The Black Eyed Peas trio: "Expo Dubai" is an inspiration for us

The Black Eyed Peas performed an exceptional party yesterday, on the occasion of the 35th anniversary of the friendship that unites its members, and the resounding success it achieved over the past years, to entertain the audience of "Expo 2020 Dubai" with a vibrant party in Al Wasl Square. And in line with the theme of mobility. , which counts 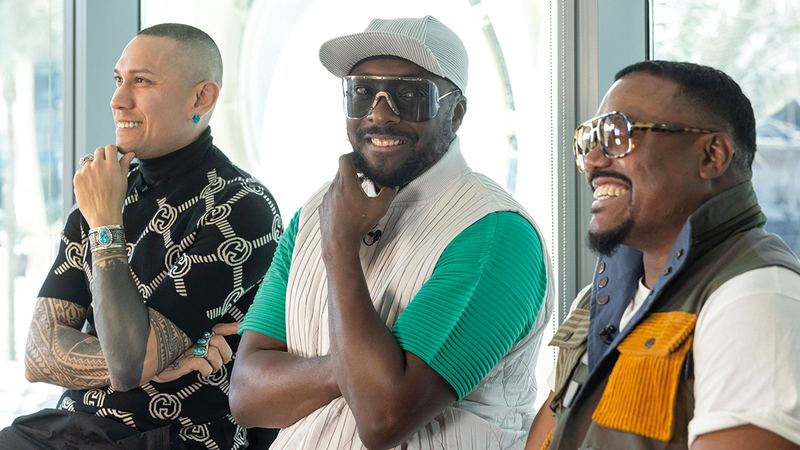 The international band attributes their success to teamwork and strong friendship

The Black Eyed Peas trio: "Expo Dubai" is an inspiration for us

The Black Eyed Peas performed an exceptional party yesterday, to mark the 35th anniversary of the friendship that unites its members, and the resounding success it achieved over the past years, to entertain the Expo 2020 Dubai audience with a vibrant party in Al Wasl Square.

In keeping with the theme of mobility, which is one of the international sub-themes of the event, the concert presented the trio of troupes from Los Angeles, will.i.m., Apple.d.up and Tabu, in a lively and enthusiastic atmosphere, inspired by the beats and fast-paced technology and music that explores new musical horizons.

The band stated that being in different countries, trying new places such as "Expo 2020 Dubai", listening to music, and feeling different feelings, is an inspiration for them.

The band, famous for using various musical techniques, added that the unique and modern sounds of the Black Eyed Peas are the fruit of their participation in a lifelong learning process.

She stressed, "We are students of music and creative scenes, and since we were teenagers, we have always dreamed of developing this culture, trying to discover new dance moves or the latest music trends."

Will.i.m. said, “If you think about our career, you will find that the topic of mobility suits us perfectly, because if it were not for the arrival of Apple.d.up from the Philippines, we would not have become the band that we are today,” adding: “The best example of mobility is that You are able to move from one place to another, and realize your dreams, despite the limitations around you.”

Although Well.I.M. is the most famous of the trio, the three of them insist that their success is due to teamwork and their strong friendship.

Will.IM said, "No one can choose his family, but we can choose friends, and a true friend is the one who shares your goals and dreams."

He said, "I arrived at Dubai airport the day before yesterday, and I met many members of the Filipino community who were asking me: Are you the one who sings in the band with Apple.

He explained that "the origin of the Black Eyed Peas is due to the charitable work of a lawyer named Joe Ben Hudgens, from the Pearl S. Buck Foundation, where he sponsored Apple.D.Up, at the age of five, before he was adopted at the age of 14." .

For his part, Apple.D.B. said, "I would like to extend a special thank you to the Pearl S. Buck Foundation, who helped move me to Los Angeles, and for that reason we look forward to doing the same to other people."

He added: "Before we got the spotlight, we were communicating with the (Five Acres) orphanage in Altadena, to collect money and toys and distribute them to the children, and after we became famous, we thought of doing more than that, especially to serve children who do not have families, and do not have tools to express themselves.

“Since then, we started doing charitable work on a larger scale, as we have 34 schools in the Philippines, and I also have a school in the neighborhood where I grew up,” Apple.

He stated, "Through our partnership with the Los Angeles Unified Schools Department, we were able to reach 200 schools across Los Angeles, and our services became available to about 11,000 students receiving (robotic) and computer science skill sets."

The band’s star was Tabu, promising the Al Wasl Square audience with “tons of enthusiasm,” saying: “Whether five people, 5,000 or even a million people attended the concert, similar to the Ipanema Beach concert in Brazil in 2007, which witnessed the largest crowd in the history of our concerts, we We will make sure to show the highest level of enthusiasm possible.”

After he personally won his battle against the disease, Tabu is involved in educating Native American communities about how to fight cancer.

Born in the United States to Mexican parents, this artist has a Shoshone Indian heritage on his mother's side.

In this context, Tabu said: “I took it upon myself to be a source of inspiration to others, and to instill hope in them. After the wonderful Dr. Agus played the greatest role in resolving my battle against disease, I decided to take his course by giving hope to people in general, and young people in particular. particularity.”

The Black Eyed Peas stated, “A lot of things are happening now, like (non-fungible tokens) and cryptocurrency, and we want to immerse ourselves in this world, where we used augmented reality before anyone else beat us to it, and we immersed ourselves more in artificial intelligence. In our videos, like 'Rock That Body', we can't wait for people to see our next releases."

• 35 years have passed since the friendship between the band members.