Cameroon: in the secret of tooth cutting, an ancestral pygmy rite that continues

In Cameroon, the few Baka Pygmies who still reside in the depths of the Eastern region, continue to observe the ritual of tooth cutting. So far, this top-secret practice has only… 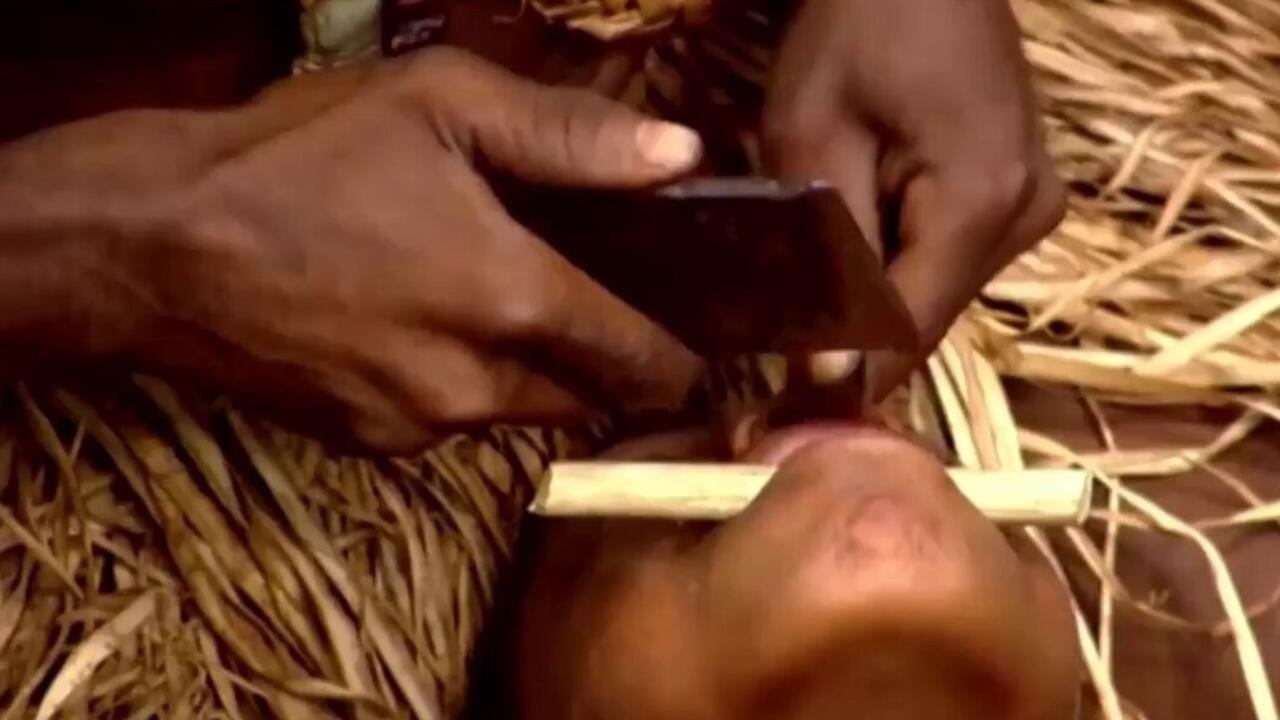 Cameroon: in the secret of tooth cutting, an ancestral pygmy rite that continues

Émile Elenga in the middle of a tooth-cutting session in the Nomejoh forest, in Cameroon.

In Cameroon, the few Baka Pygmies who still reside in the depths of the Eastern region, continue to observe the ritual of tooth cutting.

Until now, this very secret practice had almost never been carried out in the presence of people outside the tribe.

Our reporter was able to attend one of these ceremonies in the immense forest of the village of Nomejoh, where electricity and running water do not exist, let alone the telephone network.

From our correspondent in Cameroon,

In Nomejoh, in the heart of the great forest of eastern Cameroon, 400 kilometers from the capital Yaoundé, a space of about ten square meters in area has been specially developed by the Baka Pygmies.

They are more than a hundred that day.

The forest is bustling.

We sing, we dance, we shout.

The huts are nicely decorated with raffia leaves.

The decor is very specific to pygmies.

A ceremony of cutting teeth takes place there, which represents a fundamental rite among the Baka after circumcision in boys.

Émile Elenga, who officiates that day, is seated, while Bissa Kenda, the initiate of the day, is lying on the ground, on a few dry raffia sheets.

He is about to have his six canines and upper incisors trimmed.

A rite that will allow him to enter the world of adults.

During this time, the women mime the "

“, a song to lull those who have their teeth cut.

Like Bissa Kenda, young people must show extraordinary courage and must not let their suffering show through, despite the excruciating pain that is felt when a shrill cry tears apart the joyful atmosphere of the moment.

Everyone undergoes this ordeal, women as well as men

", specifies Émile Elenga, in the middle of the ceremony.

” day, the cutters of teeth file their instruments composed of a knife or a flint, and a stone or a piece of hard wood. “

I was trained by my dad in this practice. And today, I perpetuate it. I also train young people here so that the work continues to exist

Tourists or even simply strangers to the Pygmies are not invited to this rather special ritual intended for the private sphere.

This is a long and delicate process – “

”, according to the testimonies of the former tailors present on site that day

because the root of the tooth must not be damaged.

“The operation” is as impressive as it seems painful.

Coming out of childhood and "

For the Baka, it is not only childhood that they leave that day, but also “

explains a former present at the ceremony.

These states of mind, which always threaten to trigger the wrath of imperfectly realized human beings, are a brake on their personal fulfillment.

At the age of puberty, girls and boys come under a sneaky influence, the Baka think, and in their eyes, blunt canines are a sign of bad temper.

The young Bissa Kenda proudly shows off his cut teeth.

This practice dates back thousands of years before Christ. “

At the start, it was a question of allowing better cutting, shredding of the meat,

. But over time, having your teeth cut has become an effective way to seduce.

This fine connoisseur of the Pygmy tradition indicates that “

this ritual must absolutely be practiced before marriage.

It is an obligatory passage, in particular so that the man takes the right path of life if he wants, with his wife, to live in peace and in harmony. By having his teeth cut, the Pygmy becomes a

"real person". And this allows him to eradicate his hidden vices and sins. Anger, terrible hatred, passing through jealousy, selfishness, gluttony, avarice, laziness, pride, all of this is kept away from him through the cutting of his teeth

A tradition which therefore remains a pillar of the life of the Baka Pygmies.

An existence that alternates between fishing, hunting, gathering and ancestral practices.

Those who, like Émile Elenga, get down to the task, see in it a means of reinforcing the spiritual and cultural order among the Pygmy peoples.

The initiates, like Bissa Kenda, willingly submit to it, as long as it is a question of perpetuating the tradition of the Pygmies which, despite everything, is dying slowly.