Today, Saturday, the first test flight in the African continent, operated by the national company "EgyptAir", launched from Cairo International Airport with "environmentally friendly" services and products on board the plane, led by Pilot Mohamed Manar, Minister of Civil Aviation, heading to Paris with 219 passengers on board.The Ministry of Civil Aviation said 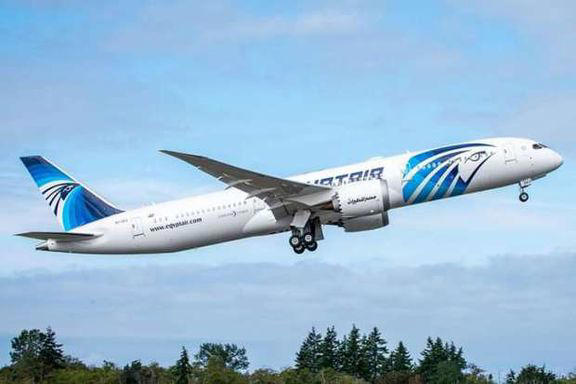 Today, Saturday, Cairo International Airport launched the first test flight in the continent of Africa, operated by the national company "EgyptAir", with "environmentally friendly" services and products on board the plane, led by Pilot Mohamed Manar, Minister of Civil Aviation, heading to Paris with 219 passengers on board.

The Ministry of Civil Aviation in Cairo said, in a press statement today: "The plane took off on its flight number "799 MS" of the Boeing 787-9 "Dreamliner", known as the Dream Plane, on a flight that will be recorded in the history of EgyptAir as the first flight operated by the national company with environmentally friendly services and the first between African airlines.

She added that this flight coincides with the Ministry of Aviation's celebration of the 92nd National Day of Egyptian Civil Aviation, which falls on January 26 of each year.

Pilot Manar stated that the strategy of the Ministry of Civil Aviation in the field of environment comes "based on the Egyptian efforts in all international forums to confront the phenomenon of climate change and keep pace with Egypt's vision 2030."

Manar added that the success of this flight with environmentally friendly services and products will be the beginning of their dissemination in the future, in line with the Ministry of Aviation’s plan to confront the effects of climate change through the presence of an integrated and sustainable environmental system that applies all local and international recommendations and legislation in the field of aviation related to environmental protection and pollution reduction.

In turn, the pilot, Amr Aboul-Enein, head of the holding company for EgyptAir, who will pilot the plane on the return flight from Paris, expressed his happiness to operate the first flight with environmentally friendly services and products, so that EgyptAir is the first airline in Africa to operate this flight.

He pointed out that in the future, all the company's flights will be environmentally friendly, which confirms EgyptAir's leadership in the air transport industry, being the first airline established in Africa and the Middle East, and the seventh in the world, as the company celebrates this year its 90th anniversary.

He added that the company aims for 2022 to be the start of many "sustainable development initiatives", as a timetable has been set for all flights to Europe with environmentally friendly products and services by 2025, to be generalized on all flights of the airline network, respectively.

EgyptAir's plan aims to reduce the use of "single-use" plastic materials on its flights by 90%, and the company identified 27 products made of (single-use) plastic that were used on its planes and replaced them with environmentally friendly products.