The coalition announced the implementation of 28 new operations in Yemen, indicating that the operations targeted the Houthis in Marib, while the Houthis spoke of dozens of dead and wounded in coalition raids on Sanaa and Hodeidah. 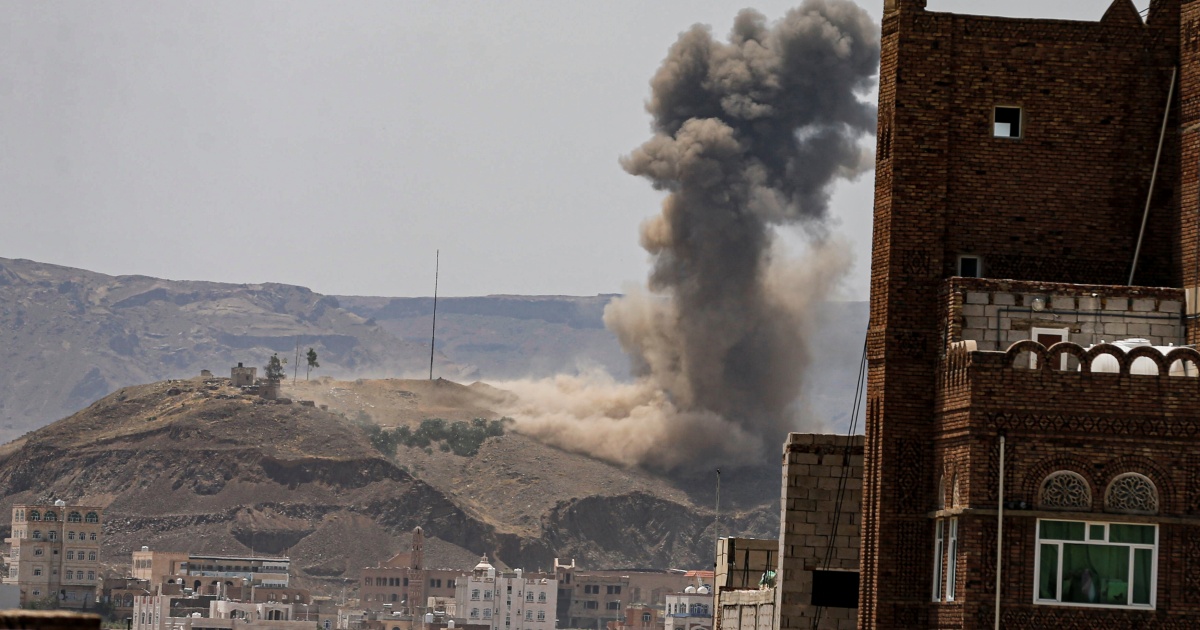 The coalition announced the implementation of 28 new operations in Yemen, indicating that the operations targeted the Houthis in Marib, while the Houthis spoke of dozens of dead and wounded in coalition raids on Sanaa and Hodeidah.

Al-Masirah TV reported that at least two people were killed and 12 wounded in a raid targeting the communications building in the city of Hodeidah.

According to Houthi sources, 3 raids targeted the vicinity of the Naval College and the communications headquarters in the province.

The Houthi TV also announced the suspension of internet services in Yemen due to what it said was the coalition's targeting of the facilities of the international internet gateway there in Hodeidah.

The coalition had said that it had launched precision air strikes to destroy the Houthis' military capabilities in Hodeidah.

Al-Masira channel, the Houthis' spokeswoman, had broadcast images that it said were of the operations to retrieve victims who fell in a coalition raid that targeted late Thursday evening the communications building in the city of Hodeidah, western Yemen, causing 4 deaths and at least 17 injuries.

In turn, the Save the Children organization said that 3 children were killed in an air strike on Hodeidah.

In the context, Al Masirah TV also said that dozens of people were killed and wounded as a result of raids by coalition warplanes targeting the reserve prison in Saada Governorate, northern Yemen.

And the media affiliated with the Ansar Allah Al-Houthi group confirmed earlier that the coalition warplanes targeted the prison with three air strikes at dawn today, Friday.

Local sources said that rescue teams and ambulance crews are continuing to work to extricate the victims from under the rubble of the prison building.

For his part, the Houthi spokesman stressed that what happened will prompt the Yemenis to respond in every possible way.

For its part, Doctors Without Borders announced that 70 people were killed and 138 wounded in the raid on a prison in Saada.

The UN envoy said in a tweet on Twitter that the meeting discussed ways to end the war in Yemen and ensure stability in the Arabian Peninsula.

"I appreciate the opportunity to discuss ways to end the war in Yemen and ensure stability in the Arabian Peninsula with Prince Khalid bin Salman. We have agreed to work closely together and look forward to continuing cooperation."

The two sides agreed to work closely together, and the UN envoy also expressed his aspiration to continue cooperation between the two sides.

There is currently the UN envoy in the Saudi capital, Riyadh, where he held talks last Tuesday with Yemeni Foreign Minister Ahmed Awad bin Mubarak, and with the Secretary-General of the Gulf Cooperation Council Nayef Al-Hajraf, on ways to solve the Yemen crisis.

On January 12, Grundberg warned - in a briefing before the Security Council - that Yemen is increasingly disintegrating politically, economically and militarily, stressing that the war in it is entering a new cycle of escalation.

United Nations Secretary-General Antonio Guterres expressed his concern about the continued air strikes in Sanaa, Hodeidah and other areas in Yemen in recent days.

These actions have resulted in civilian casualties and damage to civilian infrastructure, said Stephane Dujarric, spokesman for the Secretary-General of the United Nations, stressing that Guterres renews his call on the parties to exercise the utmost restraint.

On Thursday, the US State Department announced that its envoy to Yemen, Timothy Lenderking, had started a tour - including the Gulf states and Britain - to revive the political process in Yemen.

The State Department said that Lenderking intends to pressure the parties concerned to stop the military escalation and participate in a comprehensive peace process.

Yemen has been witnessing for nearly 7 years a continuous war between the pro-government forces backed by an Arab military alliance led by the neighboring Saudi Arabia, and the Iranian-backed Houthis, who have controlled several governorates, including the capital, Sanaa, since September 2014.

The conflict has killed tens of thousands, displaced millions and pushed Yemen to the brink of famine.