The opposition saw the government's proposal - it is unclear how everyone will vote&nbsp;

The opposition does not think that the government's proposal for electricity price support is fair. The skyrocketing prices have been caused by an "unreasonable" energy policy, according to the Moderates who want to see a reduction in the electricity tax. - Our proposal would hit all households and is more fair, says the party's Elisabeth Svantesson. 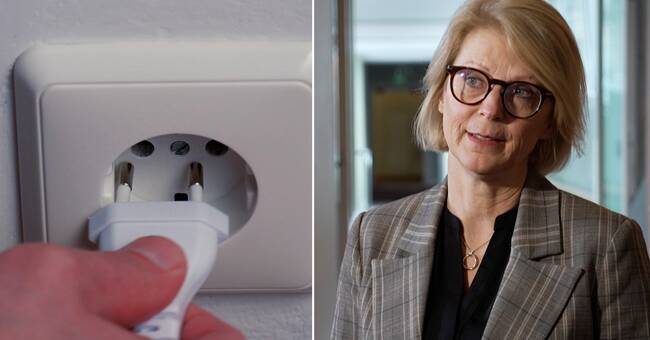 The Government's proposal for electricity price support for households is now ready.

To receive any support at all, the household must have consumed at least 700 kilowatt hours (kWh) in one month.

The opposition parties describe the proposal as strong-willed and unfair, but do not yet want to say whether they will support the proposal in the Riksdag.

According to SVT's domestic policy commentator Elisabeth Marmorstein, it is quite likely that the government's proposal will still go through:

- The moderates have admittedly submitted their own proposal in the finance committee for a temporary abolition of electricity tax, which has the support of KD, SD and L, but M has not completely closed the door to accept the proposal from the government, she says.

What measure it will eventually be can be decided by the Center Party, which so far has not taken a position but pointed to ambiguities with both proposals and called for a compromise.

Elisabeth Svantesson, economic-political spokesperson for the Moderates, believes that the high electricity prices are a consequence of the government's "unreasonable" energy policy.

- I still do not understand why the Social Democrats do not want all households affected by very high electricity prices to be compensated.

A tax cut is a better way to go, according to the party, which wants to abolish the tax on electricity in January and February.

- Our proposal would hit all households and is more fair, says Svantesson.

- With the government's proposal, it is uncertain when the money can come.

But above all, it is very certain that three million households will not receive any compensation at all, says Svantesson.

Mattias Bäckström Johansson, energy policy spokesman for the Sweden Democrats, says that the government's proposal for electricity price support is better than doing nothing at all.

However, he thinks that the proposal came far too late.

SD would rather have seen a proactive reduction in the electricity tax before prices skyrocketed.

- You miss a lot of households when you do not give a single kroner to those who have used less than 700 kWh per month.

Martin Ådahl, economic-political spokesman for the Center Party, states that the party is looking at both the government's and the opposition's proposals.

- It is very important that we achieve something for the needy households.

That we find a solution here and now.

Therefore, we are prepared to look at both the government's and the opposition's proposals, says Ådahl.

Arman Teimouri, energy and business policy spokesman for the Liberals, thinks that it is the government's "failed" energy policy that has led to the high electricity prices.

He also points out that the current proposal only reaches a third of all Swedish households.

Since the lower limit is 700 kWh / month, pensioners, young people, the single and the self-employed will not be covered, he explains.

- I think it's stomach strong.

It is not fair, says Teimouri and continues:

- It is a solution that is not sustainable.

It is not fruitful to put out fires temporarily.

- On the one hand, it does not reach all households, and on the other hand, it does not include organizations and companies that can also have it quite difficult due to the high electricity prices, says Forssmed.

According to him, a refund of the electricity tax would have been a better solution to the problem.

- One should try to find a solution that applies to all households, and that hits households better where electricity prices have been particularly high, and thus becomes more fair.