The conflict in Ukraine could lead to a costly human miscalculation

Russian President Vladimir Putin's threat to invade Ukraine, and US President Joe Biden's threat to impose sanctions on Russia in response, dramatically highlights the risk of human misjudgment in causing a war that neither side wants. Each side may miscalculate what it might do now 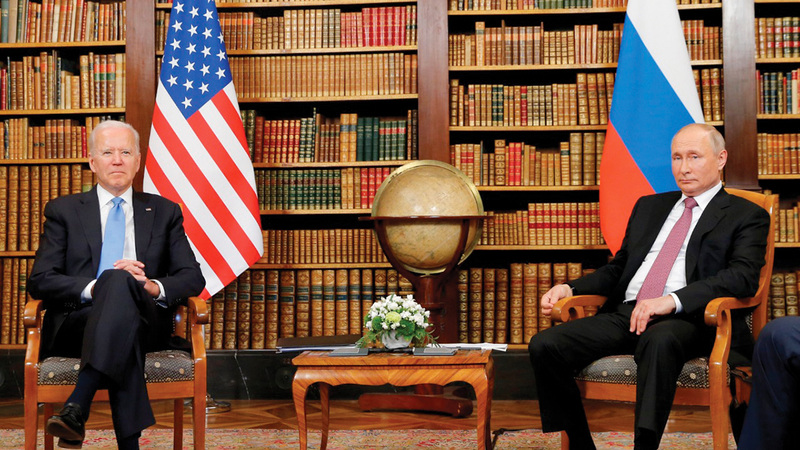 A war that Washington and Moscow do not want

The conflict in Ukraine could lead to a costly human miscalculation

Russian President Vladimir Putin's threat to invade Ukraine, and US President Joe Biden's threat to impose sanctions on Russia in response, dramatically highlights the risk of human misjudgment in causing a war that neither side wants. Each side may miscalculate what the other might do, and each side's choices are unequal to the other's. Putin's penchant for moving forward, so far, makes it difficult for him to retreat without anything to show for the clatter of swords.

Do not expect the invasion to end with Western sanctions, so the key issue is not whether the West is able to deter the invasion; This is what happens after that. Western economic sanctions are likely to lead to an asymmetric response. Reports have indicated that Russia may have already infiltrated elements of the US power grid. Malware may also be able to damage critical infrastructure and access to the Internet on which our lives depend. The West is vulnerable to cyberattacks from Russia, and it is a long-term challenge that must be met. The spread of cyber-malware can lead to a rapid and catastrophic escalation with severe damage, on all parties. We need to think of several steps forward. We must guard against the danger of human misjudgment in anticipating how each side might react to the actions of the other.

In addition, Putin claims that Ukraine is part of Russia, and is ignoring the 1994 Budapest Agreement, which guaranteed Ukraine's independence.

But we are dealing with how Putin's perceptions affect his strategy, not how logical it is.

The implication may be his desire for a lasting legacy as he heads into his 70s.

After calling the collapse of the Soviet Union a tragedy, he sees his legacy as a revival of the Soviet empire's influence and making Russia great again.

Although he withdrew his forces, his actions in Kazakhstan also indicate the same desire.

Putin is smart and resourceful, but he, too, is paranoid and emotional.

Someone wrote that nations go to war out of fear, interest, or pride.

Emotion may affect his actions as much.

And Putin appears ready to work hard over the next four to six weeks.

He is likely to avoid invading all of Ukraine in the interest of capturing its east, then intimidating the western half to influence his policies.

The occupation of all of Ukraine would be financially costly, and would invite a horrific irregular war.

And he can't afford a quagmire that sends so many bodies to Russia.

The United States needs a grand strategy for dealing with Russia, and is studying the type of possible relationship with Moscow.

Let's not treat Ukraine in pieces.

What are the broader consequences of acting on Ukraine?

How will the United States deal with rapid escalation?

And how much wise military support other than sending troops?

Will the Western response push Russia into a closer alliance with China?

Is it possible to find common ground?

And where are the illogical pitfalls?

US strategy must be tough, but smart.

It should deter Russia from exercising force and guarantee Ukraine's independence.

America, too, needs to consider Russia's perceived vital interests, and address these in ways that do not harm those of the United States or Ukraine.

One plausible outcome is for Ukraine to accept a situation similar to Austria, which maintains freedom and independence, but is incompatible with the United States and Russia.

Any strategy would have to convince Russia to resist siding with China.

Russia may not be a friend of the United States, but its security interests are in line with the United States' goal of preventing China from achieving its 2049 dream of global military and economic supremacy, ending the existing international order, and making other countries its economic tributaries.

This outcome will not serve US or Russian interests.

How is all this done?

Ideally, the Biden administration would do well to embark on a new project, such as the one started by President Dwight Eisenhower, in 1953, to craft a grand strategy to defeat communism.

It produced a successful containment strategy.

No new administration has embarked on a similar process.

It is too late, however, and the room is open for the deliberate approach that the current administration seems to favor;

He can do much to avert armed conflict in Ukraine, while mutually promoting the security interests of all parties involved.

• Since 2015, reserve soldiers from the US National Guard have rotated in Ukraine to train the Ukrainian army, along with soldiers from other countries in the North Atlantic Treaty Organization (NATO), especially Canada and Germany.

In late November, about 200 reserve soldiers from the National Guard of the US state of Florida arrived at the Yavoriv International Training Center in western Ukraine, to participate in a training and assistance mission for the Ukrainian army.

Putin is smart and resourceful, but critics argue that he is paranoid and emotional.

Someone wrote that nations go to war out of fear, interest, or pride.

Pride includes nationalism, a pernicious and powerful current in Russian politics, and sentiment may influence his actions as much.

Will the United States have to withdraw its soldiers from Ukraine?

US President Joe Biden has ruled out sending US military personnel to Ukraine in the event of a Russian invasion, but the US Department of Defense (Pentagon) may be forced to withdraw a few hundred American soldiers, which it had deployed in the country. The presence of US soldiers in Ukraine is not new. Since 2015, reserve soldiers from the US National Guard have rotated in Ukraine to train the Ukrainian army, along with soldiers from other countries in the North Atlantic Treaty Organization (NATO), especially Canada and Germany. In late November, about 200 National Guard reservists of the US state of Florida arrived at the Yavoriv International Training Center in western Ukraine, to participate in a training and assistance mission for the Ukrainian army. Last Tuesday, Pentagon spokesman John Kirby confirmed that US soldiers "are currently deployed in Ukraine as part of an advisory and assistance mission on a rotational basis, and are participating in training, and we expect this mission to continue.""We continue to monitor the situation on the ground, and we have to take decisions to protect our forces, and we will do so," he added. Last Wednesday, the White House considered that Russia could launch an attack on Ukraine at any time.

The Yavoriv center is located in the far west of Ukraine, only about 15 kilometers from the Polish border, and it seems that American soldiers will not face immediate danger in the event of a Russian invasion. Western countries report that Russia has amassed more than 100,000 troops near its border with Ukraine in the east of the country. On Tuesday, additional Russian forces arrived in Belarus, neighboring Ukraine, to conduct training exercises, according to the official version. For its part, Russia denies having any intention of launching an attack on Ukraine, and says that it is threatened by the strengthening of NATO's presence in the region since the fall of the Soviet Union.

On Wednesday, the United States announced an additional $200 million in security assistance to Ukraine.

This amount is in addition to the 450 million dollars allocated before the start of the mobilization of Russian forces at the Ukrainian borders at the end of last year.

US Defense Secretary Lloyd Austin avoided an answer when asked last month about the possibility of US soldiers in Ukraine participating in a potential conflict alongside Ukrainian forces.

He told the specialized magazine, Defense One, "I think that in situations like this, declaring red lines that should not be crossed, it only exacerbates the problem."

"We have to focus on ways to reduce tensions," he added.

American soldiers on the ground may play a role in evacuating American citizens from Ukraine, which would become necessary if the Russian military entered there.

Dale Daily ■ is a retired general who has led many special operations in peace and war times, as an ambassador, and has headed the State Department's counterterrorism efforts.