On Saturday, demonstrations will be held against the vaccination certificates in Stockholm and Gothenburg, but also in several other parts of the world. Now Säpo warns that pro-violence right-wing extremists have applied to previous corona demonstrations in Sweden. - It is an opportunity for them to reach out with their messages but also meet people who are angry and upset in order to recruit, says Susanna Trehörning, deputy head of constitutional protection and counter-terrorism at the Security Police. 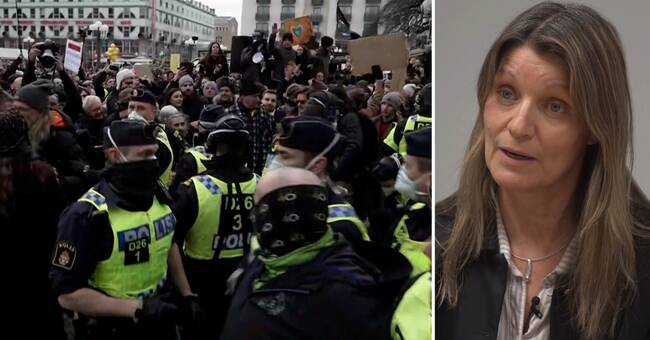 During the pandemic, several demonstrations against coronavina vaccine and restrictions have been held in both Sweden and abroad, as SVT has previously reported.

According to the police, the demonstration in Stockholm has received permission for 3,000 people and behind it is the organization Frihetsrörelsen.

At this weekend's demonstrations, the cape is aimed at the vaccination certificates and the organizers are hoping for as many as 20,000 demonstrators.

In the past, the demonstrations have attracted anywhere from a few hundred to just over a thousand people.

- I have not seen such a mobilization in this environment before, says Daniel Poohl, CEO of the Expo Foundation, which has followed the organization.

How pandemic deniers mobilize in the world

Säpo: "Important to think about"

The corona demonstrations have previously been noted for, in addition to dissatisfaction with corona politics, also collecting a number of other, often conspiracy-theoretical messages.

- They do activities together, you participate in each other's events.

Sometimes it is difficult to know what is what, says Daniel Poohl.

"Although there are many reasons to be critical of covidpass, it is worth knowing that this demonstration will be organized by conspiracy theory groups that use it as a gateway to their alternative worldview," he says.

Susanna Trehörning at the Security Police points out that they are not interested in what people are demonstrating against or for.

But within their mission is to follow pro-violence people and according to Säpo, several people in the right-wing extremist environment have previously participated in the corona demonstrations.

- We really protect freedom of demonstration and opinion, it is a cornerstone of democracy.

But it is important to think a little before - what do I want to do at this demonstration and what do I stand for, she says.

Organizer: Everyone is welcome

Max Winter is one of the leaders of the Freedom Movement.

According to him, the main message is to abolish the vaccination certificates and he does not dwell on the ideology of those who participate.

- All people take their own responsibility for their actions and opinions.

We create a forum where people with different opinions are welcome, we do not limit people - vaccinating or unvaccinated, political opinions or religious opinions.

We believe that all people have the right to stand up for this issue.

Would you consider it a problem if violent right-wing extremists participated tomorrow?