Hundreds of US diplomats suffer from "mysterious disease" CIA: not made by hostile countries

China News Service, January 21 (Meng Xiangjun) Nausea, headache, hearing loss, fatigue and weakness. Does it sound like we are "workers" and "overworked" and need a break? No, this is a mysterious disease, "Havana Syndrome", which has been claimed by US diplomats in many countries since 2016.   On January 20, local time, a number of mainstream media in the United States reported on the CIA’s pe 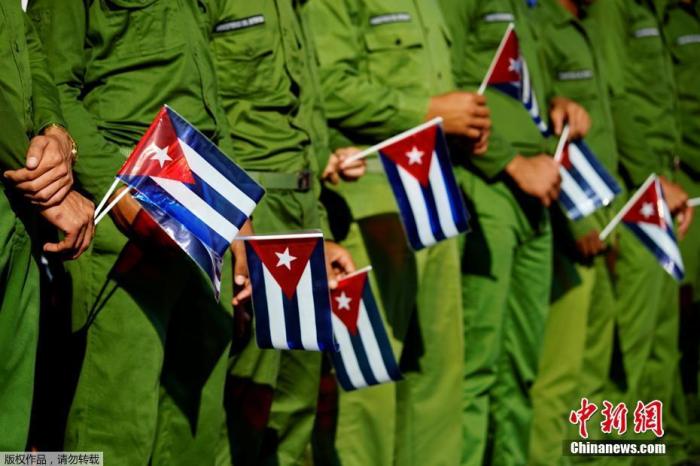 China News Service, January 21 (Meng Xiangjun) Nausea, headache, hearing loss, fatigue and weakness. Does it sound like we are "workers" and "overworked" and need a break?

No, this is a mysterious disease, "Havana Syndrome", which has been claimed by US diplomats in many countries since 2016.

On January 20, local time, a number of mainstream media in the United States reported on the CIA’s periodic investigation report on this disease.

The survey believes that most of the "Havana Syndrome" in the personnel of US embassies abroad is caused by environmental factors, unidentified health problems and stress, rather than the large-scale use of "secret weapons" by a hostile country.

But in about 20 incidents, the CIA failed to rule out foreign interference.

Therefore, this release is not final.

Data map: During the commemoration of the establishment of the Cuban Revolutionary Armed Forces, Cuban people hold the national flag.

【How did the mysterious disease come about?

In 2016, some U.S. diplomats stationed in Cuba reported experiencing nausea, headaches, hearing loss, etc. Some claimed to have heard "a high-pitched sound" and even caused brain damage.

At the time, Canadian diplomats also claimed to be in the same situation.

Because the sick American diplomat was stationed in Cuba, the United States directly dubbed it "Havana Syndrome".

Although Cuba strongly denies it, the administration of former U.S. President Trump believes that this is caused by the use of "secret weapons" by "hostile countries" Cuba.

At the end of 2020, the National Academy of Sciences, Engineering and Medicine released a report that it may be caused by "directed microwave radiation".

The microwave hearing effect, or Frey effect, was described as early as 1961 by American neuroscientist Alan Frey. Although the cause of the effect is unclear, the military encountered it during World War II and the "Cold War". Similar situation.

People who stay close to working radar for long periods of time are said to have "auditory hallucinations".

In 2021, the news of "Havana Syndrome" will continue to spread.

In January, shortly after the Biden administration took office, it received relevant reports.

The British Broadcasting Corporation (BBC) pointed out that Vienna is a hub for information and intelligence, where the United States has deployed a large number of diplomatic and espionage resources.

In September, the CIA had to evacuate an intelligence operative in Serbia after he had a neurological seizure with symptoms similar to "Havana Syndrome."

Recently, a member of a team visited by CIA Director William Burns was accused of being "hit".

According to CIA data, "Havana syndrome" has occurred in at least 300 American diplomats, intelligence officers and military personnel in the past few years.

[Cuba appeals: health issues should not be tied to politics]

When the Trump administration blamed Cuba, withdrew some diplomats and imposed sanctions on Cuba, tensions between the two countries escalated.

Cuba strongly appeals not to tie scientific and health issues to politics.

However, Cuba has launched a lengthy investigation of more than three years, with the results released in September 2021.

An expert group from the Cuban Academy of Sciences analyzed that some American staff members who felt uncomfortable had brain problems that existed before they went to Cuba.

Others are for well-known medical reasons, many of which are spread among people and explain most of the symptoms.

The panel noted that "there is no known energy to selectively cause brain damage" such as a laser beam with the spatial precision.

Whether sound, ultrasonic, infrasound, or radio waves (including microwaves), it is impossible for all forms of energy to damage an individual's brain without being felt or heard by others.

It is also impossible not to cause other injuries such as ruptured eardrums, skin burns, etc.

What's more, even if such a weapon exists, it will be very large, but neither the Cuban police nor the FBI nor the Royal Canadian Mounted Police have found any evidence in Havana.

After the release of the CIA report, one of the agency's most "famous" former employees, Edward Snowden, who is still wanted for exposing the NSA scandal, commented on social media.

Snowden suggested that journalists who had published "sensational" material on "Havana Syndrome" could "take a break".

"The authors of the 36,000 angry articles hyping the "rival state's plot to drain and contaminate our precious bodily fluids (though this warrants more skepticism)," he said, "should probably stop and reflect that their articles are How to Affect Discourse".