Two million Yemenis have been displaced to it.. Will the army continue its advance after the Houthi retreat in Marib?

It seems that the Houthi attacks that they announced on Abu Dhabi, the capital of the UAE, were part of their response to their retreat on the fronts, the most important of which is oil-rich Marib, where two million Yemenis live. 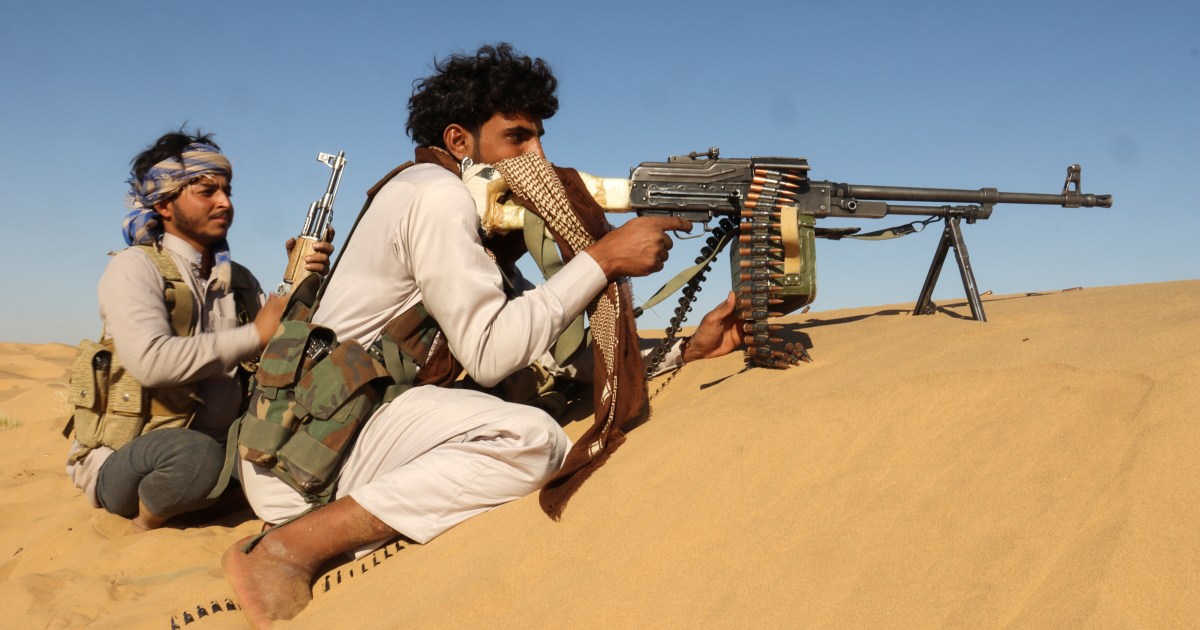 Abdul Ghani Muhsin hangs out with other tribal fighters near a tent they set up in their camp in the desert south of Ma'rib, and from afar, intermittent gunfire roars over the moonlit night.

Abdul-Ghani speaks in a calm and reassuring tone, after the government forces and tribesmen broke the Houthis' continuous attack on the city of Marib for months, and it has become impossible to talk about the city's fall into the hands of the Houthis.

He told Al Jazeera Net, "In recent days, we have made great progress, and we are now about to besiege the Houthis in Jabal al-Balaq (18 km south of Ma'rib) after we circumvented them, and if we regain control of the mountain, we will have gone a long way in securing the city."

The Houthis had launched a massive attack to control the oil-rich city of Marib, and the last stronghold of the Yemeni government in the north of the country, since the beginning of this year, and the fall of the city became only a matter of time, and this threatened a humanitarian catastrophe in the city, which shelters more than two million displaced people.

How have military realities on the ground changed?

Government forces backed by tribesmen made tight defenses against the Houthi arc striking the city, which extends from Ragwan and Madghal in the north, and Sirwah in the west, and reaches the Balk Mountains in the south.

The air strikes of the Saudi-Emirati coalition constituted an aid factor for the government forces in dealing with the repeated Houthi attacks that relied on large manpower and missile bombing, which resulted in the killing of 14,700 Houthi elements from mid-June to early November, according to what the Saudi-UAE coalition said. An official in the Ministry of Defense of the Houthis in Sanaa told Agence France-Presse.

But a military source in the Yemeni government's Ministry of Defense - who preferred to remain anonymous as he was not authorized to speak to the media - told Al Jazeera Net that the Houthis had been subjected to the greatest attrition since the outbreak of the war in the country at the end of 2014, noting that the last months had been hell for the Houthis, as he said .

"The defeat of the Houthis happened after they were exposed to a massive holocaust, especially with the coalition intensifying its air strikes," he added.

The Houthi military spokesman, Brigadier General Yahya Saree, said a few days ago that the coalition launched 7,100 air raids in 2021, most of them in Ma'rib governorate, while the Houthi official Al-Thawra newspaper said that more than 5,000 air raids were in Ma'rib.

By tracking the daily toll announced since the beginning of this January, the Houthis mourned 366 leaders of different ranks, while they did not announce any death toll from the fighters.

What gave government forces the advantage on the ground?

The progress of the Emirati-backed Giants forces in Shabwa governorate gave the government forces strengths, and according to the government military source, the Houthis’ retreat from the Shabwa districts, which are administratively adjacent to Ma’rib governorate from the south, eased pressure on the city of Ma’rib.

He added, "The arming of the Giants brigades is incomparable to ours. They possess heavy and modern weapons, armored vehicles, rocket launchers, thermal missiles, tanks, and intelligence and logistical support. The coalition bombs at a rate of 50 to 60 air raids, all of which destroy the enemy's offensive and defensive forces, their gathering points and columns of their vehicles."

The military source details that this large force was equivalent to that of the Houthis, and the battle was moved to the area between the governorates of Ma'rib, Shabwa and al-Bayda, which is about 90 km away from the city of Ma'rib.

What will change the military landscape in Yemen?

The residents of Marib city finally breathed a sigh of relief after the Houthis retreated from the southern side, but the risk of storming the city still exists if the government forces are unable to force the Houthis to withdraw from the Serwah district in the west, which they have controlled for six years.

According to the head of the Military Press Division in the Moral Guidance Department in the government forces, Lt. Col. Rashad Al-Mikhlafi, the Houthis recently lost the attacking element in a large way, due to the cutting off of their supply route from the south following the advance of government forces and the forces of the giants.

He told Al Jazeera Net that a large number of Houthis in the southwestern front are now besieged, while the army is re-securing the southern gate of the governorate again.

But Al-Mikhlafi says that the continued progress of the Giants’ forces is subject to a decision by the Saudi-Emirati coalition, and if the government forces advance towards the strategic Al-Bayda Governorate (southwest of Marib), this will change the map of the military landscape in Yemen, including Marib.

How did the Houthis respond to their losses in Marib and Shabwa?

The Houthis mobilized thousands of their fighters towards Ma'rib and Shabwa, launched hundreds of drones, and planted large areas with explosive mines in the Harib district (south of Marib) to prevent the advance of government forces and giant brigades, but this did not stop the brigade's attack.

Yesterday, Monday, the Houthis announced targeting areas in Abu Dhabi that support the forces of the giants, and threatened to expand the bank of targets inside Emirati territory, if their losses continued in Shabwa.

The military spokesman for the Houthis, Yahya Saree, warned that they would consider the UAE an unsafe country as long as it continued its aggression against Yemen, as he put it.

Mahdi Al-Mashat, head of the Supreme Political Council (the highest authority in the Houthi areas), described the attack on Abu Dhabi as "a message to the Emirati regime about the danger of continuing its aggression against Yemen."

In an interview with Al-Jazeera, a member of the Houthi political bureau, Muhammad al-Bakhiti, said that the bombing of Abu Dhabi was in response to the UAE's support for the giant brigades in the governorates of Shabwa and Ma'rib.

Has the Houthis ended their hopes of controlling the city of Ma'rib?

The military expert and former head of the Department of Moral Guidance in the Yemeni government forces, Major General Mohsen Khasrouf, says that the qualitative transformation in the Marib battle will change the military equation, especially if the government forces continue to advance towards other governorates.

He explains to Al-Jazeera Net that the military strategy in Marib is based on tight defenses, shifting to the offensive, and exploiting the opportunity of the giant forces' advance in Shabwa;

All of these factors make the Houthis' hopes of controlling Ma'rib in the news.

"The Houthis are currently trying to get their besieged militants out to the al-Juba area (45 kilometers south of the city of Ma'rib) after the supply lines were cut off," he added.

Khasrouf says that the city of Ma'rib is insurmountable, and that its victory in the war may reshape the military landscape in Yemen.