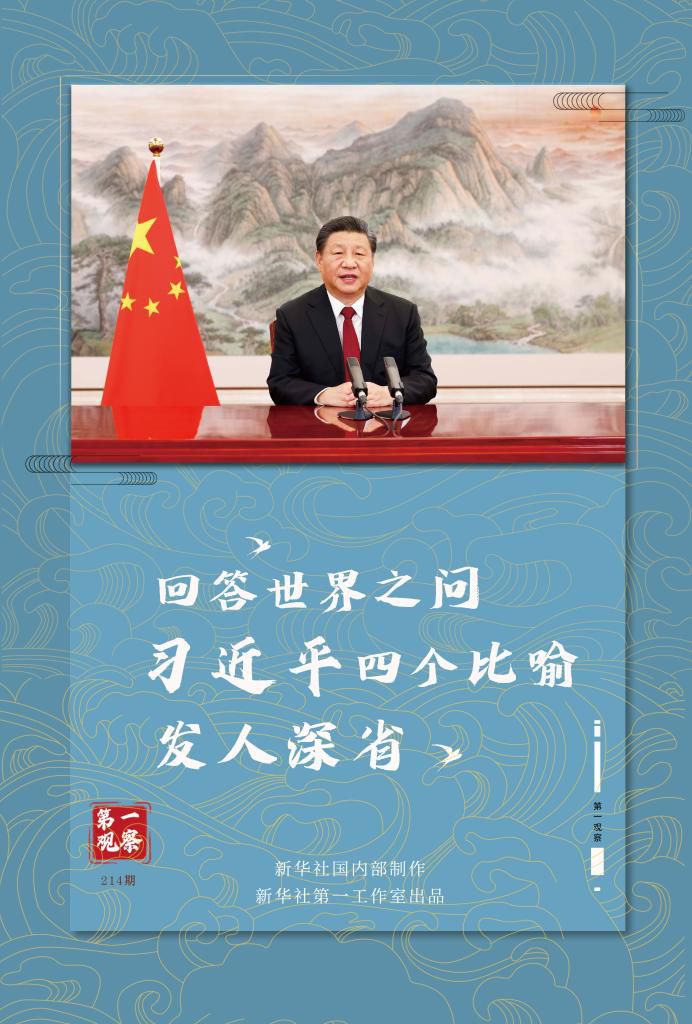 Five years ago, on January 17, President Xi Jinping attended the 2017 annual meeting of the World Economic Forum in Davos, Switzerland. Faced with the question of "what happened to the world, what should we do?" People in distress bring confidence and strength.

This time, also on January 17, President Xi Jinping attended the 2022 World Economic Forum video conference and delivered a speech. Faced with another world question of "How to defeat the epidemic? How to build a post-epidemic world?", he called on all parties to strengthen confidence, Forge ahead bravely and point the way for a better world in the post-pandemic era.

(1) The metaphor of "big ship" - "In the turbulent waves of a global crisis, countries are not riding on more than 190 small boats, but on a big boat with a shared destiny. Small boats can't stand the wind and waves, only the big ships can withstand the waves. live in stormy seas”

"We are on the same boat" - In November 2018, at the APEC Business Leaders Summit held on board the Pacific Explorer cruise ship, President Xi Jinping once used the "ship" as an analogy and called on all parties to "work together" and jointly deal with Risk challenge.

Today, President Xi Jinping once again uses the metaphor of the "boat".

This time, he talked about the relationship between "small boat" and "big boat".

After experiencing the continuous delay of the new crown pneumonia epidemic, human beings feel more than ever what it means to "stand together in the same boat".

In a world frequently visited by "black swans" and "grey rhinos", in the face of all kinds of predictable storms and unimaginable stormy seas, "small boats" can only be shaken by wind and rain, and "giant ships" can break through the waves.

However, not everyone has such historical awareness.

The people rowed the boats.

Tightening each other when the tide is flat and the sea is wide is the historical vision of the watcher;

It is the historical responsibility of the navigator to grasp the direction when the wind and rain are violent.

(2) The metaphor of "big river" - "Economic globalization is the trend of the times. When a big river rushes to the sea, it will always encounter a reverse current, but no reverse current can stop the big river from going east. Power helps it move forward, and resistance makes it strong."

"The green mountains can't cover it, after all, it flows east."

In the observation of the natural world, the ancient Chinese realized the laws of the world and the philosophy of life.

The general trend of the world is vast.

The premise of "advance in the logic of historical progress and in the trend of the development of the times" is to correctly understand and scientifically grasp the laws of history.

With the world economic recovery facing many constraints and increasing uncertainty, the metaphor of the "big river" shows President Xi Jinping's profound grasp of the general trend of economic globalization.

Five years ago in Davos, President Xi Jinping talked about economic globalization and used the "sea" as a metaphor for the world economy——

"The sea" shows the breadth and depth of economic globalization;

The "big river" demonstrates the resilience and potential of economic globalization.

Climbing high and spectacular between the heavens and the earth, the vast river will not return.

Even if there are adverse currents and rapid shoals, "power helps them move forward, and resistance makes them strong." The direction of economic globalization has never changed and will not change.

The key is to move in the right direction, insist on dismantling walls without building walls, opening up without isolation, and integrating without decoupling, so that the vitality of the world economy can be fully burst out.

"No matter what changes in the international situation, China will hold high the banner of reform and opening up", "We welcome all kinds of capital to operate legally and in accordance with regulations in China and play an active role in China's development", "Further integrate into the regional and world economy, and strive to achieve mutual benefit and win-win results" ...

An open China has always stood firmly on the right side of history.

(3) The metaphor of "cake" - "First make the 'cake' bigger, and then divide the 'cake' through reasonable institutional arrangements, so that the tide will rise and everyone will get their own place, so that more development results can benefit all people in a fairer way."

"Common prosperity" is becoming a hot word both at home and abroad when discussing China's economic and social development.

At the new historical starting point of China's development, what method will be adopted to promote the all-round development of human beings and achieve more obvious and substantive progress in the common prosperity of all people?

The metaphor of "cake" vividly points out the path for China to achieve common prosperity, and helps people from all walks of life at home and abroad to accurately understand the connotation of China's common prosperity.

Five years ago in Davos and Geneva, when President Xi Jinping discussed the world economy, he also used the metaphor of "cake"-

"When the world economy is in a downturn, the global economic 'cake' is not easy to grow, and even becomes smaller."

In President Xi Jinping's broad vision, China and the world are connected by people's hearts and destinies --

To achieve the all-round development of people, we must take the road of high-quality development——

Talking about China's economic trend that all parties are concerned about, President Xi Jinping said in his speech, "We are full of confidence in the future of China's economic development."

To realize the all-round development of human beings, it is necessary to promote the harmonious coexistence of human and nature——

"Developing the economy cannot deplete the resources and the ecological environment, and environmental protection does not mean abandoning economic development and seeking fish for nothing."

This is a dialectics full of traditional Chinese cultural wisdom.

Strengthening pollution prevention and control, promoting systematic governance, and achieving carbon peaking and carbon neutrality... Actions to promote the construction of ecological civilization are, in the final analysis, to better build human civilization.

In order to realize the all-round development of human beings, one person and one country cannot be left behind——

The world is still not peaceful, many people are still living in poverty and hunger, and the epidemic has made it even worse.

In his speech, President Xi Jinping again mentioned the global development initiative, pointing out that "no matter what difficulties we encounter, we must adhere to the people-centered development philosophy", showing the profound feelings of the people and human beings of Marxist politicians.

(4) The metaphor of the "Year of the Tiger" - "Faced with the severe challenges facing human beings today, we must be stronger and stronger, bravely overcome all obstacles on the way forward, make every effort to remove the haze of the new crown pneumonia epidemic, and make every effort to promote economic and social recovery. Development, let the sunshine of hope illuminate human beings”

Today's human beings are experiencing unprecedented changes in the times; today's world has entered a new period of turbulent change.

Courage and strength are crucial before changing situations and chaotic situations.

In two weeks, the Chinese Lunar New Year of the Tiger will arrive.

In Chinese culture, the tiger symbolizes bravery and strength.

President Xi Jinping used the "tiger" as an analogy to combine traditional Chinese culture with the changes in the world situation, providing valuable nourishment of Chinese civilization for all mankind to overcome various difficulties and obstacles.

"The world always develops in the movement of contradictions. Without contradictions, there would be no world. Throughout history, human beings have grown up by overcoming trials and crises, and developed by overcoming crises." Not completely passive in it.

The metaphor of the "Year of the Tiger" reflects the historical initiative of the Chinese Communists in the new era to have the courage to overcome all difficulties and obstacles and promote the progress of human civilization while deeply grasping the general trend and laws of history.

Five years ago, in Davos, President Xi Jinping said: "When encountering difficulties, don't blame yourself, don't blame others, don't give up confidence, don't evade responsibility, but overcome difficulties together. History is made by brave people."

Today, attending the "Cloud" conference, President Xi Jinping inspired and inspired the whole world to strengthen confidence and move forward courageously with the words of "living dragons and tigers", "roaring tigers and leaps", "like tigers with wings" and "tiger tigers growing in power".

In a world undergoing great changes, what human beings need most today is this confidence.