The Roads and Transport Authority in Dubai has directed motorists to be careful while driving in foggy and rainy weather, and called on them to drive safely in the coming days and weeks, which may witness rain and increase the chances of traffic accidents, due to tire slippage. 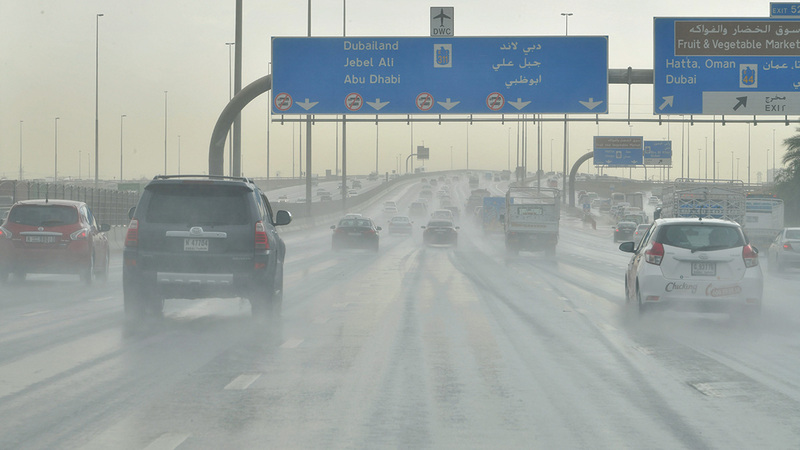 She warned against excessive speed and not leaving enough safety distance

The Roads and Transport Authority in Dubai directed motorists to be careful while driving in foggy and rainy weather, and called on them to drive safely in the coming days and weeks, which may witness rain and high chances of traffic accidents, due to slipped tires on wet roads.

The authority confirmed that it will broadcast awareness messages on social media and through communication channels, to educate members of the public about traffic safety rules and guidelines, during the change of weather conditions with the advent of the winter season, and the increased chances of rain.

The Executive Director of the Traffic and Roads Agency, Maitha bin Uday, said that the authority focuses in the awareness campaign on a set of guidance points that help drivers avoid accidents caused by weather conditions, weather changes, the need to leave an additional safety distance, pay attention to road surprises, and avoid getting busy with something. Other than driving, the vehicle’s windows and mirrors must be clean, and the speed within reasonable limits, and less than the speed limit for the road.

Bin Uday pointed out that the awareness messages focus on alerting drivers about the requirements of driving in rainy weather, and the need to focus with caution and attention while driving, as excessive speed on wet roads leads to surprises that the driver cannot avoid at the appropriate speed and time.

The authority called on drivers to inspect and maintain their vehicles, especially lighting lamps, windshield wipers, tires, and vehicle brakes, because they are tools that increase the driver’s ability to see and control the vehicle in rainy weather. It also called on drivers to reduce speed, and leave a sufficient distance between vehicles, and always expect traffic to stop at any time.

2- Be vigilant and do not let anything in your vehicle distract you, such as a mobile phone, etc.

3- Make sure that the vehicle windows and mirrors are clean, and use the spaces and external lighting.

4- If the fog is thick and you cannot continue moving, stop your vehicle off the road.

5- Watch your speed constantly, your speed may be more than you think, and if it is, slow down.

6- Use fog lights, next to the regular lights of the vehicle.

7- Do not use high beam headlights in foggy environments, which causes poor visibility.

8- Do not use the four-way light signals except in emergency cases.