Three Russian landing craft sailed into the Baltic Sea via the Danish Strait on Wednesday night. - But given the increasing tensions in the immediate area, we wanted to follow up and monitor these ships, says Therese Fagerstedt at the Armed Forces. 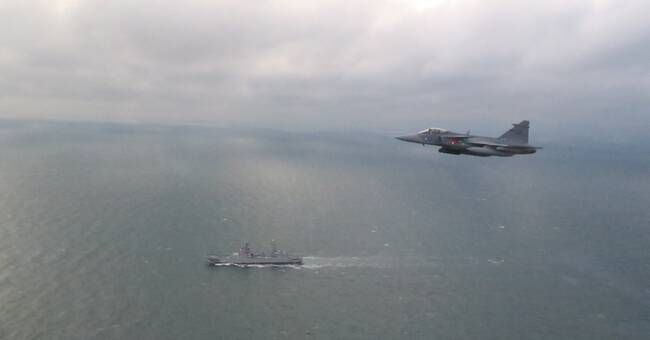 The landing vessels that have been observed are normally based on the Russian Kola Peninsula.

In recent days, they have traveled along the Norwegian coast and entered the Baltic Sea via the Danish straits.

The Swedish Air Force, together with several other countries 'defense forces, has followed the Russian ships' journey.

So far no action has been taken.

- We have different types of sensors and systems that help us monitor the ships.

We have also been able to follow them via our pilots in the air force and take pictures, says Therese Fagerstedt, press secretary at the Armed Forces.

This is due to the changed security situation in the Baltic Sea.

- We are always interested in movements in our immediate area, and this in itself is nothing out of the ordinary.

But given the growing tensions in the immediate area, we wanted to follow up and monitor these ships.

We also do this to give our commanders a good basis for any decisions on measures from the Armed Forces, says Therese Fagerstedt.

The Swedish Air Force, together with several other countries 'defense forces, has followed the Russian ships' voyage in the Baltic Sea.

On Monday, official talks began between the United States and Russia on the military escalation at Ukraine's border.

The Swedish defense leadership has described the security policy situation as "very tense".

According to Therese Fagerstedt, it is difficult to say why Russia has chosen to re-base the ships right now.

This is not strange.

Sometimes they do it in connection with exercises, sometimes to move equipment.