"Aleut", "Ruslan", "Vityaz": what are the advantages of modern tracked all-terrain vehicles of the Russian army

A subdivision of the railway troops of the Central Military District has received a two-link tracked snow and swamp-going vehicle "Aleut", according to the website of the Ministry of Defense of the Russian Federation. It is noted that the machine is made according to a modular scheme, is easy to operate and perfectly suits the conditions of a harsh continental climate. Aleut is one of the novelties in the class of tracked all-terrain vehicles supplied to the Russian army. In addition to him, the Russian Armed Forces service the Vityaz family of modern two-link vehicles and the TTM-4902PS-10 Ruslan snow and swamp-going vehicles. The newest domestic tracked all-terrain vehicle is the TM-140 engineering reconnaissance vehicle. According to experts, Russian military snow and swamp vehicles are distinguished by high maneuverability, reliability and ease of control. 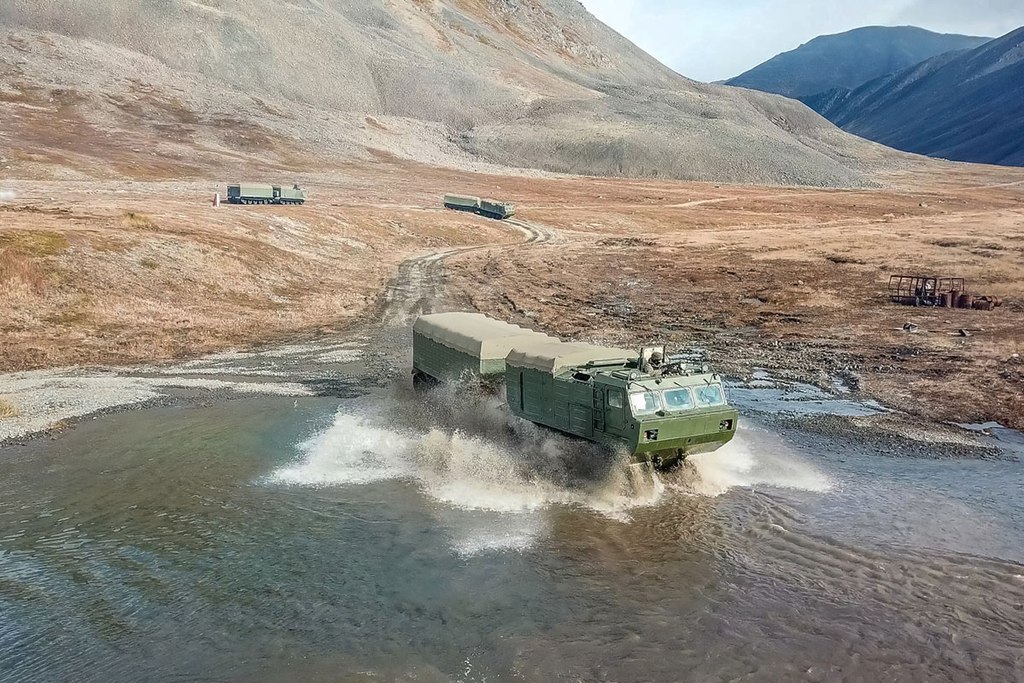 This was reported by the press service of the Central Military District (CVD).

"The newest Aleut will perform a whole range of tasks in the course of the daily activities of the compound, during various exercises, including building bridges, crossing for troops marching to the area where combat training missions are being performed," the website of the Russian Ministry of Defense says. ...

The front link of the GAZ-3344-20 is an energy compartment, the rear one is a passenger module, which can be easily converted into a sleeping, medical unit or command post.

In total, "Aleut" is capable of transporting up to 20 people, including the driver, and the total carrying capacity of the all-terrain vehicle is 2.5 tons.

As noted in the defense department, "Aleut" is equipped with a well-proven diesel engine of domestic production, an automatic transmission and simple controls.

“The operating temperature (of the Aleut all-terrain vehicle -

) is from minus 40 to plus 40 degrees Celsius and is perfect for the local sharply continental climate.

Movement afloat is carried out using a caterpillar propeller.

The Aleut was developed as part of the Korobochka development work.

In the Russian troops serving in off-road conditions, this machine has occupied a niche between large-sized snow and swamp vehicles and small vehicles.

The all-terrain vehicle is assembled at the facilities of the Zavolzhsky plant of caterpillar tractors (ZZGT) located in the Nizhny Novgorod region.

According to the manufacturer, the most important element of the GAZ-3344-20 is the swing-coupling device.

It provides unique cross-country ability and safety when maneuvering on weak soils.

To replace the "motorcycle league"

At present, various modifications of the MT-LB (multipurpose light armored transporter-tractor) are widely used in the Russian army as a tracked off-road vehicle.

In our troops, this all-terrain vehicle received the nickname "motorcycle league".

The car can carry 11 people, not counting the two crew members.

In addition, the platform carries a significant range of weapons, including missile systems.

At the same time, the number of military equipment mounted on two-link tractors of the Vityaz family is growing in the Arctic formations of the RF Armed Forces.

This technique is produced by the company of the same name, which is part of the Rostec contour.

This platform ensures the movement of cars at extreme temperatures (from -50 to +50 ° C) and on soils with low bearing capacity (swamp, virgin snow, off-road, rugged woodland).

ATVs can overcome a wall (vertical obstacle) up to 1.5 m high and a ditch up to 4 m wide.

“The first link of the Vityaz is equipped with an insulated cab, an engine compartment (MTO) and a body (cargo area).

The second link is used as a cargo compartment or for the installation of various equipment or weapons, "- says the materials of" Rostec ".

The carrying capacity of Vityaz class vehicles varies from 3 to 30 tons, the maximum speed on land reaches 44 km / h, in water - up to 6 km / h.

The machines are equipped with wide rubber-metal tracks, which provide stability on soft surfaces.

In addition, the designers managed to bring the ground pressure indicator to 0.3 kg / sq.

cm, that is, a level that is safe for Arctic flora.

In the Russian army, the Vityaz is used to mount the Arctic versions of the Tor-M2 and Pantsir-S anti-aircraft systems.

In addition, the Ministry of Defense of the Russian Federation purchases two modifications of this platform in versions of conveyors: DT-10PM and DT-30PM with a carrying capacity of 10 and 30 tons, respectively.

Rostec expects that in the future the armed forces of the Russian Federation will be supplied with two-link light-duty vehicles that can be used for transporting personnel, weapons, towing artillery systems and trailers.

Another modern two-link snow and swamp-going vehicle with high cross-country ability, which is included in the fleet of the Russian army, is the TTM-4902PS-10 Ruslan.

It was developed at the Nizhny Novgorod plant of transport and technological machines.

As reported in the materials of the Ministry of Defense of the Russian Federation, the cross-country ability of the all-terrain vehicle in especially difficult road and climatic conditions is ensured by low ground pressure, high ground clearance and a mechanism that folds the links when turning without changing tractive effort and speed.

“The system of forced folding of the links in the vertical plane expands the capabilities of the all-terrain vehicle when overcoming various obstacles.

The height of the obstacle to be overcome is up to 1.8 m, ”the military department notes.

Like the Aleut, the TTM-4902PS-10 is made according to a modular scheme, where the front link is represented by the power department, and the rear link is a unit that can be transformed for the needs of troop transport, for medical purposes or for use as a command post.

The width of the Ruslan is 2.94 m, the total length of the two sections is 11.57 m. The engine power produced by the Kama Automobile Plant allows the car to overcome wetlands of almost any category of complexity.

Also, the conveyor feels comfortable, moving through the two-meter depths of the snow cover.

The editor-in-chief of Za Rulem magazine Maxim Kadakov, in an interview with RT, explained the popularity of two-link vehicles in the troops with high cross-country ability in comparison with traditional tracked tractors, as well as large capacity and carrying capacity with relatively modest dimensions.

“Of course, two-link vehicles are an ascetic and rather rough technique, but these all-terrain vehicles are reliable and easy to operate, quite fast off-road.

In general, for a long time, the army did not have enough such machines in the niche between large tractors and very small equipment.

Now this gap is being filled, ”Kadakov explained.

The newest military tracked snow and swamp vehicle, which does not belong to the class of two-section platforms, is the TM-140 engineering reconnaissance vehicle developed by Kurganmashzavod and the engineering company Project Sistema (Yekaterinburg).

In November 2019, the TM-140 began serving on the border with Kazakhstan in the Kurgan region, and in 2021 the snow and swamp-going vehicle was demonstrated to the general public at the international military-technical forum "Army" in Kubinka near Moscow.

This vehicle is designed on the basis of a civilian vehicle.

The performance characteristics of the military modification were not disclosed.

But it is known that in the basic version it can carry six people and 4 tons of cargo.

According to Rostec, all-terrain vehicles TM-140 "have no analogues in the domestic market in terms of cross-country ability and level of comfort."

In a commentary on RT, Dmitry Litovkin, editor of the newspaper Nezavisimoye Voennoe Obozreniye, noted that the effectiveness of Russian snow and swamp-going vehicles of various classes is due to the high requirements of customers, off-road conditions and harsh climatic conditions that are characteristic of most of the territory of the Russian Federation.

“Without reliable tracked all-terrain vehicles, the Russian army would not have been able to move troops and material property through swamps, forests, mountain passes.

It is also impossible to carry out the engineering equipment of the area normally.

For example, it is this technique that now allows our railway troops to reconstruct the northeastern branch of the Baikal-Amur Mainline, ”the expert summed up.