Severe spread of infection after Christmas increases the pressure on hospitals. Several of the country's regions are in staff mode, two of which have escalated to reinforcement mode. SVT Nyheter lists what it looks like where you live. 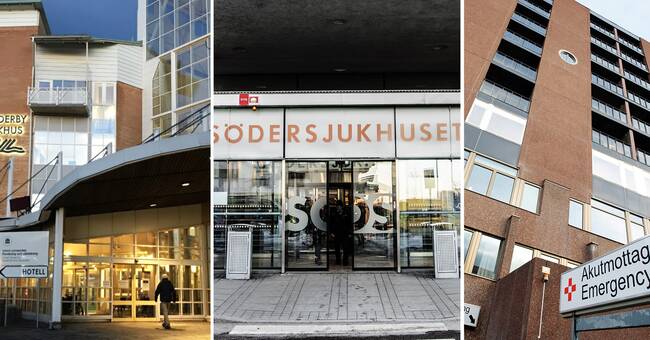 The next day, Södertälje Hospital also decided to follow suit, as the burden on intensive care and the emergency room has increased sharply in recent days.

- The need for care is great and we have a serious situation now.

I would urge everyone to follow the general guidelines regarding the spread of infection.

Covid-19 and seasonal flu have similar symptoms and it is important that we keep our distance, avoid crowds, stay at home at the slightest symptom, use mouth guards in public transport and not least - vaccinate us, says Christophe Pedroletti, the hospital's CEO, in a press release.

267 people were cared for with covid-19 in the Stockholm region on Thursday 6 January.

At 15.00 on 6 January, the emergency hospitals reported 187 vacant care places.

No hospitals within the Uppsala Region are currently in staff mode.

However, the region is in a difficult situation, where several interacting factors create a strong pressure on healthcare.

“The spread of the covid virus is increasing sharply, and the proportion of PCR samples positive for covid is now about 18 percent.

But there is also the seasonal flu and other respiratory viruses - a total of 58 patients are now in hospital with any of these viruses.

The spread of infection also means that many employees are ill, caring for relatives or waiting for test results ", the region writes on its website.

At present, the normal situation prevails in Sörmland.

However, the spread of the coronavirus and absenteeism among hospital staff continues to increase.

As a result, the region is now preparing to be able to circumvent rules for home quarantine for hospital employees in exceptional cases.

- It will be the absolute last measure so that we do not spread the infection unnecessarily, but it can not be reasonable for people to die because the healthcare staff are at home and feel completely healthy, says infection control doctor Signar Mäkitalo to SVT Sörmland.

The Östergötland region introduced special healthcare management and went up to staff on 14 December.

This applies to all three regions in the region: the University Hospital in Linköping, the Vrinnevis Hospital in Norrköping and the Hospital in Motala.

Region Kronoberg Hospital is not in staff mode.

The spread of infection in the county continues to increase sharply, the number of patients more than doubled between weeks 51 and 52. Last week, 933 individuals were tested positive compared with 344 week 51. Of those sampled last week, the proportion was positive about 15 percent.

The spread of infection looks set to continue to increase this week as well.

A high proportion of those sampled are positive right now.

We also see that more people are admitted to hospital, even though it is fewer compared to last year, which is probably due to the fact that many are vaccinated, says Hampus Hjorton, assistant infection control doctor, in a press release.

None of the region's three hospitals has a staff situation.

However, the regional staff situation has prevailed since mid-November.

"It is about getting an overall picture in a more efficient way and taking measures that can include several administrations," writes press secretary Rolf Asmundsson in an email to SVT.

The entire Blekinge Region has been in a staff situation since November 8, due to a high workload on health care.

The decision includes the county's only hospital, Blekinge Hospital with operations in Karlshamn and Karlskrona.

- We go into staff mode to be able to act quickly and make the decisions that the situation may require.

This means that we are very active, says Chief of Staff Stefan Österström, in connection with the decision.

For Skåne, it looks different in different parts of the region:

Since December 2, Sus has activated special crisis management and handles loads and other issues in that structure.

Special crisis management has also been activated during other phases of the pandemic.

Halland Hospital is not currently in staff mode.

The spread of infection in the region rose to new heights during the New Year week.

A total of 3182 positives were tested and this is the highest recorded number of infections in a single week so far, according to infection control doctor Maria Ryberg Mo at Region Halland.

- We see that the infection has picked up speed properly.

It is very worrying, she says to SVT Halland.

The Västra Götaland region decided on a staff situation on 30 December.

The reason is that the situation in healthcare is strained due to high sickness absence.

Several healthcare administrations have decided on staffing for their own operations, including NU healthcare and Skaraborg hospital.

- To ensure regional leadership and the opportunity for urgent priorities and allocations of resources within the Group, a decision is made on the regional staff situation for the time being, says Erik Lagersten, Chief of Staff Regional Crisis Management Staff, Västra Götaland Region, in a press release.

On 5 January, the NU healthcare in western Sweden announced that it would instead enter a reinforcement mode, which is an escalation from the staff situation that the organization has been in since 30 December.

"The cause has a direct connection to the corona pandemic, which has led to high sickness absence in the hospital and in surrounding municipalities, at the same time as the pressure on care is high," reads a press release.

This means that the hospital takes reinforcement measures within some or all of the necessary functions.

The third level is disaster management.

Region Värmland has not gone up to staff position.

Communications Director Hedvig Bergenheim describes the situation in the hospital is strained, but under control.

There are plans to escalate if, for example, the number of covid patients increases rapidly.

"Before Christmas, inpatient care made a temporary reprioritisation, which means that the focus is on emergency care, cancer care and high medical priority care," says Bergenheim.

In Region Örebro County, there is no hospital in staff mode.

In several regions, you can see an increase in the burden on healthcare, but not in Örebro, says area manager Tobias Kjellberg.

- It is very difficult to answer why it looks the way it does, but we are lucky, he says to SVT Örebro.

Last week, week 52, a record number of cases of covid-19 were found in Örebro County since the pandemic started, but there is a readiness in healthcare to receive more patients.

Kjellberg says that they do not know what the situation will look like in the future, but that they are prepared.

- We hope that the vaccination will have as good an effect as possible.

We change care based on the requirements that the infection entails.

But at present it is a relatively low burden and falls short of the Public Health Agency's forecasts.

Region Västmanland decided on 30 November to go into staff mode due to the spread of covid-19.

- It is after an overall assessment of the entire effort in health care right now, says health and medical care director Håkan Wittgren in connection with the decision.

He adds that the staff situation is an important step to take before the major holidays, which are usually the toughest time of the whole year for care.

The Dalarna region is currently not in staff mode.

- But we have a fairly heavy burden on healthcare and since about two or three weeks ago have chosen to expand management meetings at the central level.

This is to be able to have short and quick decision paths for optimal support for healthcare.

Thus, continued control in the line, but strengthening of management teams at the central level, says Helena Hellström, chief physician in the Dalarna Region.

After the major holidays, the region sees a doubling of the number of cases.

Several of them are believed to be linked to mountain tourism.

None of Region Gävleborg's hospitals are currently in staff mode.

On 5 January, the region announced that the spread of infection was increasing sharply in the county, and that care was seeing an increase in patients requiring hospital care or care in the intensive care unit.

Infection control doctor Shah Jalal urges residents to be more vigilant for symptoms of covid-19, as well as to test for symptoms.

- The development indicates that fewer people try out in the test stations located in the county.

The spread of infection has increased greatly in recent times and the risk of being infected with covid-19 has increased, while the symptoms can be discreet.

I ask everyone to try their hand at symptoms and follow the recommendations so we can reduce the infection, Jalal says in a press release.

On Friday, the region went up to the next level, which means that they can coordinate with, among other things, resources from private advisers.

- We are in a very strained situation in the entire health care system, especially at the hospital in Sundsvall.

The patient load is high and we have difficulty securing staffing.

We are therefore now raising our emergency situation, which among other things makes it easier for us to get help from the private care providers in the county, Bellander states.

On December 16, it was decided that the region's only hospital, Östersund Hospital, would go into staff mode.

There is a shortage of care places at Skellefteå Hospital.

At the same time, the pressure on care has increased and the hospitals have sick leave among the staff.

On January 4, Skellefteå Hospital decided to go into staff mode, and the next day Norrland University Hospital in Umeå did the same.

- There is pressure in both places, it is tough with care places.

It has been tough throughout the Christmas and New Year weekends and it holds up, says health and medical care director Brita Winsa in an earlier interview with SVT Västerbotten.

The Norrbotten region decided that the entire region will go into staff mode on 20 December.