Second in a month: Putin and Biden will have a telephone conversation in the late evening of December 30

Late in the evening of December 30, Vladimir Putin and Joe Biden will have a telephone conversation. According to the White House, the conversation is scheduled for 23:30 Moscow time, it will be held at the initiative of the Russian side. According to an American administration official, the leaders of the two countries will discuss the upcoming contacts of the delegations on security issues in January. As a reminder, on December 7, the presidents of Russia and the United States held a two-hour video call. The prevailing topic of the dialogue was the situation around Ukraine. 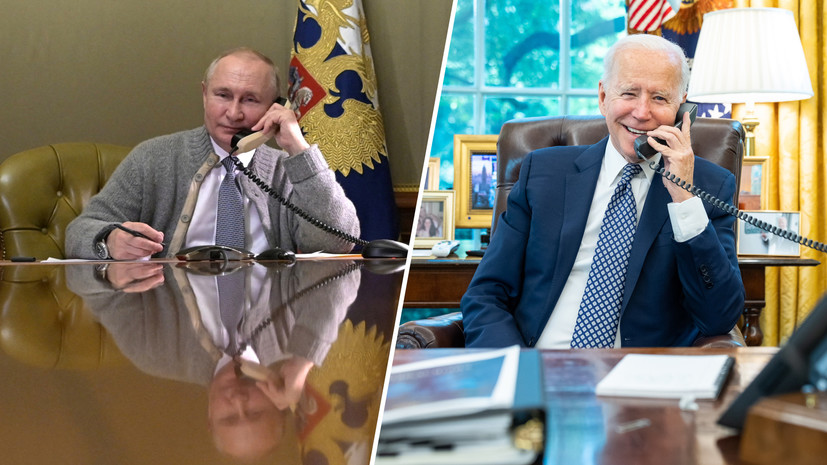 Late in the evening of December 30, the second conversation in a month between Vladimir Putin and Joe Biden will take place.

This was announced by the press secretary of the Russian President Dmitry Peskov.

Ahead of the upcoming telephone conversation, the Kremlin also reported that Putin wished his American counterpart a Happy New Year and Merry Christmas.

According to the head of state, Moscow and Washington can and should interact in a constructive manner, since they bear a "special responsibility" for international and regional stability.

“I am convinced that in the development of our agreements reached during the June summit in Geneva and subsequent contacts, we can move forward and establish an effective Russian-American dialogue based on mutual respect and consideration of each other’s national interests,” the congratulatory telegram says.

As follows from the schedule of the American leader, the conversation is scheduled for 15:30 local time (23:30 Moscow time), it will be held in a closed mode for the press.

"Telephone conversation of the President (Biden. -

) with Russian President Vladimir Putin to discuss a number of issues, including upcoming diplomatic contacts with Russia," the document says.

According to a senior US administration official, the contact will take place at the Kremlin's initiative.

“President Biden has always believed that there is no substitute for direct dialogue and interaction between two leaders, and this is especially true when it comes to Russia and his interaction with President Putin,” he said.

The leaders of the two states are expected to discuss the upcoming talks between Moscow and Washington on January 10 on security issues, as well as a meeting of the Russia-NATO Council (January 12) and a meeting of representatives of the Russian Federation and the OSCE (January 13).

“The two presidents will discuss the upcoming dialogue with Russia on a range of security and strategic issues,” the American official explained. - In my opinion, both presidents believe that the direct interaction of the two leaders is truly valuable, that we are now experiencing a crisis that has been going on for several weeks, given Russia's increasing military presence, and that solving this problem and finding a way to de-escalation requires a high level involvement ".

One of the topics of conversation will be Ukraine in the context of Russia's allegedly building up of its military presence on the border.

According to the American official, the United States is ready to respond if the Russian side attempts to "invade" Ukraine.

So, tough economic sanctions will be applied, plans have already been agreed to strengthen NATO's positions in the eastern direction, as well as expand military assistance to Kiev.

“We are ready to discuss security and strategic issues, which in recent days and weeks have become the subject of both private and public discussions and discussions.

President Biden will make it clear that if President Putin is interested in a diplomatic path to de-escalate tensions in the region, there is such a path, "a senior White House official said.

In addition, he admitted that the heads of state will continue to discuss the situation around Iran, taking into account the ongoing contacts in Vienna, where the prospects for a full return to compliance with the provisions of the Joint Comprehensive Plan of Action on the Iranian nuclear program are being discussed.

“So I think the presidents will want to synchronize watches, make sure that we can strengthen the close coordination that is taking place in the five plus one process,” concluded a senior US administration official.

"They will discuss a number of very serious problems"

According to Adalbi Shkhagoshev, a member of the State Duma Committee on Security and Anti-Corruption Adalbi Shkhagoshev, during the conversation between Putin and Biden, the agenda of upcoming contacts between representatives of Russia and the United States will be sharpened.

“The Russian side sets itself the goal that the agenda for the upcoming talks is structured in such a way that there is a minimum of diplomatic deviations from important topics raised by Moscow.

In short, a very serious attitude so that the result of this dialogue is still there, "said the interlocutor of RT.

Professor of the Department of Comparative Political Science of RUDN University Yuri Pochta, in an interview with RT, emphasized that Putin and Biden will have to discuss "a number of urgent and very serious problems."

“This is strategic stability, we suddenly again approached the risk of a third world war.

Of course, this is Ukraine, because the West still believes that the world is unipolar and there should be no interests of Russia in the post-Soviet space.

Also on russian.rt.com "The tone is extremely specific": Peskov spoke about the conversation between Putin and Biden on Ukraine

According to Dmitry Peskov, the conversation between the leaders of Russia and the United States was open and substantive, the leaders talked in detail on all the planned topics.

The conversation lasted for about two hours, its main topic was Ukrainian issues against the background of a lack of progress in the implementation of the Minsk agreements.

Also during the conversation, the topics of cooperation in the field of cyber security, the work of diplomatic missions and the state of affairs around the JCPOA on Iran's nuclear program were raised.

In addition, the Russian leader pointed out to his colleague that NATO is "building up its military potential" near the borders of the Russian Federation, making "dangerous attempts" to develop the territory of Ukraine.

"Russia is seriously interested in obtaining reliable, legally fixed guarantees that exclude NATO's eastward expansion and the deployment of offensive strike weapons systems in states adjacent to Russia," the Kremlin said in a statement.

Later, Dmitry Peskov said that Moscow plans to convey to the United States and NATO its conceptual vision of security in Europe.

On December 15, draft agreements were sent to Western partners, on December 17, the Russian Ministry of Foreign Affairs published both documents.

The draft of the first agreement contains a proposal on interaction between Moscow and Washington on the principle of "indivisible and equal security", as well as on the exclusion of the use of the territory of third countries for the preparation or implementation of an armed attack against the other party to the treaty. In the second, Russia and NATO are invited to confirm that they do not consider each other as enemies, and the members of the alliance take obligations that exclude its expansion, the bloc's conduct of any military activity on the territory of Ukraine, as well as other countries of Eastern Europe, the Caucasus and Central Asia. In addition, Moscow advocates the non-deployment of Russia and the alliance of armed forces on the territory of other European countries, with the exception of the forces that were there as of May 27, 1997.

On December 21, Vladimir Putin stressed at a meeting of the board of the Ministry of Defense that Russian proposals on security guarantees are not an ultimatum to Western countries.

“Armed conflicts, bloodshed are absolutely not our choice, we do not want such a development of events.

We want to resolve issues by political and diplomatic means, but at least have clear, comprehensible and clearly stated legal guarantees.

This is the meaning of our proposals, set out on paper and sent to Brussels and Washington, and we hope to receive a clear, comprehensive answer to them, ”the head of state said.