Violent battles between the Yemeni army and Houthi militias in Marib

The fronts of the southern and western axes in the Yemeni governorate of Ma'rib witnessed violent battles between the Yemeni army and the Houthi militias, concentrated in desert locations between Al-Balaq and Al-Amoud in the southern sandy axis, in which attacks and infiltration attempts by Houthi elements were broken and thwarted by the army and elderly tribes. 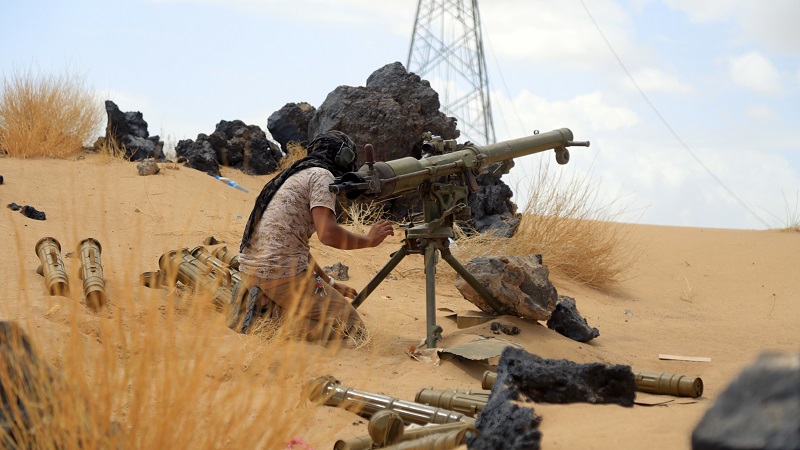 Violent battles between the Yemeni army and Houthi militias in Marib

One of the elements of the Yemeni army in Ma'rib.

The fronts of the southern and western axes in the Yemeni governorate of Ma'rib witnessed violent battles between the Yemeni army and the Houthi militias, which were concentrated in desert locations between Al-Balaq and Al-Amoud in the southern sandy axis. .

Field sources stated that the militias incurred dozens of deaths and injuries in their last attempt to advance towards the eastern al-Balaq Mountain, where their attacks were repelled and inflicted heavy losses, noting that the battles continued on the fronts of "Al-Ayrif, Wadi Dhanna, and Rawdat Jahm."

In the western axis, the pace of battles intensified in several locations on the Al-Kasara and Al-Mushajah fronts in the Serwah district, in which tight ambushes were carried out for Houthi groups, causing large numbers of dead and wounded among the militias, as well as families of others, while the coalition fighters continued to carry out support air operations in Marib fronts, achieving direct and accurate hits at Houthi sites and mechanisms.

In Al-Jawf, the battles continued in separate locations in the Khub Wal Sha’af district, the largest district of the governorate, the fiercest of which were concentrated in the vicinity of Al-Khanjar camp, and the Al-Yatama area in the northern axis.

The militias sent new reinforcements to the seam areas, and coalition fighters were able to target them, destroying a number of them, and leaving Houthis dead and wounded.

Fighting units of the Yemeni forces began to station themselves in Shabwa governorate, in preparation for the start of a major military operation against Houthi militia sites in the "Usailan, Ain and Bayhan" districts.

Field sources said that a major joint military operation will be launched by the government forces and the resistance with the support of the coalition fighters, aiming to liberate Baihan and cut off the Houthi supply routes coming from Shabwa and Al-Bayda towards the fronts south of Marib.

In the west of Taiz, battles continued between the joint forces on the one hand, and the Houthi militia on the other hand, in the Muqbna district, in which the joint advanced towards strategic and ruling areas during the past two days, and field sources confirmed control of the Al-Zanabeel area in the Al-Taweer front in Al-Kadha, southwest of the district.

In Sana’a, coalition fighters demolished weapons depots containing specific weapons for the Houthis at the headquarters of the Air Defense Camp and the Aviation College, in the Asr region, west of the capital, and the coalition confirmed that it had taken preventive measures to spare civilians and civilian objects from collateral damage.

The coalition fighters continued to paralyze the Houthis’ combat capabilities, by targeting Houthi sites, warehouses and vehicles in the Salh district, east of Taiz governorate, and destroying Houthi vehicles and weapons in the vicinity of the Hays district, south of Hodeidah. And heavy combat vehicles in the Khub and Al Sha`af district in Al-Jawf, and 28 raids were launched against Houthi sites, targets and mechanisms in the vicinity of Ma'rib.