Pelé has returned home from the hospital: on social media a photo with his wife

He had been hospitalized since August 31 after being diagnosed with colon cancer. The Twitter message: "I wish you love and peace" 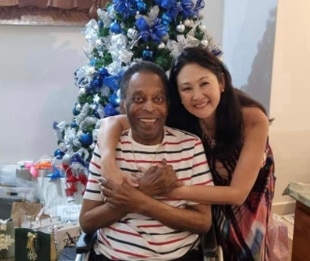 Brazil26 December 2021 "After announcing on social media his exit from the hospital, where he underwent chemotherapy for colon cancer, Pele appeared smiling in a Christmas photo posted on Twitter." Today I wish you moments of love, peace and union, like me.

Merry Christmas friends, "writes the football legend. According to local media, the 81-year-old former footballer spent Christmas at his home in Guaruja, on the coast of São Paulo.

Todas I hope you are living moments of love, peace and unity, just like me.

Pele's health has been a major concern in recent years.

In 2015 he underwent prostate surgery after being hospitalized for the second time in six months and returned for a urinary infection in 2019. The former Brazilian international forward is one of four players to have scored in four different editions. of the World Cup.

He is the greatest scorer of all time in the history of the green-gold national team, with 77 goals scored in 92 games.

He had been in hospital treatment since August 31 after being diagnosed with cancer following a routine checkup.