The last farewell to Prince Philip, the tears of Queen Elizabeth

The funeral of the Duke of Edinburgh. United Kingdom silent for a minute. The solitude of the sovereign 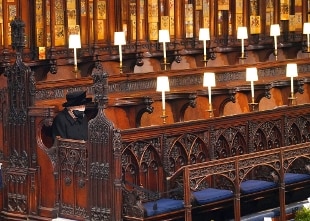 April 17, 2021 The royal family gave their final farewell to Prince Philip, the queen's consort who passed away on April 9 at the age of 99.

The funeral took place in Windsor Castle chapel in a private ceremony with only thirty official guests, all members of the royal family.

Queen Elizabeth reappeared in public for the first time after the mourning event.

In addition to her, present the four children of the royal couple and the eight nephews and German relatives of Philip.

The eldest son, Charles and his son William, with his wife Kate and other members of the royal family are in dark day clothes (uniforms have been banned so as not to embarrass Harry, who was stripped of military titles after the feud. with the Royal Family). The Duchess of Cambridge wears a fascinator with a black veil and a three-strand pearl necklace from the private collection of Queen Elizabeth II, worn in 1982 by Princess Diana at a state banquet in the Netherlands.

The ceremony opened with the deployment in the Quadrangle, the inner courtyard of Windsor Castle, of the Queen's guards waiting to escort Philip of Edinburgh's coffin, from the castle to St George's Chapel. There are dozens of riders, with the characteristic red, black and gold uniforms, and the bears on their heads that make up the King's Troop Royal Horse Artillery. Shortly before, they had traveled the Long Walk, the long road that leads to the castle, under the bright sun that today illuminates the town on the outskirts of London. There are 730 soldiers representing all the armed forces participating in the funeral of the Duke of Edinburgh: 507 soldiers of the Army, 96 of the Royal Marines, 89 of the Air Force and 42 of the Royal Navy, the armed force in which Philip served between 1939 and 1951.

The Land Rover and the carriage, designed by Philip

To wait for the coffin of the prince, the green Land Rover modified by himself. Philip's carriage was also brought into the courtyard, with hat and gloves lying on the seat, accompanied by two of his grooms and pulled by two black ponies, Balmoral Nevis and Notlaw Storm. The four-wheeled carriage in aluminum and dark green steel was built eight years ago at the specific request of Prince Philip, who, then 91, began using it to tour Windsor and other royal estates.

The coffin of Prince Philip was placed on the Land Rover which started towards the Chapel followed by the procession made up of nine members of the royal family: at the head Princess Anne and Prince Charles, followed by the princes Edward and Andrew; in the third row William and Harry, in the next row Vice Admiral Sir Timothy Laurence and the Earl of Snowdon. The queen ends the procession in a dark Bentley.

For Prince Philip's private funeral, Queen Elizabeth II asked to keep William and Harry, the two brothers, sons of Charles, separated in the midst of a media storm after the interview given by Harry and his wife Meghan to Oprah Winfrey. The two brothers are separated by their cousin Peter Phillips, 43, eldest son of Princess Anne and her first husband, Captain Mark Phillips, the eldest of Elizabeth and Philip's nephews.

The coffin, wrapped in the Duke of Edinburgh's banner, with a crown of flowers on it, the Navy cap and the saber arrived in St. George's Chapel for the funeral. Queen Elizabeth awaits him in the church where she is sitting alone.

The minute of national silence and the religious function

Announced by the whistle of the king's royal troops and punctuated by a cannon shot, the minute of national silence began in honor of the prince at the end of which the religious function began.

A topless protester disturbed the minute of silence observed by the crowd that gathered near Windsor Castle for Prince Philip's funeral. The woman, the British media reported, screamed "save the planet", as the crowd began to applaud after the minute of silence, and then climbed onto a statue of Queen Victoria, before being taken away by the police.

Queen Elizabeth II, 94, moved, is sitting alone in the choir of the chapel of San Giorgio, in compliance with the anti-Covid rules, although vaccinated. The loneliness of Elizabeth II, dressed in black and with a black mask edged in white, is palpable. Black also the hat, the inevitable handbag and the veil. Closest to the Queen, two places to her left, is Andrew, the Duke of York. Even Prince Charles, like Queen Elizabeth, did not hold back tears at his father's funeral.

To officiate the rite, the archpriest of Windsor, David Conner. Philip's long life "has been a blessing to us" and "our lives have been enriched," Conner said at the beginning of the ceremony. "We are here today in St George's Chapel to hand over the soul of his servant, Prince Philip, Duke of Edinburgh, into the hands of God. With grateful hearts, we remember the many ways in which his long life was a blessing. We were inspired by her unwavering loyalty to the Queen, her service to the nation and the Commonwealth, her courage, strength and faith, "continued the Archpriest of Windsor.

"Our lives have been enriched by the challenges he posed to us, the courage he gave us, his kindness, his humor and his humanity. For this we pray to God that he give us the grace to follow his example and that, with our brother Philip, in the end we can know the joys of eternal life ", said Conner again.

A few words of homage, in a ceremony that does not include - by the will of the deceased - a real eulogy or a traditional sermon, at whose length Philip was notoriously intolerant.

The music chosen by Prince Philip

Among the hymns that have been sung, all chosen by the deceased, those dear to the tradition of the British sailor's prayer stand out - to remember the past as a veteran of the Royal Navy and the Duke of the Second World War - and those that echo the Orthodox tradition of the Churches Greek and Russian, in memory of Philip's country of origin (born Filippos in the royal family of Greece and raised in Great Britain as an exile and refugee) as well as the blood ties that united him to Tsarist Russia, as well as to the Danish aristocracy and German. Among the music, even the hymn "Eternal Father, Strong To Save", traditionally associated with seafarers and naval forces. And the first scheduled reading, Ecclesiasticus 43. 11-26, read by the Dean of Windsor, speaks of the dangers and the "strange and wonderful creatures "seen by those who sail the sea.

The saber, the cap and the banner

The love for life at sea of ​​the Duke of Edinburgh, his strong bond with the Royal Navy and devotion to the Crown were therefore at the center of the funeral ceremony at Windsor Castle that Philip himself has planned down to the smallest detail. On the coffin lies the Navy saber, which was given to the prince by the then King George VI when he married Elizabeth, along with his cap and personal banner.

The prayer and the hymn

Philip also requested that the ceremony be included the prayer "my soul give praise to the Lord of heaven", from Psalm 104, set to music by William Lovelady, an arrangement performed for the first time on the occasion of his 75th anniversary. birthday. After the prayers, the choir sang the British national anthem "God Save the Queen" at the end of Prince Philip's funeral in St. George's Church.

Prince Philip's coffin was taken to the Royal Crypt inside St George's Chapel, where he will be buried. In the meantime, all his noble titles have been read for the last time. Philip will not remain forever in the royal crypt. On the death of Queen Elizabeth, the two will be interred together in the chapel built in honor of her father, King George VI, which already houses the remains of the Queen Mother and Princess Margaret.

Before the coffin was lowered, the chaplain greeted Philip for the last time: "Set out on your journey from this world, O Christian soul". Queen Elizabeth II then left St. George's chapel followed by the other members of the royal family.

For the Windsors, this funeral was also an occasion to reunite after the recent crises. It is the first time since his departure for the United States that Prince Harry has met the royal family in public, marked by the shadow of the accusations of racism and indifference that he and his wife made during the interview with Oprah Winfrey. Princes William and Harry followed the funeral procession "apart" from their cousin Peter Phillips, and once they arrived at the chapel the Duke of Cambridge took a seat next to his wife Kate, while Harry went to sit on the opposite side, alone. His wife Meghan has indeed remained in California.

At the end of the ceremony, Prince Harry, Duke of Sussex, was seen exchanging a few words first with his sister-in-law Kate and then with his older brother William as he exited St George's chapel.

Meghan Markle, Duchess of Sussex and wife of Prince Harry, ensured that she would follow Prince Philip's funeral from her home in California. The BBC reports that Meghan has handwritten a note to accompany the flower crown she and Prince Harry have chosen for the Duke of Edinburgh.

The flower crown of the United Kingdom

"In grateful memory of a man to whom the nation owes more than words can say, sent on behalf of the country," reads a message left with a wreath by British Prime Minister Boris Johnson outside St George's Chapel.

Johnson is not present at the funeral to allow more family members to attend.

The homage of the subjects

In front of the royal residence, there is a carpet of flowers, balloons, drawings that are left by the many who go to pay the last homage to the consort of Queen Elizabeth.

Even the shops in the area display photos of the Duke of Edinburgh in their shop windows, much loved by his subjects for his pungent irony and countless gaffes.