China News Service, December 24. According to a report by Peninsula Chinese website, in the context of the escalation of the situation and mutual accusations between Russia and Ukraine, the two countries have carried out military exercises and training respectively. This was triggered by the tension between the two countries. The crisis has also led to tensions between Russia and Western countri 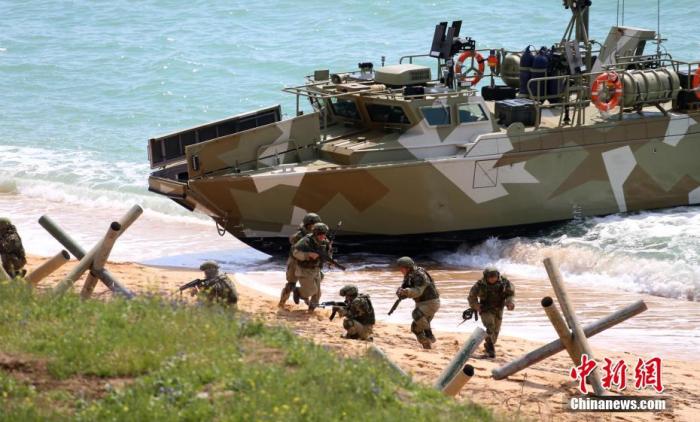 China News Service, December 24. According to a report by Peninsula Chinese website, in the context of the escalation of the situation and mutual accusations between Russia and Ukraine, the two countries have carried out military exercises and training respectively. This was triggered by the tension between the two countries. The crisis has also led to tensions between Russia and Western countries.

On April 22, the Russian Ministry of Defense announced that the Russian military was holding a large-scale cross-service exercise in the Crimea region.

However, these military exercises and trainings were carried out in an atmosphere of cautious optimism. Prior to this, Russia confirmed on the 22nd that it was about to start negotiations on security guarantees with its opponents. In addition, Ukrainian President Zelensky also expressed interest in working with Russia. President Putin held a meeting.

Ukraine conducted military exercises using US-made weapons in the eastern part of the country, and used the US Javelin anti-tank missile for the first time during the exercise.

Oleksi Danilov, secretary of the Ukrainian National Security and Defense Council, said that more than 200,000 Russian soldiers are deployed near the borders of Ukraine.

He also added that the situation is under control and monitoring. He also emphasized that the armed forces must be prepared, even though Kiev does not like military options.

At the same time, Andrei Yermak, Director of the Office of the President of Ukraine, stated that Ukraine had put forward ten points to its friends to resolve the conflict in the Donbass region, but he did not elaborate on the content of these points.

The picture shows Russian President Putin and US President Biden shaking hands before the meeting.

Russian Deputy Foreign Minister Ryabkov stated that Russia has submitted to the US a proposal on the timing of launching security guarantee negotiations and is waiting for a response from the US side.

Ryabukov added that the United States attempts to use dialogue as a cover to continue to help Ukraine’s military development, which will cause the situation in the region to deteriorate.

Just as the speech of the two sides changed from a quarrel to a dialogue, the Russian paratroopers held a large-scale exercise in Crimea on the 23rd.

The Russian Ministry of Defense said that the biochemical defense forces also participated in the exercise, simulating scenarios that protect the armed forces from drone attacks and resist enemy attacks.

The Russian Black Sea Fleet Command also stated that the Sukhoi-27 and Sukhoi-34 fighters and bombers under the Air Force-Space Force have conducted exercises in the Black Sea to simulate interception and escort of foreign warships across Russia’s international borders.

The day before Russia and Ukraine held military exercises in the border area, Russia announced that it would start negotiations with its opponents on security issues.

Russian Foreign Minister Lavrov said in a speech on the "Russia Today" channel on the 22nd that Russia supports negotiations within the framework of three platforms: NATO, Washington, and the Organization for Security and Cooperation in Europe.

He also pointed out that negotiations on security guarantees will begin early next year.

U.S. Secretary of State Anthony Brinken stated that if Russia decides to "invade" Ukraine, it will face "serious consequences."

He also added that President Biden prefers diplomacy when dealing with Moscow, if it also insists on this method.

In addition, U.S. Assistant Secretary of State Karen Donfried said that the date for bilateral meetings will be determined with Russia, and most likely it will be in January next year.

She also added that the United States has seen Russia's proposal and is ready to conduct diplomatic discussions with it through various channels.

Between the positions of Russia and the United States, the Ukrainian President expressed his intention to hold a meeting with the Russian President to advance the peace process in the Donbass region.

However, Zelensky did not conceal his disappointment at NATO’s unwillingness to speed up Kiev’s joining the alliance.

At the same time as these statements appeared, the parties to the conflict between Russia and NATO countries competing for influence in the contact area were still warning each other, while maintaining the options of diplomacy and dialogue.

It is reported that the United States warned Russia about the consequences of any intervention in Ukraine. The background is the military deployment of Russian troops near the Ukrainian border, and Russia has promised to give a severe military response to any "hostile" measures taken by Ukraine.

Western countries accuse Russia of gathering more than 100,000 soldiers near its eastern border with Ukraine, and of "invasion".

Russia denies any plans to "invade" Ukraine, and requires the United States and NATO to provide binding security guarantees, and requires NATO to stop its eastward expansion.