On December 26, 1991, the USSR was officially dissolved, the end point of the dislocation of communist regimes in Eastern Europe and part of Central Asia. On the occasion of this thirtieth ... 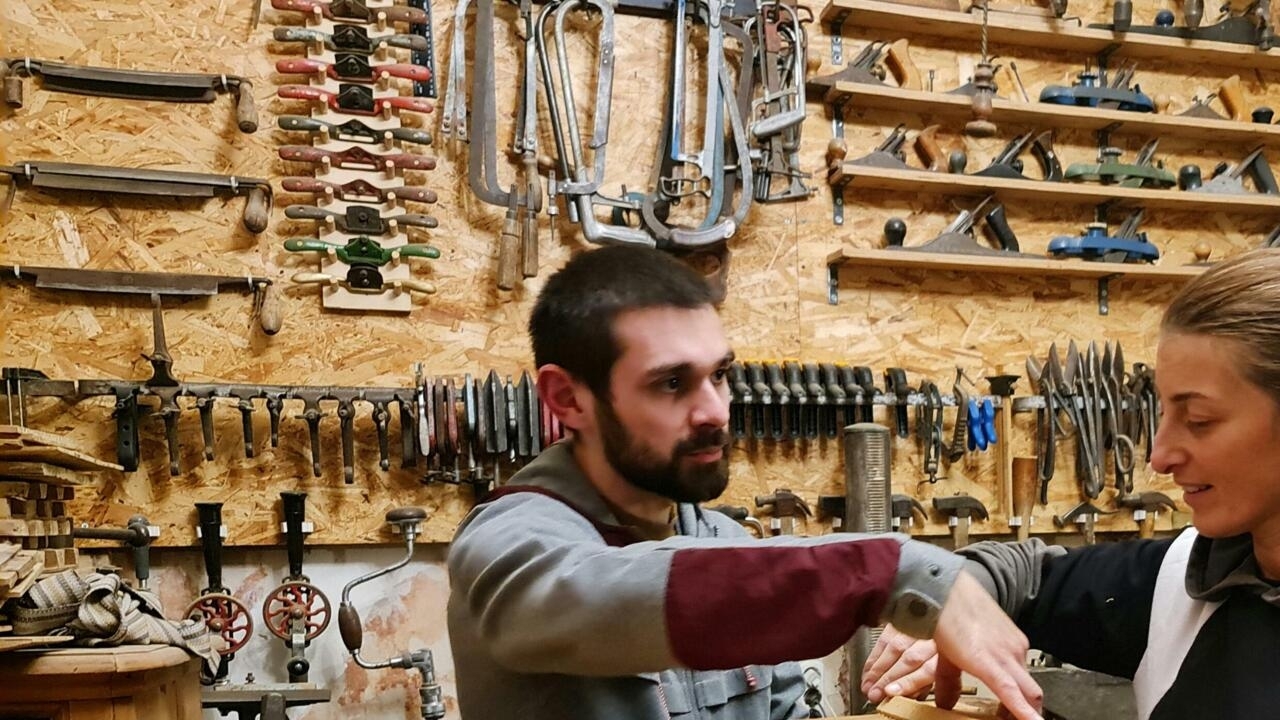 Dato Chaguelichvili in his studio.

On December 26, 1991, the USSR was officially dissolved, the end point of the dislocation of communist regimes in Eastern Europe and part of Central Asia.

On the occasion of this thirtieth anniversary, RFI offers you a series of portraits of young people who grew up in the post-Soviet space.

What are their aspirations?

What do they keep from the heritage of this period?

Direction Georgia where Dato Chaguelichvili was born in 1990 into a family in love with antiques.

From our correspondent in Tbilisi,

The studio of Dato Chaguelichvili, a 31-year-old antique furniture restorer, is in itself a curiosity. Located in a building in an old quarter of Tbilisi, it is lit by a glass chandelier, the ceiling is decorated with moldings, the instruments are neatly stored on the walls, like in a museum. He swears only by his planes, wood chisels, chignoles, saws and other measuring instruments. He loves them and can tell the story of each one, its origin, often German or English, and explain its shapes, handles, sharp parts. His favorite tool? The Stanley n ° 4 plane whose "

shape is perfect, very pleasant to handle, and which allows me to save a lot of time

Truth be told, this workshop looks like a cabinet of curiosities in Georgia.

Although attached to its traditions, the small mountain republic of the Caucasus has lost everything of its craftsmanship and its know-how.

The USSR swore by productivism.

Quantity rather than quality.

Today, thirty years after the fall of the USSR, craftsmen's workshops like that of Dato, there is hardly any other in this country which has passed directly from Soviet mismanagement to anarchic capitalism.

The discovery of a vocation

Immediately after the fall of the USSR, my grandparents and my parents started buying antiques. They loved it. And a lot of Georgians were selling their furniture, their trinkets, their heirlooms because times were very hard after independence here. This passion for old and beautiful things made my maternal grandmother's house a real museum. That's how my parents decided to open an antique store twenty years ago,

This is also how he discovered his vocation. “

My grandmother always had chairs or tables to fix. But she was never satisfied with the result and her treasures came back to her months late. This is how I got the idea of ​​becoming an antique furniture restorer myself at the age of 14, starting by refurbishing a sort of small sofa and two Thonet chairs that she was kind enough to entrust to me

” , remembers the grandson. And here is the teenager in search of information to restore the precious antiques.

There were quite a few guys doing this job in Tbilisi, but either they were incompetent or they didn't have time for me.

I then went to the Tbilisi flea market where I found some old magazines and books in English devoted to the restoration of old furniture.

There was almost nothing in Georgian or Russian.

Later, when we bought a computer, I was able to go Google and find lots of information… in English.

That's why I learned English,

”he confides in Shakespeare's language, losing us with the vocabulary of woodworking techniques and the multiple instruments that populate his charming workshop.

On the fringes of the USSR

For Dato, the USSR, which he did not know and whose family did not suffer as much as so many others, rhymes first with "

constant fear of doing something, to do wrong, to be judged on his personal choices

In Georgia it was a little different. We lived a bit on the fringes, a bit more freely than in the other Soviet republics. My family has thus been able to give free rein to its passion for culture and beautiful things a little more than others

Today he says he is animated on a daily basis by the happiness of having to restore pieces of history, heritage.

My job is to restore and restore the beauty of objects to which others, decades ago, devoted all their energy to make life more beautiful, more pleasant.

I dreamed of having this workshop, and every morning when I open the door, I tell myself that I live in a country and a time where I can enter my dream, walk in my dream as they say

Friends, then word of mouth, led him to teach his "

" in individual lessons, especially to women.