It's been three years since the statuesque Tracy Anderson, former professional dancer and personal trainer of some of the most desired stars on the planet, decided to open in Madrid ... 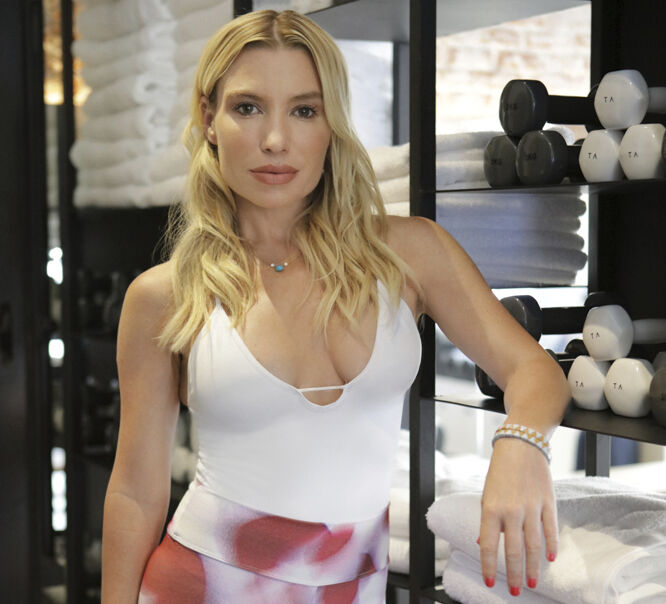 Three years ago, the statuesque Tracy Anderson, former professional dancer and personal trainer of some of the most desired stars on the planet, decided to open in Madrid the only 'branch' outside the United States, so far, of her

(He had two in Los Angeles, two in New York, and two in The Hamptons, Long Island).

For his Madrid landing, he chose a charming local, located at 10 Fernando VI Street, a building owned by LAMARCA, the company founded by the Venezuelan Magali Capriles in close collaboration with her two sisters, Mischka and Magali, and which has transformed the Justice district into the

Its opening generated an unusual expectation because with it the successful method with which Anderson sculpts the bodies of an impressive list of pupils, including

arrived in the capital

. A demanding but very effective training system, with which, among many other things, she manages to

-such as- and which has found in the model

one of her most enthusiastic ambassadors in Spain.

But let's go in parts. Who is Tracy Anderson? Born in Noblesville (Indiana, United States) in 1975, this blonde with a steel body and 1.52 m tall who had dreamed of becoming

since she was little,

gave her life a turn that, years later, would make her not just one of the most sought-after personal trainers in the world, but, perhaps more commendable, one of the most

businesswomen in the international fitness industry.

They say that, after gaining about 20 kilos during his first year of training to join the famous dance company in New York, Anderson decided to redirect his career towards fitness, specifically, towards exercise programs focused on

This is how the Tracy Anderson Method was born, "a revolutionary system, the result of more than 20 years of research and field work that, regardless of the genetics of each person, helps to achieve a

", explain the responsible for the center in Madrid.

Despite also having men among his students - among them, nothing more and nothing less than the very 'ironman', the wayward Robert Downey Jr -, it is no secret that Anderson devised his system thinking about the female anatomy. "After years of research, self-testing and improvement, Tracy was able to completely transform her own body, shaping a first version of her method that, later, she tested with more than a hundred women who she designed

. After monitoring their progress, he was able to verify that, regardless of their genetic background, racial characteristics or physical constitutions, all of them managed to achieve that prototype of figure they were pursuing."

This study was not only the realization that his method worked, but also marked the birth of the

of gyms, DVDs, energy bars and sportswear that has elevated Anderson to the Olympus of fitness gods.

But there is still more.

that has grown so much due to the restrictions imposed by the coronavirus when, almost 10 years ago, she decided to install a camera in her study room so that more women could have access to your method.

But, what is that long-awaited 'prototype' that promises the most sought-after 'coach' among the stars? Basically that of a dancer. That is to say, a slim and proportionate body, with

. Marked but without too much volume. That is to say, those 'skiny muscles' that are so high today.

The path that must be followed to achieve this ideal, the one that the aforementioned

and many other well-known faces already travel whose identities, by discretion, they do not want to reveal in the center, begins, inevitably, by paying the

40 euros that each session costs

From that moment on, you have to sweat as you probably have never sweated in your life because the Tracy Anderson Method is practiced at

40 degrees of temperature and with a humidity of 70%

What need is there to be subjected to such physically demanding environmental conditions?

Quite a bit because, that way, the muscles are more 'malleable' during exercise.

The 14, normally, students who enter the colorful room of the center know that, during the hour ahead, they will not have a moment of truce.

Trained by stylized -and super attractive, it must be said-

former dancers with bodies of steel and an iron hand

undergo exhausting (but hilarious and without impact) sessions -which change every 10 days of repertoire of exercises- in which cardio work is combined with strength work in a masterful way, using

as additional material to own body weight.

All this, enlivened with music of the kind that puts the batteries from the minute.

All this intense and super effective work translates into

But, above all, in

a powerful, firm and with more volume buttocks

You can not ask for more.

'Bootcamps' From waiter to programmer: the 'military' trainings to change professions

SpainInsubmission in the most dangerous module of the Villena prison: challenges, blows and buckets with bleach

Stories She dies after being mistaken by the Summa for a terminally ill person and not sending her help on time: 'We have a lot of calls, okay?'