"Be in the spotlight": how Ukraine scares the West with a new world war in the event of an "invasion" of Russia

The invasion of Ukraine will lead to a new world war. Ukrainian Minister for Veterans Affairs Yulia Laputina stated this in an interview with British media. She explained that for the sake of the security of continental Europe, attention should be paid to the situation in her country, since in the event of a "Russian invasion" the war would spread beyond Ukraine. Experts note that with such rhetoric Kiev wants to prevent the possible start of a dialogue between the United States and the Russian Federation on security in Europe. 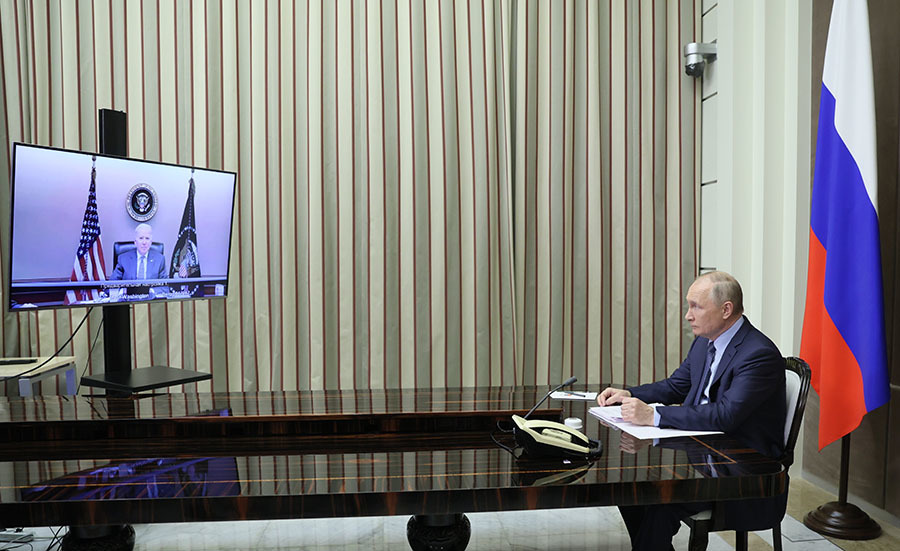 Aggression against Ukraine could lead to a new world war.

This was stated by the Ukrainian Minister for Veterans Affairs Yulia Laputina in an interview with the British TV channel Sky News.

Laputina answered in the affirmative when asked whether an invasion of Ukrainian territory could provoke a new global armed conflict.

Because from a geopolitical point of view, such a development of events seems possible.

Therefore ... the Ukrainian issue should be given attention for reasons of the security of the continent.

This - the spread of war in the event of a Russian invasion of Ukraine - will be not just Ukrainian, but a much larger event, ”Sky News quoted Laputina as saying.

The Ukrainian minister also accused Russia of preparing some kind of "incident" in the Balkans, without explaining what it was.

“If Russia invades, then we shouldn't forget about the Balkans.

The Russians are now busy in Serbia trying to provoke an incident in the Balkans, ”Laputina said.

Recall that since the beginning of November, Western media and politicians have been claiming that Russia allegedly has plans to invade Ukraine.

This information is actively disseminated mainly by American and Western European newspapers and TV channels.

In their materials, they rely on anonymous sources in government circles in the US or the EU, who are allegedly familiar with the data of American intelligence on this issue.

The date of the alleged invasion is January or February 2022.

At the same time, the Financial Times previously reported that not all European countries believed in the possibility of such a scenario.

However, the newspaper claimed, Washington managed to convince its European allies that Moscow was allegedly hatching such plans, after prolonged diplomatic influence and the transfer of some intelligence.

Russia has repeatedly stated that such information does not correspond to reality.

The press secretary of the Russian President Dmitry Peskov called such reports artificial whipping up hysteria.

Against the background of this information campaign, negotiations between Russian President Vladimir Putin and American leader Joe Biden took place.

After that, the White House announced that Biden also announced his readiness to impose tough sanctions against Russia in the event of "aggression" against the Ukrainian side.

This information was confirmed by Dmitry Peskov.

He said that the US President spoke about the financial isolation of Moscow in the event of an alleged "invasion" of Russia in Ukraine.

"Biden said that if there is this ephemeral invasion of Ukraine - apparently, the Americans themselves have already believed that this is not information stuffing, but the true truth - then Russia will be financially isolated, and so on and so forth." - said the representative of the Kremlin.

In turn, Russian President Vladimir Putin said earlier that questions about the plans of Russian aggression against Ukraine are provocative, and Moscow is pursuing a peaceful foreign policy.

“Russia is pursuing a peaceful foreign policy, but it has the right to ensure its security,” the Russian leader noted.

Putin added that Moscow continues to discuss this situation with all partners, including the United States.

At the same time, the question of Ukraine's possible entry into NATO worries the Russian side, the president stressed.

“We cannot but be concerned about the prospect of Ukraine's possible admission to NATO, because this will undoubtedly be followed by the deployment of appropriate military contingents, bases and weapons that threaten us,” Vladimir Putin said.

According to the Russian president, despite Moscow's expressions of concern over the past decades, NATO's military infrastructure continued to move closer to Russia's borders.

“And now we see missile defense systems in Poland and Romania.

We have every reason to believe that the same will happen if Ukraine is admitted to NATO, but this time on Ukrainian territory.

How can we not think about it, it would be just a criminal inaction on our part: it is weak to watch what is happening there, "Putin stressed.

Statements such as those made by Ukrainian Minister Laputina suggest that Kiev fears a loss of interest from the West in the topic of the alleged Russian invasion, Vladimir Olenchenko, senior researcher at the Center for European Studies at the IMEMO RAS, said in a conversation with RT.

In addition, the Ukrainian side is clearly not happy with the news that the Biden administration took into account Moscow's objections to the lack of documented security guarantees in Europe that would take into account the interests of the Russian Federation, the political scientist added.

“Many participants in this information campaign about

"Invasion" causes discontent that the US and the Russian Federation can start a dialogue on such guarantees.

Their appearance will devalue the political activities of the Baltic countries, Poland and Ukraine in relation to Russia, ”the expert explained.

Particularly interesting in this context is Laputina's mention of the Balkans and Serbia, which had not previously figured in the information campaign on a possible "invasion" of Ukraine, Olenchenko added.

“This statement demonstrates that Kiev has no political independence at all.

Ukrainian politicians issue such conclusions on the basis of what partners tell them, who are worried that a number of Balkan countries are traditionally focused on Russia, "the interlocutor of RT explained.

The Ukrainian authorities continue to parasitize on the status of a victim of aggression declared by Kiev, while ignoring the solution of the country's real internal problems, Volodymyr Olenchenko noted.

“Instead of doing business, they have recently been trying to attract attention to themselves, to get money under the pretext that Russia allegedly wants to commit aggression against them.

Ukraine wants to be in the spotlight.

Ukrainian leaders are ready to destroy their population in order to satisfy their political ambitions, ”the expert emphasized.

In turn, the head of the Bureau of Military-Political Analysis, Alexander Mikhailov, noted in a commentary to RT that Kiev wants to support the general information background about the allegedly impending "invasion", which is beginning to gradually erode in the Western media.

At the same time, the fact that such a statement is made by the Minister for Veterans Affairs of Ukraine indicates the absence of any agreement on this issue in Kiev, the political scientist added.

“Another minister expressing his unprepared opinion on the foreign policy situation is already a Ukrainian tradition.

Advisers to the president, ministers from the government - everyone has their own decisions about what to do with Crimea or Donbass.

There is nothing surprising in this.

Moreover, another such thesis is a good reason to turn the information agenda in its direction and not to fulfill the Minsk agreements, ”explained Alexander Mikhailov.

Such statements will be made public before a new meeting of the presidents of Russia and the United States, at which a substantive discussion on security guarantees in Europe can be expected, the expert said.

“The hysteria will continue until the face-to-face meeting between Putin and Biden, which may take place in late January or early February.

Until then, the pumping of the information background will continue, which is quite common.

Until that time, we will still see a string of provocations from Ukraine.

At the same time, after the meeting of the leaders of the Russian Federation and the United States, it is quite possible that some kind of detente will come, "the interlocutor of RT concluded.