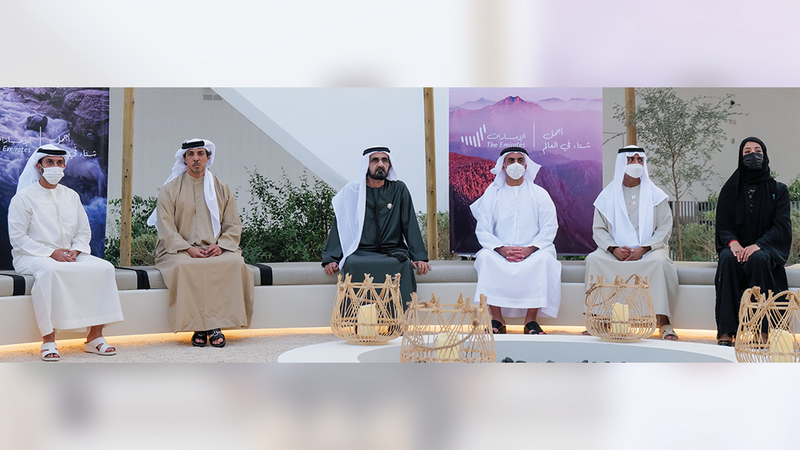 His Highness Sheikh Mohammed bin Rashid Al Maktoum, in his account on Twitter, said: "Today we launched the campaign (the most beautiful winter in the world) for the second year, with the cooperation of the federal authorities and local tourism departments as one team, to consolidate the UAE as a single tourist destination, as confirmed by the fifty principles. ».

His Highness stressed that: "The campaign for the most beautiful winter in the world is primarily an internal goal, with a family goal, for our families to gather in our beautiful homeland, for families from Dubai and Abu Dhabi to enjoy the beauty of Ras Al Khaimah and Fujairah, and for families from the rest of the Emirates to spend the most beautiful times in Abu Dhabi and Dubai's international tourist facilities. We want everyone to enjoy the Emirates.”

His Highness Sheikh Mohammed bin Rashid Al Maktoum said: "The UAE is the fastest growing tourist destination in the world.

And in the seven emirates, the beauty of history, geography, nature, architecture, society, place and man.”

The event was also attended by Minister of Cabinet Affairs Muhammad Abdullah Al Gergawi, Minister of State for Entrepreneurship and Small and Medium Enterprises Dr. Ahmed Belhoul Al Falasi, in addition to a number of ministers and officials from various tourism authorities and federal entities in the country.

His Highness called on everyone from inside and outside the UAE to participate in the campaign of the most beautiful winter in the world and interact with it on their social platforms, saying: "The country's archaeological sites, cultural stations, heritage monuments and natural reserves provide an integrated human experience."

His Highness Sheikh Mohammed bin Rashid Al Maktoum concluded: “The cooperation of the authorities responsible for the tourism sector at the local and federal levels has resulted in a tourism sector that is among the fastest recovering and the most attractive in the world. We have a unified tourist identity and we are working as one team to consolidate the UAE’s tourism position globally.”

The "The Most Beautiful Winter in the World" campaign, implemented by the Media Office of the UAE Government in cooperation with the Ministry of Economy and various bodies concerned with tourism, culture and heritage, will continue from December 15, 2021 until the end of January 2022, to be the largest campaign of its kind highlighting various domestic tourism options in various parts of the world. The Emirates, and introduces tourists and visitors from all over the world to the mild winter of the Emirates, and all the elements of attraction that the state provides to its visitors, individuals, families and tourist groups, for a unique vacation, during which they can enjoy the warm and refreshing climate in the country in this season, and visit the most important landmarks Emirates recreational, cultural and natural, and the practice of the most enjoyable outdoor activities.

This year’s “The Most Beautiful Winter in the World” campaign is an open invitation to all residents and visitors of the country to capture their most beautiful experiences, adventures and enjoyable moments in various parts of the Emirates and in all its activities and share them through digital platforms, social media and instant messaging, and to publish inspiring content from photos and videos that highlight the most beautiful in the world. The state of tourism and entertainment experiences, cultural events and enjoyable adventures in a safe global tourist environment confirmed by the UAE solutions in first place in the Arab world and second globally in the list of the most flexible countries in dealing and responding to the “Covid-19” pandemic, within the “Resilience to Dealing with Epidemics 2021” index, issued by the Foundation "Consumer Choice".

The campaign also opens the door for influencers and celebrities from the country, the Arab region and the world to join the campaign and introduce from their platforms, which are followed by millions, the most prominent tourist attractions that characterize the UAE.

This year’s edition of the World’s Most Beautiful Winter campaign celebrates in particular the human element, which constitutes the first, most prominent and most important factor in establishing the position of any country as a desired and desired global tourist destination, which is embodied in the levels of safety in the country, which is among the highest in the world, as well as the feelings of brotherhood and welcome And the values ​​of tolerance, inclusion, respect for pluralism and diversity felt by everyone who visits the country, starting from the airports and land and sea ports, and ending with the interaction of the ordinary person on the street, and the good reception that makes every tourist feel reassured and happy, being welcomed wherever he goes and anywhere in the country.

The “The Most Beautiful Winter in the World” campaign highlights the most beautiful things that the UAE offers in all its regions to tourists from the country’s residents and visitors, as a continuation of the first edition of the campaign, which last year constituted the first unified campaign for internal tourism in the UAE.

The campaign “The Most Beautiful Winter in the World” expands this year to include two levels, locally and globally, and presents the most important tourist and entertainment destinations in the country, and introduces the local and international audience to its nature, culture, heritage, history, architecture and landmarks, highlighting the distinctiveness of the tourism experience in each of the seven emirates of the country, and providing a close look at the most important cultural activities And recreational and sporting events in each region of the country. The campaign is also accompanied by the provision of many exclusive promotions for the campaign by tourist establishments, hotels, shops and restaurants.

The campaign “The Most Beautiful Winter in the World” unites all tourism and promotional efforts and initiatives in the UAE, in coordination and integration with various institutions and relevant authorities locally and federally, to activate internal tourism throughout the country, as well as external tourism to attract tourists from all over the world, especially from countries experiencing severe winters. The campaign is for all entities and institutions working within the tourism sector in the country to design and present a competitive, distinct and diversified tourism product that meets the various expectations and interests of internal and external tourists.

The campaign also highlights the most important natural, cultural, heritage, historical and urban areas in the country and the various activities that can be practiced, in addition to highlighting the elements of the Emirates that make it an attractive environment for all types of tourism. It highlights the specificity of the tourism experience in each of the seven emirates of the country, and promotes its various and unique advantages and components, and highlights the most important natural, heritage and historical landmarks, modern and modern edifices that it enjoys, and recreational events and cultural and community activities that it provides under the umbrella of the unified tourism identity.

The campaign focuses on the human aspect and the hospitable nature of the UAE society, which is characterized by generosity and tolerance, so that the visitor, from anywhere in the world, feels at home. The campaign also encourages people in the UAE to actively participate in it from various groups;

The first version in numbers

The first edition last year constituted the first unified campaign for internal tourism at the level of the UAE, and it lasted 45 days, in which all tourism authorities in the country participated, and in coordination of the Ministry of Economy, and targeted various segments of society from citizens, residents and visitors, and encouraged internal tourism in the regions and emirates of the country as a whole. as one destination. Last year, the "The Most Beautiful Winter in the World" campaign achieved record success on various levels. The campaign has generated more than 500 million views from around the world for its diverse campaign content. Last year, the campaign recorded 950,000 tourists within one month, and achieved one billion dirhams in revenues within one month. The campaign “The Most Beautiful Winter in the World” contributed and this year also contributes to supporting the vital tourism sector to consolidate the pillars of a diversified and sustainable economy, and to enhance the sector’s position among the most resilient globally, the fastest recovering and least affected by the repercussions of the “Covid-19” pandemic, as the number of domestic tourists increased to 8.9 million downloads from the beginning of 2021 until the end of October, compared to 6.2 million for the same period last year.

The UAE, especially in the warm and mild winter, has many distinct attractions that make it a unique and enjoyable tourist, entertainment, cultural, natural and human experience.

The winter, which extends from December to February, is characterized by mild spring weather, which is a dream and a haven for tourists who experience very cold winters, and are looking for a tourist destination equipped with the latest services and all tourist options welcome everyone.

The tourism sector in the UAE in numbers

During the same comparison period, the number of hotel nights spent by guests amounted to about 35 million nights, a growth of 30%, and the average guest stay increased to 4.1 nights, with a growth of 12.5%. This was accompanied by a 31% growth in hotel establishments’ revenues, reaching 11.3 billion dirhams.

The share of domestic tourism reached more than 30% of the total guests of hotel establishments.

The global data website Statista expects the UAE to attract more than 31 million tourists annually by 2025, and the same source expects the travel and tourism sector to contribute 280.6 billion dirhams to the UAE's GDP by 2028.

• «The most beautiful winter campaign in the world aims primarily internally, and for our families to gather in our beautiful homeland».

• "The UAE is the fastest tourist recovery in the world... We have a unified tourist identity and we work as a team."

• “In the seven Emirates, the beauty of history, geography, nature, urbanism, society, place and man.”

• The campaign “The Most Beautiful Winter in the World” will run from December 15 until the end of next January.

• The campaign highlights the best that the UAE offers in all its regions to tourists, residents and visitors of the country.