Covid, Israel: flights to the United Kingdom, Denmark and Belgium stop within 72 hours

The Custos of the Holy Land: "The stop of the entrances to foreigners blocks the Christmas of Catholics" 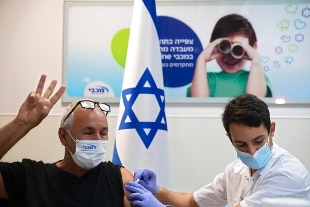 December 12, 2021 The United Kingdom, Belgium and Denmark will be labeled by Israel as "red" countries and placed under a travel ban.

This was announced by the head of public health services, Dr. Sharon Alroy-Preis, during a press conference with the minister of health, Nitzan Horowitz, and the director general of the ministry of health, Nachman Cenere.

Israelis, explains the Jerusalem Post, cannot travel to the red countries unless they obtain special permission and when they return they must remain in quarantine for at least a week, regardless of their immunization status. Currently, around 50 African countries are on the list. The new nations are expected to be added to the group in approximately 72 hours.

According to the Israeli media, a similar decision is also imminent regarding Germany and the Netherlands. Preis noted that of the 55 Omicron cases confirmed so far in Israel, "almost all involve people who have come from abroad or people infected by them."

According to health minister Nitzan Horowitz, Israel is unable to prevent the presence of the Omicron variant in the country, but it can reduce it with a drastic limitation of entrances at Tel Aviv's Ben Gurion airport and an extensive vaccination campaign.

In the morning, in the session of the Council of Ministers, Prime Minister Naftali Bennett also evoked the possibility that particular restrictions are imposed in Israel on those who have not yet been vaccinated, but no decisions have yet been made on the matter.

The freezing of entry into Israel blocks the Christmas of Catholics

"the ban on entry for foreigners to Israel entails cutting all the world's Catholic pilgrims out of the country on the occasion of Christmas".

This is the denunciation of the Custos of the Holy Land, Father Francesco Patton, on the extension until December 22 of the entry ban established by the Israeli government in the face of the Omicron variant.