Bad weather and winds of up to twenty meters per second. This is how the Coast Guard describes the night and Wednesday morning when the firefighting work by Almirante Storni now begins on day five. And the fire does not give way to the water cannons - instead there is a risk that it will get worse. - It is tiring for everyone involved, it takes effort, says Mattias Lindholm communicator at the Coast Guard. 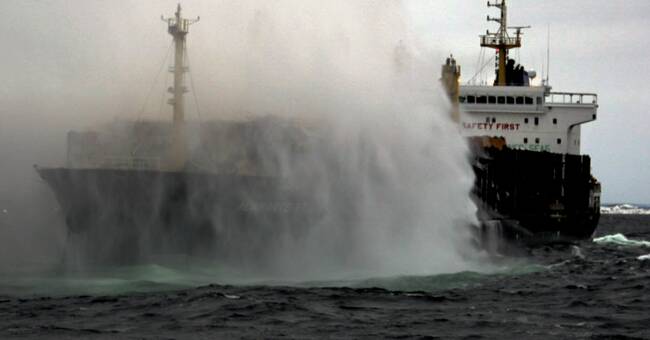 So far, boats and equipment are holding, but the Coast Guard warns that such a long effort in this prevailing weather is seriously consuming resources.

The water from the sea and not least the water that the cannons spray out freezes to ice, which leads to heavy icing of both ships and water cannons.

So far we have full function with in such difficult conditions it wears out, says Matiias Lindholm communicator at the Coast Guard.

According to him, there is a risk that the fire could spread.

- There is a heat dissipation in the load.

This has not been the case before.

Ships can be moved

They are now continuously reviewing the possibility of moving the ship to calmer waters or to the quay.

It would provide better opportunities to access the hearth and be able to finish the job.

- We have not overcome the fire, as it is now we can not access with direct effect, so we do not reach what burns directly with the water jet.

Using helicopters to bomb the ship with water is also not relevant at the moment due to the weather, the Coast Guard announces.

They can not go low enough and this in turn means that most of the water blows away on the way down to the ship.

Mattias Lindholm can not give an exact answer as to how long they can last, but in terms of staff, they are equipped for the effort.

- We use staff from different parts of the country and we have staff available who undergo regular crew changes.

But it is clear, we can not go on for any length of time, says Mattias Lindholm.

Norway has responded and is expected to strengthen during the evening with K / V Bergen.