The independence movement only knows how to point out those it considers dissidents. The home of the rector of the Autonomous University of Barcelona (UAB), Francisco Javier Lafuente, has ... 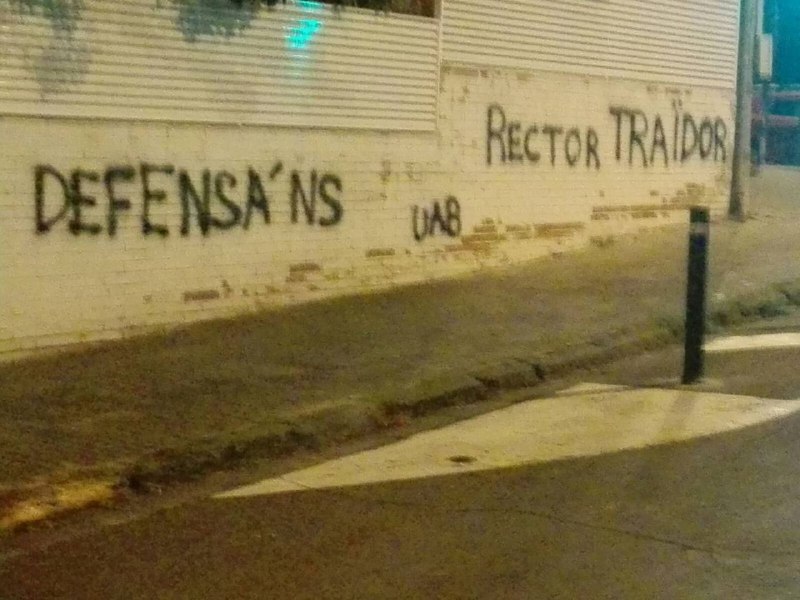 The independence movement only knows how to point out those it considers dissidents.

The home of the rector of the Autonomous University of Barcelona (UAB), Francisco Javier Lafuente, has dawned with graffiti made by the Acció Per la Independència entity in which he was ugly that allowed an act of the entity S'ha on November 25 He ended up on campus and allowed him to access the entrance of the Mossos d'Esquadra who charged against students summoned to protest this event.

In a statement, Acció Per la Indepndència claims that "the Spanish group S'ha Acabat, with the explicit support of parties and entities of the same ideology, PP, Cs, VOX and SCC, organized an act of provocation" at the UAB that had his answer in the protest of students summoned by entities of the pro-independence left.

"Unfortunately not only was this infamous act of the worst Spanishism allowed in the university, but the rector of the same, Francisco Javier Lafuente Sancho, also authorized the entry of the Mossos d'Esquadra, who ended up charging with violence against the concentrated students while on the other side of the cordon it was called for the outlawing of pro-independence youth organizations, La Forja and Arran, "says the sovereign entity.

For this reason, "as a first response" they came to paint the rector's house "as a necessary collaborator, to allow both the performance of the act of Spanishism and the entry of the Mossos, knowing that they only know how to act with blows. For these reasons, we demand the immediate resignation ". Acció per la Independència considers that this "symbolic action, they are still just a few graffiti in his house" show that both the rector and the organizers of S'ha Acabat that ended "the permissiveness of the outrages and provocations of the most stale Spanishism, as well as collaborationism, it will not be without consequences "and they added that" the painting is only an example and a warning of our capacity ".

Given this statement, S'ha Acabat sympathizes with the rector and his family by condemning "emphatically and without palliative acts of vandalism that he has suffered in his private home, which are especially serious when being vindicated by the violent separatist group Acció Per la Independence as "an example of notice" of its "capacity for action" ". They also ask "all political parties with representation in the Parliament of Catalonia, the Minister of Universities and the Minister of Universities an explicit condemnation of the events caused by the aforementioned group."

"We remind Mr. Lafuente that allowing violent attitudes of independence in the Autonomous University of Barcelona or anywhere else ends up having serious consequences over time, since anti-system separatism is a political movement of a violent and vengeful nature," they highlight.

Catalonia Smoke boats and a rally to welcome S'ha Acabat!

in an act at the Autonomous University of Barcelona