Bad weather, new deterioration in Italy: snow in Milan and Turin. Mose is active in Venice

Pouring rains will hit the plains of Veneto and Friuli Venezia Giulia and then also Tuscany, Lazio and Sardinia, Campania only at the end of the day 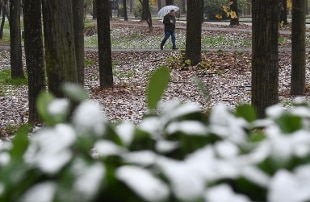 08 December 2021 A new disturbance is in action on Italy; fed by cold air and driven by strong southern winds, it will make it snow up to the plains in the north. Experts warn that in the next few hours widespread snowfalls will affect the plains of Piedmont and Lombardy with accumulations of up to 10-15cm at the end of the event. Widespread and abundant snow throughout the Alps where 50-60 cm could be deposited over 1200 meters.

And not only will the snow make the news, but also the rain. Pouring rains will hit the plains of Veneto and Friuli Venezia Giulia and then also Tuscany, Lazio and Sardinia, Campania only at the end of the day. Tomorrow the disturbance will move towards the Center-South, especially on the Tyrrhenian side and again with widespread showers and some storms. In the north, after the last morning instability on the Triveneto, the weather will definitely improve, but it will be quite cold even during the day (2-3 C in Milan and Turin).

The snow on the Apennines will drop to below 900 meters, resulting in abundance. The weather will only partially worsen in the North, especially in lower Lombardy and Emilia with snowfalls at very low altitudes. Finally, over the weekend a cyclonic vortex will position itself on Central Italy causing a strong wave of bad weather on the central and southern regions, while in the North the high pressure will advance.

First flakes of snow this morning in Milan. As had been anticipated in recent days, the 'storm of the Immaculate Conception' has arrived in Northern Italy. In the city until around 9.30 the snow was still mixed with rain and did not attack the ground and therefore at the moment there were no traffic problems. AND' however, heavy snowfall is expected and 2 to 10 centimeters of snow are expected.

The Municipality has activated the Emergency Operations Center starting from 6 this morning and the interventions of salt spreading, both mechanized and manual, have been planned on the roads and in the critical points for mobility, including pedestrians, such as the surface ATM and underground, access to schools, health services, areas of uncovered markets. MM has already alerted the caretakers of public housing and businesses to provide for the salting of the ramps of the boxes and the sidewalks facing them. School managers were also notified for the salting of the accesses to school facilities. As reported by the firefighters, it snows more

abundantly in the northern area of ​​Lombardy.

Snow in Turin, yellow alert in the plains

Turin is whitened by the snow, which has fallen since dawn, and there is a yellow alert for snowfalls in the south of Piedmont and on all the plains. The most significant accumulations at low altitude - warns the weather service of Arpa (Regional Agency for Environmental Protection) - will concern Monferrato, Asti and Alessandria, where 15-20 cm of snow can be overcome, on the other sectors of plain between 5 and 15. In Turin city 5 cm are expected. The international crossing of Colle della Maddalena, between Italy and France, is closed since 10 pm yesterday.

Amiat activated the salt spreaders starting from midnight to slow down the deposit of snow on the ground and the operations went on all night. The snow plows are ready to intervene in the event of snow deposits on the hills and - only if necessary - even on the plains.

Snow in Trentino, up to 30 centimeters, even in hilly areas

. Snow day in Trentino with a ban on the circulation of heavy vehicles in Val di Non and Valsugana. Meteo Trentino foresees widespread rainfall of moderate intensity and in some cases strong and snowy up to the Adige valley. The snow will also reach hilly altitudes with accumulations from 15 to 30 centimeters and more consistent, up to half a meter, at high altitude. Tomorrow more snow

and clearings from the afternoon. Sunny Saturday and Sunday.

Mose active in all inlets

The Mose is active in all inlets in Venice.

The expected value in the sea at 11.20, as reported in Centro maree by the Municipality of Venice, will be 105 centimeters.

The level in Venice could reach a maximum of 80 centimeters around noon.

At this level, less than 1% of the city soil will be affected by the tide.

also expected in the night with 120cm around 3. Mose expected activation starting at 21.30.

# Update @ ICPSMVenezia informs that a maximum of 105 cm is expected at 12.15 on Wednesday 8 December