Third attempt to make an interchange in Conde de Casal: 30 years, two deserted competitions and 2025 as a new release date

The Conde de Casal transport interchange, next to the Madrid square of the same name, will be a reality in 2025 if there are no new setbacks. 30 years have passed ... 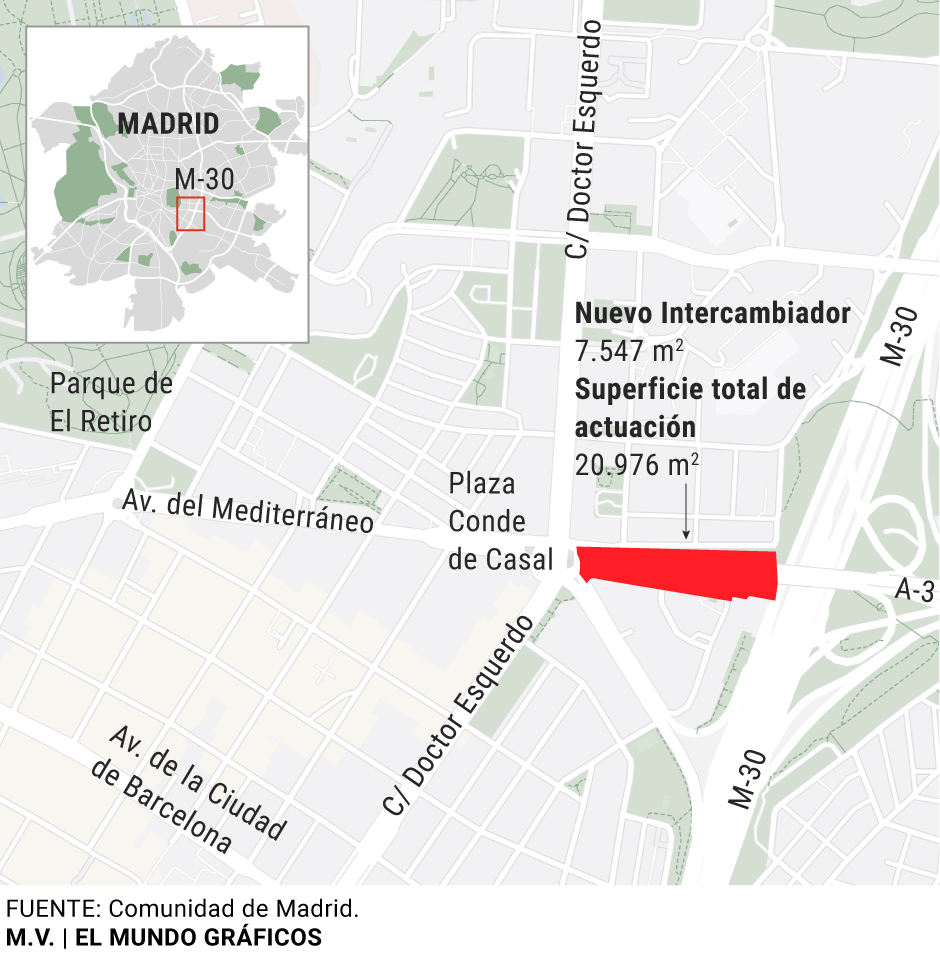 The Conde de Casal transport interchange, next to the Madrid square of the same name,

if there are no new setbacks. 30 years have passed since its first design and two unsuccessful attempts to carry it out in which the tender for the award of the works was void, but the current forecast of the regional government is that the works can finally begin in the last quarter of 2023 with an estimated duration of 18 months.

Once the new infrastructure is operational, which will have a plant at street level for the docks and a higher one, it will allow ordering the transit of

-eight urban and 18 that connect municipalities of the A-3- without traffic lights, With what you will save 10% the usual time of your tours. The actions will include the extension of the underpass for vehicles from the Avenida del Mediterráneo to the connection with the M-30 and its covering with a slab, which will reduce the number of lanes above ground from 10 to six and 40% the noise pollution of the zone.

The data is included in the project report prepared by the Madrid Regional Council for Transport, which is currently in the environmental impact assessment phase. The new facilities will have an influx of around

that will have a commercial area, another recreational area with food and drink establishments and offices, as well as taxi service, bicycles and electric scooters and gardens on the deck.

The calculation that has been made is that the invoice reaches

and the execution of the works will coincide with the expansion of Line 11 between Plaza Elíptica and Conde Casal, on Line 6, scheduled since November of the year that It comes until the end of 2026. In fact, the extension of the suburban route below the already existing stop is what will prevent the interchange from being built underground, as was originally planned, so it will be located on it.

In the two previous attempts to organize traffic in the Conde de Casal area, carried out

, the works plan also included the construction of a 2,000-space car park to serve the long-distance bus station of the Auto-Res company (now part of the Avanza group), which in 2007 ended up moving to Méndez Álvaro after 40 years in the Adelfas neighborhood, Retiro district. In their place there are now two residential towers and a public parking for 245 vehicles, so in this new phase of relaunching the project it is estimated that the parking needs in the surroundings are covered.

In addition to this interchange, the Ministry of Transport plans the construction of another three in

The latter, which in addition to the neighborhood that gives it its name, will serve the Isabel Zendal Nurse Hospital and the future City of Justice, will be the first of all of them to receive passengers.

The works are scheduled to begin in the first quarter of 2022 and end in early 2023 with a budget of around 33 million.

When it becomes a reality, the new infrastructure in Conde Casal will directly benefit, in addition to Madrid, 21 municipalities located in

through alternative energy systems, essentially solar and aerothermal, while sound-absorbing elements will be installed on the roof to reduce traffic noise.

With an area of ​​7,547 square meters and a maximum height of between six and nine meters, it will also ensure that shadows are not projected on the adjoining homes.