The summit between Biden and Putin has begun: Ukraine is in the foreground

The presidents of Russia and the United States Vladimir Putin and Joe Biden have started bilateral talks, which for the first time are held by videoconference 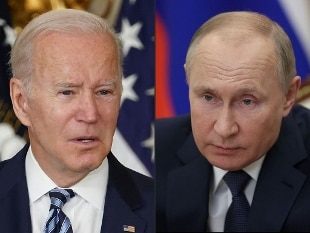 07 December 2021 The virtual summit (via videoconference) between the head of the Kremlin and the American president has just begun: at the center of the debate, tensions over Ukraine. Putin contacted his American counterpart from his Sochi residence. Joe Biden instead will speak from the Situation room: an operations room in the basement of the West Wing of the White House (the so-called West Wing) where the US administration pilots all the most delicate interventions, including military ones - such as the blitz against Osama Bin Laden - This is an off-limits area for the press, so there will be no live photos, images and greetings.

White House spokesperson Jen Psaki stressed that the goal of the virtual summit with Putin "is to communicate diplomatically that it is time for Russia to withdraw its military forces on the border with Ukraine". But "other options are also ready". Moscow denies any bellicose intentions and accuses the West of provocation, particularly with military exercises in the Black Sea, which it sees as part of its sphere of influence.

Moscow: "Russia does not intend to attack anyone"

The Kremlin spokesman, Dmitry Peskov, a few hours before the meeting between the two leaders said: "Russia does not intend to attack anyone. But we have our fears and our red lines."

Attempts at mediation by European leaders

On the day of the Washington-Moscow summit, Biden called 4 European leaders saying he was "ready to sanction Russia in the event of an invasion of Ukraine". Thus the White House after the president's talks with European partners: "The United States coordinated with allies in view of the talks between President Joe Biden and Russian President Vladimir Putin on a package of financial sanctions that would impose economic damage significant and serious to the Russian economy "

The Biden administration is exploring options for the eventual evacuation of American citizens from Ukraine in the event of a Russian military attack: according to CNN accounts, specifying that Washington "is preparing for all scenarios, even if that of an invasion does not seem imminent. "

The sanctions prepared by the US in the event of a Russian attack on Ukraine "could affect the biggest Russian banks and Moscow's ability to convert rubles into dollars and other currencies": this is the warning - reports Ansa - launched by executives Americans to Russia just before the virtual summit between Joe Biden and Vladimir Putin.