Haparanda's municipal councilor Sven Tornberg (C) is now sharply criticizing the media for their reporting regarding the image of Minister of Civil Affairs Ida Karkiainen (S). And he does it on the municipality's own Facebook page. He also urges people to do the same - to stop the train against her. 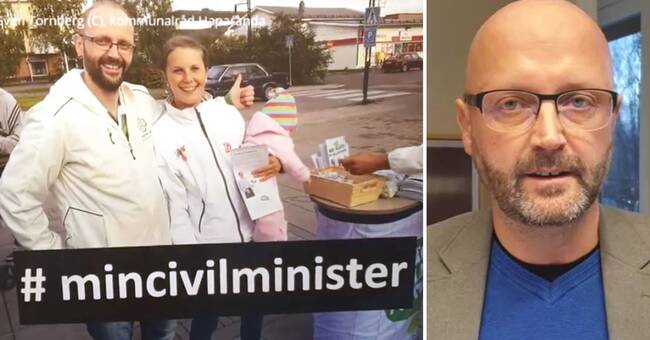 The Social Democrats' new Minister of Civil Affairs Ida Karkiainen from Haparanda has ended up in a real blizzard since a youth photo was published where it looks as if she is making a Hitler salute with outstretched arm in connection with a party.

"An attempt to ironize"

- If it is the case that I have done it, then it is an attempt to ironize about that type of ideology, she told SVT Nyheter Norrbotten on Monday night.

But also information that listening to white power music in her circle of acquaintances, such as Pluton Svea, has led to strong reactions - for and against.

SVT has contacted Ida Karkiainen via her press secretary on Tuesday, but she declined an interview.

But her political opponent in Haparanda, the Center Party member and municipal councilor Sven Tornberg, at the same time urges people to back the Minister of Civil Affairs and he does so on the municipality's Facebook page.

- Ida is my Minister of Civil Affairs.

Do what you do too, he says in a video on the page.

Want to stop the drive

Sven Tornberg can not imagine that Ida Karkiainen "healed" to pay tribute to Nazis during her youth.

He believes that everyone who knows her understands how impossible that would be.

- I want to put an end to this nasty train that goes against her, including on social media.

It is not acceptable to express oneself like that about a human being, never in life.

That is why I have made an exception on the municipality's Facebook page, where we are not really supposed to convey political messages.