Brandenburg massacre: committed by his father for fear of arrest, he falsified the green pass

He had forged his wife's certification and it had been discovered by the woman's employer. The man feared that after his arrest he would lose his children 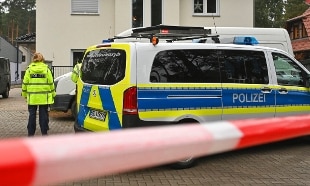 He falsified the anticovid vaccination certificate of his wife and now he feared being imprisoned, and for that reason they were uplifted the children to him and to his mother. This is the motive, he said in a farewell letter found in the house, which pushed the teacher 40 years to kill the whole family in Germany, before taking his own life. Writes the DPA, citing the prosecutor in charge of the investigation. Saturday the bodies of the couple were found and three children in a house of Brandenburg, with stab wounds and bullets.

The falsification of the vaccination certificate had been discovered by the woman's employer and the couple feared they could run into serious problems with the law.

The two parents were also distressed by the idea that the judicial authorities could take their children away, according to the letter reported by the prosecutor Gernot Bantelon.

For this reason, the father allegedly killed children aged 4, 8 and 10 with bullets, his wife and then committed suicide.

A gun was found in the house, but it is not confirmed to be the murder weapon.