The super green pass pushes the first doses, there is a boom in inoculations

The approach of Christmas pushes many to take the third dose to get 'covered' at the holidays, and the new restrictions linked to the green certificate end up convincing many undecided, even if almost 6 million over 30s remain unvaccinated 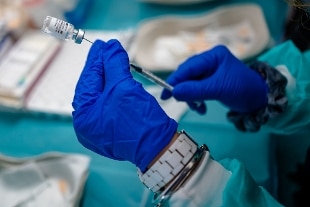 06 December 2021 The super green pass accelerates the vaccination campaign against Covid, with total doses close to 99 million that continue to grow: it is not only the recalls, which have reached 8.7 million, but also, albeit to a lesser extent, the first administrations which in some regions, such as Lazio, have doubled.

"The good news is that in the last two weeks we have practically obtained about 390 thousand new vaccinates", highlights Nino Cartabellotta, president of the Gimbe Foundation, according to whom "if this type of vaccination increase were to be maintained, within two months they will only be left the irreducible ones not to get vaccinated ". The approach of Christmas pushes many to take the third dose to get 'covered' at the holidays, and the new restrictions linked to the green certificate end up convincing many undecided, even if almost 6 million over 30s remain unvaccinated.

"We have had a 39% increase in vaccines administered in the last week - says the councilor for Health of the Lazio Region, Alessio D'Amato -, even in the first doses that have doubled, so there is certainly a boost also linked to upon the entry into force of the new instruments ". Positive trend, even if more contained, in Lombardy, with 32 thousand first doses in a week, and in the other regions.

The third doses exceed the targets set by Commissioner Francesco Paolo Figliuolo also for the cut to the duration of the green pass, now valid for 9 months and no longer 12: "We have noticed a strong concern on the part of those who have already been vaccinated but have been reduced the validity of the certificate ", explains Patrizia Laurenti, head of the vaccination center of the Gemelli polyclinic in Rome.

In the last 24 hours, 1,310,001 green passes have been downloaded, including the 'basic' ones and the 'super' version, which has just come into force.