Although the temperature showed minus 30 degrees for several days, the water in the Lainio River in Kangos in Pajala municipality is rising and ice plugs have formed. - It feels strange to see the river flood over this time of year, says Astrid Hedpalm, living near a road that has now flooded. 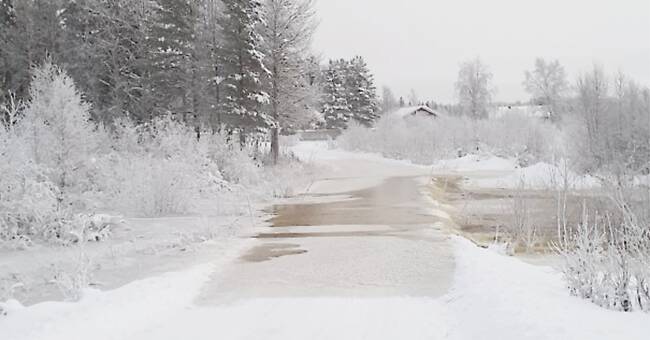 SVT has asked SMHI to explain the resulting phenomenon.

- I can see in our models that there is significantly much more water than normal for the season.

The flow is far above normal, which could be a reason why the ice is behaving differently this year, says Katarina Stensen, hydrologist at SMHI.

During the last two weeks, the weather in Pajala municipality has become increasingly cooler and the last week has been around minus 30. Taxi driver Malin Ylivaino says that the Lainio River's water flow has been the major topic of conversation among Kangos residents in recent times.

- When it was warmer a while ago, there was ice melt and the ice did not really want to freeze again.

It has been high water and last week the ice started to move and there has been an ice plug in the river and you see large ice floes, she says.

The road was flooded

The Lainio River has flooded over a private road that goes to the village's camping facility where Astrid Hedpalm usually walks daily along the road with her dogs.

- But I can not do that right now due to the water flow.

It was last week that I noticed that water rose more and more today, the water continues to flow across the road.

The weather has really gotten weird.

I wonder what the spring flood will look like when it floods even though it is minus 30 ... says Astrid Hedpalm thoughtfully.

According to SMHI, it is not uncommon for ice plugs to form in watercourses in cold weather.

Ice plugs can form either during ice discharge as large amounts of ice in the river can impede the flow.

It can also form in really cold weather when crystals form on the water surface and mix into the water masses.

The water is then filled with liquid ice crystals which flock to ice moss when the water velocity decreases.

If the water velocity is low enough, an ice cover is built up by the ice mud.

Then it builds up quickly with more ice and forms an ice plug.

The unusual thing in this case is the time of the ice plug.

This may be due to mild weather late in the autumn / winter, which has led to the ice rising and the flow being high, says Katarina Stensen, hydrologist at SMHI.

Despite the cold weather, ice plugs have formed in the Lainio River.