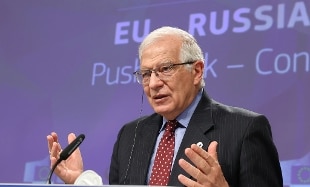 05 December 2021 "We are with Ukraine. Let everyone reflect on the consequences": this was stated by the European High Representative for Foreign Affairs and Security Policy, Josep Borrell, in an interview with La Repubblica. The EU must "first of all work to avoid the crisis", he added, "we are using our diplomatic capacity to make Russia understand that it would be a serious violation of international law".

"I also spoke to my colleague Lavrov in Stockholm and he denies any kind of belligerent activity," Borrell said. "Ukraine is certainly a partner, an ally. So we will stand by it", he assured, "the United States then made it very clear that any kind of Russian attack will not be without consequences. We will have a meeting there. next week in Brussels with the Eastern Partnership countries and it will be time to underline our strong support for Ukraine. My words must not be misinterpreted. We work to avoid the crisis but in the face of any eventuality, the EU will stand firmly behind Ukraine ".

Moscow: "We do not threaten anyone, Kiev respects agreements"

Russia reiterated that it has no intention of invading Ukraine and urged the United States to press on Kiev to abide by the Minsk agreements. "Russia is not a threat to any country", reads a statement published on Facebook by the Russian embassy in Washington, "the deployment of Russian troops on national territory is our sovereign right and nobody's business. They are NATO. and its member states who are recklessly moving their forces and military infrastructure to Russian borders. "

Russia could start a military offensive in Ukraine in a matter of months as it has deployed up to 175,000 troops along the border. This is what the CNN website states, citing new results from US intelligence. A surprising escalation that President Joe Biden has warned could lead to serious consequences, the latest developments come after months of steady increases in troops along the Russia-Ukraine border that have alarmed US and Western officials and led to tense conversations between American diplomats and their counterparts.

CNN reported Friday that Russian forces have capabilities in place along the Ukrainian border to carry out a quick and immediate invasion, including building supply lines such as medical and fuel units that could sustain a protracted conflict if Moscow chose to invade.

"Last year the hysterical estimates of the US authorities on the alleged preparations for the Russian invasion of Ukraine proved wrong."