First Observation·Moment丨"Start!" Start the "Road of Friendship" across mountains and rivers 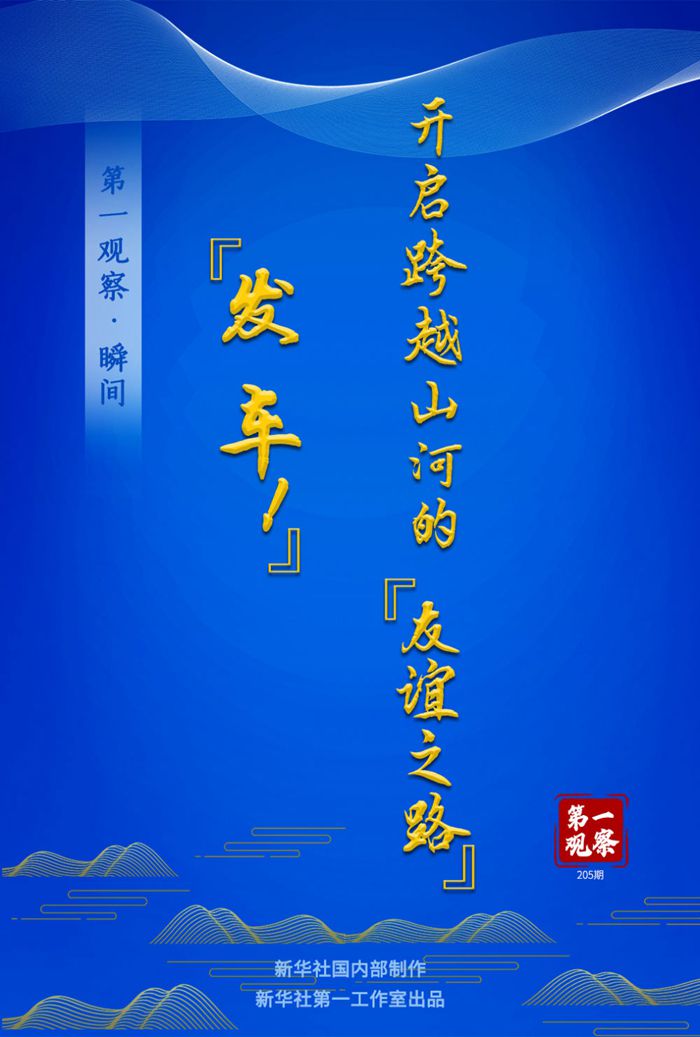 Under the common witness of the two heads of state, a "road of friendship" across mountains and rivers was officially opened.

At about 16:44, Xi Jinping and Tonglun gave the "start" instruction via video connection.

Thousands of miles away, the Fuxing Hulk at Kunming Station in China and the Lancang EMU at Vientiane Station in Laos were activated at the same time, starting a journey to each other.

This is a connected journey across mountains and ridges: Starting from Kunming, the "Steel Silk Road" crosses Mopan Mountain, Ailao Mountain, Wuliang Mountain, crosses Yuanjiang, Amo River, Babian River, Lancang River, and passes through the border between China and Laos The Friendship Tunnel enters Laos and arrives in Vientiane, the whole journey is 1,035 kilometers.

Between mountains and rivers, the ancient caravan bells have become an ensemble for the "Belt and Road" joint construction in the new era.

"Today is a proud moment. The people of all ethnic groups in Laos have finally come true. Thanks to China's strong support, Laos finally bid farewell to the era without trains and has modern railways." Tonglun expressed.

The leaders of the two parties and the two countries have always attached importance to and cared about the construction of the China-Laos railway.

In 2015, Xi Jinping and Lao leaders made a major decision to jointly build the China-Laos railway.

In November 2017, during Xi Jinping's visit to Laos, representatives of the two countries signed a series of cooperation documents such as the construction of the China-Laos Economic Corridor and infrastructure construction under the witness of the leaders.

The China-Laos Railway has become a landmark project for the high-quality joint construction of the "Belt and Road" between the two parties, which has strongly promoted cooperation in various fields.

This document specifically mentions the need to rely on the China-Laos railway to develop economic and trade cooperation focusing on interconnection and cooperation in production capacity and investment.

After the outbreak of the new crown pneumonia, Xi Jinping repeatedly emphasized the need to steadily advance the construction of major projects such as the China-Laos Railway during the call with Lao leaders.

"China and Laos worked together and cooperated closely to open up roads in the mountains and bridge the waters to complete the construction tasks with high level and high quality. The practical actions interpret the profound connotation of the spirit of the community of shared future for China and Laos, and demonstrate the concentrated strength of the socialist systems of the two countries. Special advantages for doing big things." Xi Jinping said at the opening ceremony.

In recent years, with the goal of high standards, sustainability and benefits for the people’s livelihood, China has continuously improved the level of co-construction of the “Belt and Road”, achieved mutual benefit and win-win cooperation in building a country, and opened up new space for world economic development.

"Thanks to the'Belt and Road' initiative put forward by President Xi Jinping, the Lao-China Railway was completed and opened to traffic, and the Lao people finally realized their railway dream." Tonglun said.

Spanning thousands of years, from the horse caravan running around the ancient tea-horse road, to the EMU connecting the Indochina Peninsula, starting from Kunming, a new picture of China's opening to Southeast Asia and South Asia is slowly being rolled out.

The picture rolls out, and a larger blueprint is being drawn.

In the future, with the China-Laos railway as a demonstration and radiation, all parties will also study and start the construction of the China-Laos-Thailand connecting line, and then connect with the Malaysia-Singapore railway network in the south and the China-Europe train in the north, so as to truly realize the crossing of mountains and rivers and the sea.

"China is willing to work with Laos and other countries along the route to speed up the forging of a closer'Belt and Road' partnership and jointly promote the building of a community with a shared future for mankind." Xi Jinping said.