"The absolute leader is the city of Sevastopol": the first constituent entity of Russia has reached the level of collective immunity to COVID-19 in 80%

The herd immunity level in Russia reached 53.7%. At the same time, the required level of 80% has been achieved in Sevastopol, said Deputy Prime Minister Tatyana Golikova. At the same time, the city does not intend to reduce the rate of vaccination, including because of the threat from the omicron strain. Against this background, Rospotrebnadzor reported that two passengers who returned from South Africa had a coronavirus, and a specific strain was being established. The day before, a two-week quarantine was introduced in the Russian Federation for persons arriving from this African state due to the high risks of the spread of omicron. 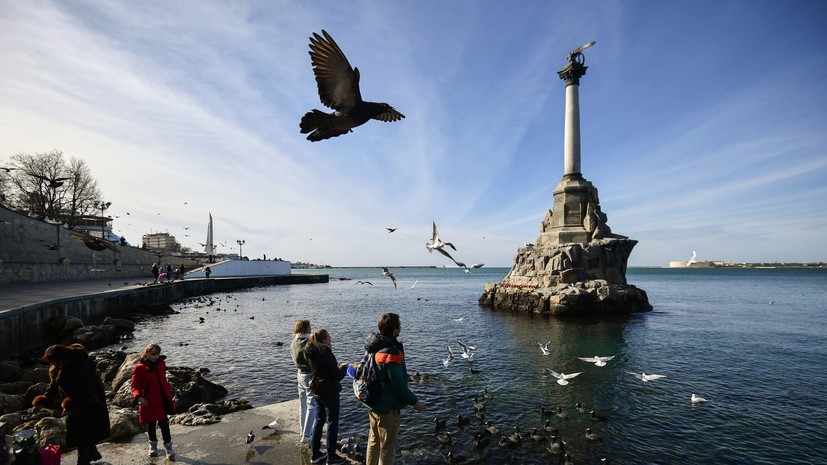 Sevastopol became the first constituent entity of the Russian Federation to achieve the government-established collective immunity level of 80%.

This was announced by the Deputy Prime Minister of Russia Tatyana Golikova.

“We have an absolute leader - the city of Sevastopol, where this figure was 80.8 percent.

In turn, the deputy governor of Sevastopol, Alexander Kulagin, indicated that the city does not intend to stop the vaccination campaign or reduce its pace.

“We will continue to maintain the pace of vaccination as much as possible, because there are all sorts of threats - for example, from the omicron.

And we want the maximum immunity of Sevastopol to be formed due to vaccinations, ”TASS quotes him.

In general, the level of herd immunity across the country is 53.7%.

“The heat map data on the stopkoronavirus.rf portal show at the same time that almost all regions of our country in terms of aggregate indicators that are used to measure the tension of the situation with coronavirus are in the red or orange zone.

This means that the virus continues to spread, and it is necessary to be vaccinated as soon as possible, ”the Deputy Prime Minister of the Russian Federation emphasized.

In July, Prime Minister Mikhail Mishustin instructed to work out ways to achieve immunity at a level of at least 80%, that is, at least 90 million Russians must be vaccinated.

Activities to prevent the spread of the omicron strain

On Friday, December 3, two passengers who returned on a private flight from South Africa on December 3 were tested positive for coronavirus by PCR, and the strain is still being established.

This was reported by the press service of Rospotrebnadzor.

They are currently hospitalized.

“Biological material from passengers is being tested in two research laboratories.

Information on the strain of the coronavirus infection is being established, ”the statement reads.

It is noted that the situation remains under the control of Rospotrebnadzor.

On the eve of the chief sanitary doctor of the Russian Federation Anna Popova announced the introduction of a two-week quarantine for citizens returning from South Africa and countries that border this state on the African continent.

This decision was made due to the “very high risks” associated with the omicron strain.

Also on russian.rt.com "The risks are still regarded as very high": Russia has introduced quarantine for those arriving from South Africa and neighboring countries

In addition, Vladimir Putin instructed the government to ensure the development of an action plan to combat the new strain of coronavirus infection by December 7.

"The government should ensure the development of an action plan aimed at preventing the spread of a new strain of the SARS-CoV-2 virus in the Russian Federation in order to protect the population from coronavirus infection (COVID-19)," the statement said.

Also, the Cabinet of Ministers was instructed to allocate funds to combat the omicron strain.

The deadline for the execution of the order is December 10, Prime Minister Mikhail Mishustin has been appointed responsible.

In addition, by December 15, the heads of the subjects, in agreement with the Ministry of Health and Rospotrebnadzor, must approve local action plans to prevent the spread of the omicron strain.

In four constituent entities of the Russian Federation, a tense epidemiological situation is observed.

This was announced by Deputy Prime Minister Tatyana Golikova.

“The epidemic situation in four constituent entities of the Russian Federation has become more tense.

These are Kaluga, Rostov, Chelyabinsk regions, the Republic of Kalmykia.

At the same time, we see improvement in the Tyumen, Nizhny Novgorod, Ivanovo regions, the Republic of Chechnya, ”she said.

In turn, the Minister of Health of the Russian Federation Mikhail Murashko, speaking at the international forum of civil participation "We are Together," announced a decrease in the wave of COVID-19 in Russia.

“Already the number of cases observed in the (health care. -

This is what really protects today, ”TASS quoted him as saying.

In the Moscow region, in the last two to three weeks, there has been a "radical decrease" in both the detected cases and hospitalizations of patients with COVID-19.

This was announced on the air of the TV channel "Russia 1" by the governor of the region Andrei Vorobyov.

He also expressed concern about the spread of the omicron strain.

“I really hope that vaccination, which we are now actively continuing to engage in, will bear fruit,” he explained.

In addition, Deputy Mayor of Moscow Anastasia Rakova spoke about more than 50% decrease in the number of cases in the capital.