Pressure on schools for children to answer the survey on Spanish: "No authorization from families is necessary"

Pressure is increasing on directors of schools in Catalonia to ask their students, without parental permission, about their language preferences. They are numerous ... 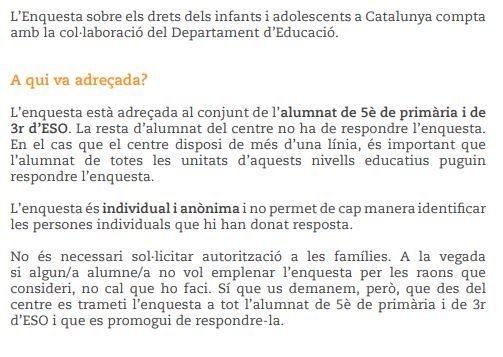 Pressure is increasing on directors of schools in Catalonia to ask their students, without parental permission, about their language preferences.

Many centers have already received the survey prepared by the Síndic de Greuges, "with the support of the Department of Education", in which students in the fifth year of Primary and third year of ESO are asked to clarify whether they use Spanish at school and if their teachers also use this language when teaching their classes, disobeying the immersion.

The questionnaire -whose existence revealed on Wednesday EL MUNDO- is being supplied to schools accompanied by a manual of «instructions» in which the Catalan Ombudsman requires the educational centers to «promote a response» and leaves written black on white that « it is not necessary to request authorization from the families »for the children to complete the test.

The Catalan Ombudsman urges to comply with his request without delay.

«The survey must be answered between November 22 and December 17.

On that day, all the students in the fifth year of Primary and the third year of ESO should have responded to the survey ", read the instructions that have been sent to the centers, and to which this newspaper has had access.

Instructions to schools to answer the survey.

The Catalan Ombudsman "advises" that the survey "can be answered in the context of a classroom activity", that is to say in the center itself, which makes it even more difficult for the children's parents to be aware of the content of the questionnaire.

Only "if it is not possible to do it in the classroom", the Catalan Ombudsman concedes that "you can answer outside of school hours".

One of the survey questions.

Students surveyed are also required to indicate in which language they receive each of their subjects.

In practice, this means being able to identify teachers who teach their subjects in Spanish, instead of in Catalan, as dictated by language immersion.

An especially sensitive aspect after the Government has asked teachers to disobey the Supreme Court ruling that requires 25% of subjects to be taught in Spanish.

In the questionnaire, the schoolchildren are asked: "When the teachers give the following classes, in which language do they do it?"

and students are required to indicate the degree of use of Catalan by their teachers in all their subjects.