Excited when Blinken and Lavrov meet in Stockholm

The Ukraine conflict is high on the agenda when the OSCE's 57 member states gather in Stockholm. The meeting between the US and Russian foreign ministers, who have not participated in an OSCE meeting for several years, is at its height. - There will be many important talks, for example between Russia and the US Secretary of State, says Foreign Minister Ann Linde (S) in the Morning Studio before the meeting. 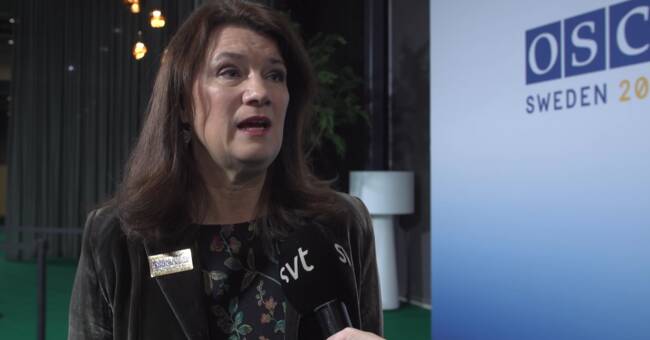 Russia's increased military activity near Ukraine's border in recent weeks has caused concern and anger both in Kiev and in the circle of NATO countries.

The Ukrainian government claims that the country's powerful neighbor to the east has mobilized 115,000 troops, including on the annexed Crimean peninsula and in the two regions of eastern Ukraine occupied by pro-Russian separatists.

The crisis is now expected to dominate the OSCE (Organization for Security and Co-operation in Europe) meeting in Stockholm on Thursday and Friday, with the participation of both Russian Foreign Minister Sergei Lavrov and his US counterpart Antony Blinken.

Already on Wednesday, an informal dinner was held where Lavrov and Blinken participated.

- The atmosphere was both serious and intense, there were quite a few exchanges between Blinken and Lavrov, especially about Ukraine and they criticized each other.

It is positive that you talk face to face and can show criticism, says Foreign Minister Ann Linde (S) in SVT's Morgonstudion.

Bilateral talks will be held between Lavrov and Blinken during the meeting.

- We all over the world want it to be relaxation and disarmament instead of armaments and harsh words.

The more dialogue the better, then it should also lead to action.

Linde is the chair of the OSCE and plans to present a text that, among other things, expresses support for Ukraine's territorial integrity, with a clear edge towards Russia.

The wording will apparently be blocked by Moscow.

The day after the NATO meeting

The OSCE meeting in Stockholm begins the day after a NATO meeting in Riga, where the Defense Alliance's foreign ministers have discussed the Ukraine conflict.

Talks continue in Stockholm, but then with Russia at the negotiating table.

On Wednesday, Ukrainian President Volodomyr Zelenskyj urged his Russian counterpart, Vladimir Putin, to pick up the phone and speak directly with him, which provoked mixed reactions in Moscow.