Johann Biacsics had refused hospital treatment, he was a denier who supported "lateral thinking" (Querdenken) to "unhinge" beliefs and logic taken for granted 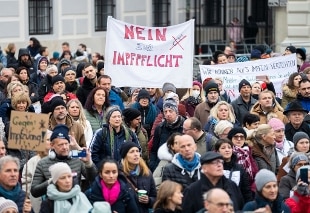 December 02, 2021 Johann Biacsics, one of the leaders of the "no vax" movement in Austria, died in Wiener Neustadt, near Vienna.

The 65-year-old fell ill with Covid and refused hospital treatment.

According to the local press, he would have treated himself at home with enemas based on chlorine dioxide which is the active ingredient in bleach.

"In intensive care we are mainly vaccinated, I have inside information": this was one of the latest statements by Biacsics. Leader of vaccine deniers in the country where the Coronavirus pandemic in the last month has recorded tragic numbers forcing the government of Vienna to establish in a few days a heavy lockdown that is also involving vaccinated people. He was a supporter of "Lateral Thinking" (Querdenken) to "unhinge" beliefs and logic taken for granted.

In early November, the freelancer was accompanied by family members to the hospital in Wiener Neustadt, a suburb of the capital, with severe breathing difficulties following the Coronavirus infection. After having repeatedly refused the administration of the vaccine, the activist also said no to the health care, asking to return home where he was convinced, treating himself with an enema of chlorine dioxide, the active ingredient of bleach, to be cured. The outcome of the molecular swab, however, had again given a positive result.

The death dates back to 10 November but emerged out of the No vax circuits only after his son Marcus launched a fundraiser online to sue the newspapers that questioned the authoritativeness of his father's studies on alternative treatments, also for diseases such as cancer. The family, however, still does not believe that Johann has contracted the coronavirus. The chlorine dioxide solution (Chlordioxid) is presented as a miraculous cure against Coronavirus in the circles of skeptics, deniers and lovers of alternative and home therapies in Austria. This "alternative" treatment, very popular among the "novax", was also suggested as a remedy by the then US President Donald Trump.

The family of the deceased, however, insists and writes on social media that even if the death "officially enters the statistics of Covid victims, we know the truth".

It is not the first case of deaths from wrong treatments against Covid in Austria.

A few weeks ago, two family members died from taking a horse vermicide.

At the beginning of November he had met the leader of the Austrian ultra-right and "no vax" convinced Herbert Kicki, who, shortly afterwards, in turn, tested positive.