El Prado by Anne Applebaum, from El Bosco to 'Duel with clubs'

It could have been any other painting, but Anne Applebaum (Washington, 1964) chose The Garden of Earthly Delights by Bosco. One of the most seductive in the gallery. One specimen ... 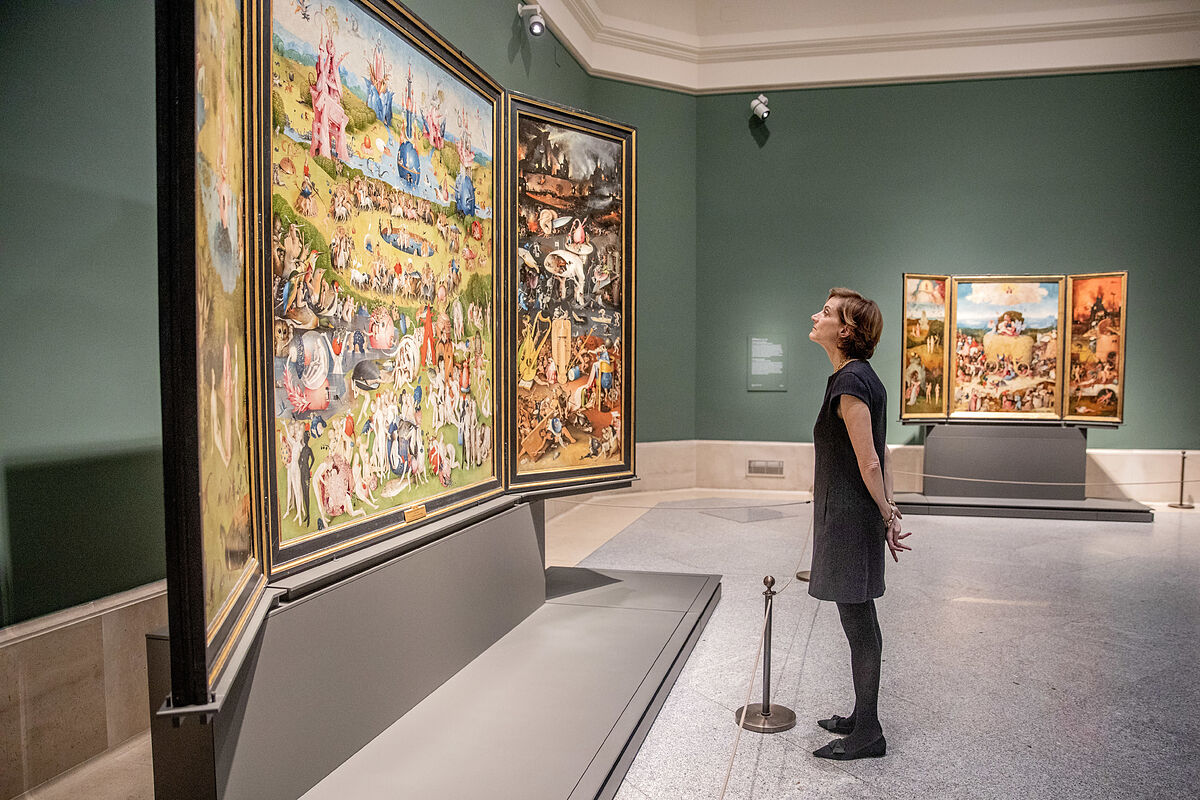 It could have been any other painting, but Anne Applebaum (Washington, 1964) chose

The Garden of Earthly Delights

by Bosco. One of the most seductive in the gallery. A specimen dated between 1500 and 1510. Oil on oak panel measuring 220 x 389 centimeters. A world spread out in three spaces: two paradises and a hell. A mental space where something very crazy shines. A civilized debate between delirium and the possibility of all challenges. "I discovered the Prado late," says the historian and columnist.

. It is a wonderful expression of strangeness"

. And with his hands behind his back, he ran his eyes over the surface, searching for something else, what cannot be seen, what sounds like a swarm of lavish follies.

In the Bosco room, number 56A, he also pauses before

The Temptations of San Antonio Abad

(1510-15). These pieces (all three) form -as the painter Eduardo Arroyo said- an insurmountable trilogy. It is convenient for Bosco to look at him with a magnifying glass and lose himself in his interiors, physically mix with him, participate in his wild verbena. And that's what Applebaum does for a few minutes, in silence, almost alone. "We have lost many things, he comments as he leaves this space to go to another space in the museum: the room with the great 19th century history paintings. There he stops before the

execution of Torrijos and his companions on the beaches of Malaga.

In this room, 075, hangs this political manifesto of Spanish painting in defense of the freedom of man crushed by authoritarianism.

The Twilight of Democracy: The Seduction of Authoritarianism

You know what you see.

You know what this is all about.

He makes another stop at

The Death of Seneca

A story of betrayal.

"The story of some works of art teach us that history is a repetition of mistakes," he says in a low voice.

This is a quick, silent visit to an empty museum. Footsteps resonate more than voices. There are some rooms behind until we reach another of the Prado's ritual sites: Goya's Black Paintings room. The light is warmer here. Almost like the mouth of a cave. On the walls, the quiet and atrocious gallop of the fragments of the walls of the Quinta del Sordo (his house next to the Manzanares river) where the Aragonese painter left his corrosive visions of a Spain of nightmare, of quarrel, of clubbing. Applebaum opens her eyes and in the middle of the room she turns 360 degrees very slowly. One only speaks well of painting by being silent before some paintings. "It's shocking, isn't it? You can read so many things here ...". We are in room 067. And he approaches the

(1820-23). There appears a man fighting against his demons. An artist resolved in disappointments. An extreme reporter of atrocious Spain. "

Reasonable, nuanced voices are much harder to hear; radicalization spreads rapidly. So does polarization. It's nothing new

We have changed the wall and now ahead is the

(1820-23). The deep hatred expressed by this painting on a wall has something diabolical about it. Wield a truth. He throws it. His debauchery is more moral than physical. Applebaum is immensely silent. Approaches. It moves away. He speaks of Goya as an infallible reporter: capable of making an exact chronicle of his time with art with all the consequences. "The difficult thing is that: to count assuming all the consequences.

For the power it is much easier to get away with it when there is no press, no reporters or journalism to reveal them

." Four steps to the left and

Again the sound of footsteps through the galleries of the Prado Museum. Facing the

(1814), Anne Applebaum also stopped. On this tour you will not see the delicate nuances of a Watteau cake. Nor the happy scenes of the Goya de la Pradera de San Isidro. Not a virgin flying from Murillo. The route marked for her is strong, hard, historical. Designed for a Pulitzer Prize for a stunning book:

And now yes: a beam of light stimuli.

Applebaum runs towards the light and stands in front of

In that painting of the sea of ​​the seas, where the sky appears from the heavens.

It is a painting created with joy.

Expand emotions of an elemental nature, which are the most welcoming.

I also believe, like this painter, that it is better to reveal things than to hide them," he

says in a very low voice.

And Applebaum comes out into the museum hall already with a light step, shaking the first hands.

With the eyes still made fountain.

He has just seen in Sorolla some brushstrokes that contain the wind, the sun and the water of enormous freedom.

That other joy of living.

Now for the award.

PhotographyColita: "The 'ideal' woman should be burned alive like Joan of Arc"