When the fire at the Eni refinery in Livorno was extinguished, there are currently no injuries recorded 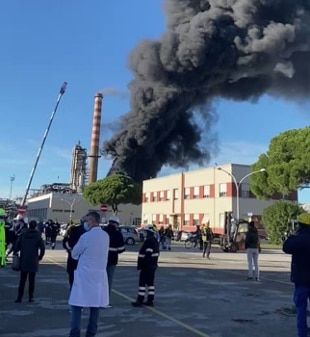 November 30, 2021 The fire that broke out today shortly after 2 pm at the Eni refinery in Livorno is limited. The Livorno fire brigade reported this. "It seems - they say - that the hot oil furnace F2 has exploded. The only one in operation at that time. The fire has been extinguished and the cooling and reclamation operations are underway. At the moment no people are involved. teams from the command of Livorno, Pisa, Lucca and Florence are operating ". Road traffic has been restored.

"It seems that fortunately there are no injuries. And it seems that the situation is under control. The firefighters are working and the fire is limited." The Livorno Usb union writes on Facebook about the refinery fire.

"I spoke to the director of the plant - confirmed the mayor of Livorno Luca Salvetti who went on site - At the moment there are no people involved in the fire of a plant under maintenance. In the meantime it seems that the Fire Brigade have managed to tame the flames ".

The Civil Protection of the Municipality of Livorno, as a precaution, invites citizens to keep the windows closed.

They let the Municipality know about the ongoing fire in a plant that is undergoing maintenance inside the Eni plant.

Mayor Luca Salvetti went to the refinery to follow the situation closely.