UAV hunter: how the modernized Pantsir-S1M complex will fight drones

The modernized Pantsir-S1M anti-aircraft system can fight all types of attack drones in service with different countries. This was reported by the Rostec corporation. In addition, the High-Precision Complexes holding announced that Pantsir-S1M will become one of the main elements of the Russian multidisciplinary system, which is designed to counter unmanned aerial vehicles. Experts call the main advantage of the complex the ability to hit small and low-speed UAVs, which are difficult targets for other air defense systems. 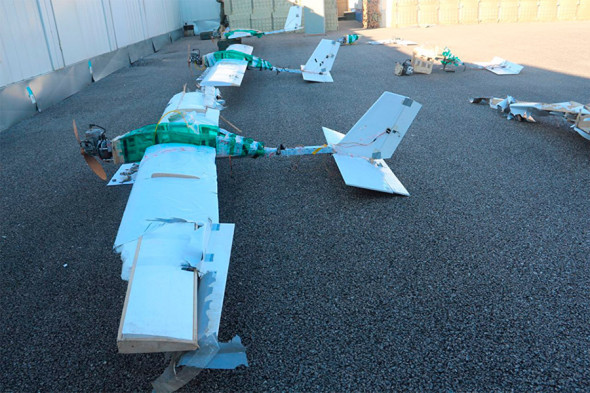 This was stated by Bekkhan Ozdoev, Industrial Director of the Armaments Cluster of the Rostec State Corporation.

“As a result of the modernization, the capabilities of the Pantsir to counter all types of drones have been significantly improved.

In particular, the complex is capable of effectively detecting and destroying all types of attack UAVs (UAVs. -

) in service, "the TASS agency quoted him as saying.

At the same time, Sergey Mikhailov, Deputy General Director of the High-Precision Complexes holding, on the sidelines of the EDEX-2021 exhibition, noted that Pantsir-S1M is capable of becoming the basis of tactical air defense.

“On the basis of Pantsir-S1M, an effective modular air defense network can be built, capable of covering any military units from small-sized and attack UAVs, high-precision weapons and, of course, military aviation - airplanes and helicopters.

The complex fully complies with modern A2 / AD principles, "Mikhailov told TASS, adding that the complex is capable of hitting small drones as well.

A2 / AD, or the so-called system of restricting and denying access and maneuver, is a theory of building various air defense systems, anti-ship missile defense and operational-tactical missile systems that allow the enemy to block access to critical areas.

Mikhailov also stressed that countering unmanned aerial vehicles is one of the most urgent tasks facing modern air defense systems.

The network combining both types of systems was first presented at the IDEX-2021 exhibition, and Pantsir-S1M will become one of its key components, in particular, the group of means of physical destruction of UAVs, ”explained the Deputy Director General of High-Precision Complexes.

Sergei Mikhailov noted that Pantsir-S1M is the least costly means of fighting drones from an economic point of view.

“The used ammunition allows us to fully meet the criterion of cost-effectiveness ratio when hitting targets.

We can confidently assume that Pantsir-S1M is the world's least expensive anti-UAV weapon, ”said a representative of the Russian defense industry.

For the first time, the Pantsir-S1M air defense missile system was presented to the general public at the IDEX-2021 international arms exhibition in February this year.

Rostec reported that the new iteration of the complex was the result of revision of the Pantsir by the enterprises of the High-Precision Complexes holding following its combat use against terrorists in Syria.

There, these air defense missile systems are used to guard the Russian Khmeimim airbase.

They have repeatedly successfully fended off homemade drones, which are difficult to hit due to their small size and low speed.

Rostec stressed that a number of foreign customers immediately showed interest in the new system.

Then, in August, Rosoboronexport, on the sidelines of the Army-2021 forum, announced the signing of the first contract for the supply of Pantsir-S1M air defense missile systems.

The upgraded complex received a new radar, providing an increased target detection range at a distance of up to 75 km.

In turn, the range of destruction of the target complex was increased to 30 km.

In the spring of this year, a number of media outlets, citing sources in the Russian military-industrial complex, reported that the modernized "Pantsir" in the future will receive special small-sized hypersonic missiles that can increase the range of the complex to 50-60 km.

Each "Armor" is equipped with 12 missiles.

In addition to missile weapons, the ZRPK has two 2A38M double-barreled 30-mm anti-aircraft guns capable of striking "air and ground targets in the zone in terms of range - up to 4 km, in height - up to 3 km," the KBP website says.

Ammunition has 1,400 rounds, and the rate of fire reaches 5 thousand rounds per minute.

At the same time, the modernized complex can also use the missiles used in the Pantsir-C1.

In addition, the stealth and noise immunity of combat work has been increased, and the fire performance per unit of time has been improved.

Earlier, the chief designer of the complex, Valery Slugin, said that drones were originally one of the types of targets that Pantsir must fight.

“At the time the complex was created, these were fairly large and high-speed aircraft-type targets.

The vulnerability of all radar systems is precisely the work on such small low-speed targets, "- quotes the words of the TASS designer.

When UAVs go at low speeds and altitudes against the background of strong reflections from the earth's surface, the target detection station is clogged, Valery Slugin explained.

“This is a very difficult problem, but Pantsir copes with it.

I do not see that other complexes could deal with such drones as, for example, a Phantom-type quadrocopter, ”the system developer emphasized.

Military expert retired colonel Mikhail Khodarenok noted in an interview with RT that the first iterations of the Shell had limited capabilities to combat UAVs.

“The system has been modernized, and indeed now it can fight all types of UAVs, especially low-speed ones.

I saw the Shell deployed in Khmeimim when I was in Syria.

He coped with all the tasks set, ”said the expert.

“The Pantsir”, in addition to the missile channel for destruction of such targets, also has a cannon channel.

This significantly increases its efficiency and economy, since an interceptor missile costs several tens of thousands of dollars, and a handicraft drone costs several hundred, ”the military expert said.

The Pantsir system has been constantly improved since the beginning of its use, and the experience of its use in the Middle East was especially taken into account, Dmitry Drozdenko, editor-in-chief of the Arsenal of the Fatherland Internet portal, told RT in an interview with RT.

“Now this machine has become much more advanced and has the ability to fight almost all types of drones.

However, this is not a panacea, and "Pantsir" should be used as part of a single layered air defense system.

That is, all elements must be present to close access to enemy air targets.

"Armor" is one of the elements of such an air defense system, and its effectiveness increases many times over when working in conjunction with the "Tor", S-300, S-400 systems, "the expert emphasized.

Dmitry Drozdenko recalled that the basic version of the system - "Pantsir-C1" - successfully coped with the massive attack of the Turkish Bayraktar UAVs in Libya.

“There is really nothing special about these drones.

One could even say that the handicraft drones used by the terrorists in Syria to carry out attacks were much more dangerous.

But with a normal air defense system with the participation of "Pantsir", neither one nor the other will even fly close to the target, "the expert concluded.