Public and private schools record mass absences before the "holiday"

Yesterday, public schools in the northern emirates recorded a mass absence of students from school hours that approached 100%, while other schools recorded high rates of absence, while private schools recorded full compliance for students of kindergarten and basic education, compared to an increase in the absence rate of 70% among students 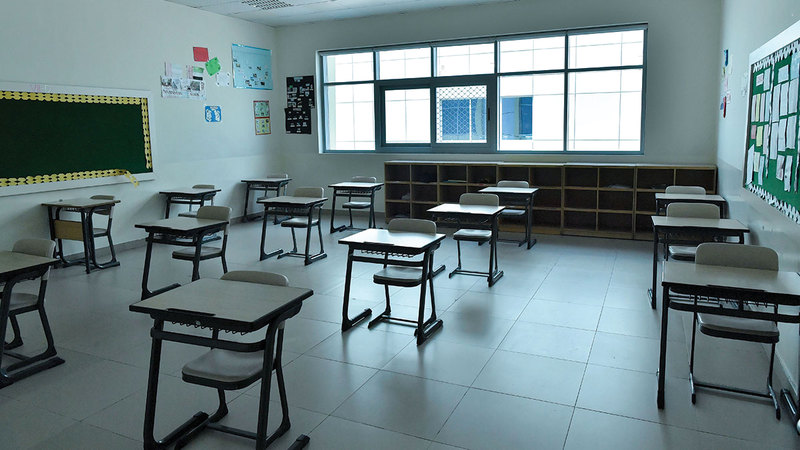 After prior agreements through “mothers’ groups”

Public and private schools record mass absences before the "holiday"

Absences frequently occur before national and religious holidays or occasions.

Yesterday, public schools in the northern emirates recorded a mass absence of students from school hours that approached 100%, while other schools recorded high absenteeism rates, while private schools recorded full compliance for kindergarten and basic education students, compared to an increase in the absence rate of 70% among middle school students. And high school, and school officials attributed the high rate of absence before the fiftieth Union Day holiday to the impact of the “WhatsApp” groups, which became the platform for prior agreement for mass absences, and the agreement of mothers through social media groups that their children not go to school, to increase the day Additional to the leave, to become five days instead of four.

Officials in public and private schools confirmed that social media groups, which include parents of students, have a significant impact on the decisions of students going to schools, explaining that each classroom has its own group on social networking programs, such as “WhatsApp”. “A father” and “Telegram”, and is not under the supervision of schools or the classroom teacher, and in which the students’ parents agree on the absence.

An administrator in a private school in the Emirate of Fujairah, Aisha Muhammad, confirmed that school administrations work with a different methodology every year, in an effort to avoid the high rate of absence, but the absence is still in large proportions, as the students’ parents agree among themselves, through social networking programs “WhatsApp” and “Telegram”, under the pretext that the curricula are over, and students sit in classrooms without any benefit.

She pointed out that at a time when students' families are demanding to establish their children and teach them writing and reading skills that they were unable to master during the period in which they spent their distance education, they do not cooperate with the school's methodology in supporting students, and allocating classes for them at the end of the semester.

The opinion was supported by a class teacher at a public school in the Eastern Province, Laila Muhammad, saying that the groups of students' families have a great impact on the schools' decisions, especially that the number of its members exceeds 25 students' families in each class, which means that each class has its own group on the programs. Social media", such as "WhatsApp" and "Telegram", and other programs for communication, noting that these groups are not under the supervision of schools or the classroom teacher, and that absences are agreed in advance.

The director of a government school in Ras Al Khaimah, who preferred not to be named, stated that the school witnessed a 100% absence, yesterday and the day before yesterday, due to the end of the first semester exams, despite the continuation of school hours for students, and the attendance of all teachers and administrative staff of the school to implement the class schedule. He added that teachers attended and students were absent from classes, as a result of their non-compliance with the Student Conduct Regulations.

He explained that although the administration informed the students' families of the importance of their children's commitment to the school hours, the day before yesterday, the absence in the classroom was complete without the presence of any student, pointing out that the absence was expected, and occurs frequently before holidays or national and religious occasions.

He pointed out that students agree, through social networking groups, on the mass absence from school hours, and that what they agree on in the virtual world is implemented in reality.

An administrator in a private school in Ajman, Osama Al-Abdullah, said that the school recorded almost complete attendance of students from kindergarten to the ninth grade, compared to the absence of 70% of students in the preparatory and secondary stages, yesterday and the day before yesterday, despite the continuation of school hours.

In addition, the mother of a primary school student in the Emirate of Fujairah, Maysoon Muhammad, said that WhatsApp groups are not a main reason for the high rate of student absence, noting that her daughter is in the first grade of primary school, and is not subject to end-of-semester exams, and when I sent her to The school was surprised by the high rate of absenteeism in class, and only a small number of students attended, which prompted the school administration to contact her to come and take her daughter.

She added that a large number of students' families do not appreciate the importance of their children attending school, which affects the rest of the students who are committed to attending, especially since the classroom teachers focus during this period on establishing students and teaching them scientific skills, such as reading and writing.

The mother of a kindergarten student in a government school in the Emirate of Fujairah, Maryam Abdullah, stated that she "inquired from the mothers in the social media group to separate her son, and they all told her that they would not send their children to school, due to the end of the curricula," explaining that she did not send her son to school, So as not to remain alone in the classroom.

She emphasized that the class teacher or the school administration did not communicate with her in order to hold her accountable for her son's absence, which made her feel that absence during the end of the semester is a common thing, especially after completing the curriculum.

• Schools registered in full compliance with the students of kindergarten and basic education.

• Groups of students' families are not under the supervision of the schools or the classroom teacher.

Violation of the student code of conduct

The director of a government school, who preferred not to be named, stated that the foundation stage was the most committed to the school hours of preparatory and secondary students, due to the influence of mothers on their children at this stage, and their obligation to attend school, adding that students in middle and high school are affected by what is circulated through the groups of “WhatsApp” is due to the absence of students, as the discussion turns into an idea, and then it is applied on the ground.

He pointed out that the school considers the students’ absence in violation of the student behavior regulations, as it was on a normal school day, stressing that the school administration will send text messages to the students’ families, informing them of the absence of their children, and their failure to attend school hours, in order to take care and attention to their children, and not to repeat the phenomenon of absence. Again on future occasions.