Presidential: Zemmour candidate to "save" France

So that the French "feel at home again", the far-right polemicist Eric Zemmour on Tuesday formalized his presidential candidacy in a dramatic video, followed by ... 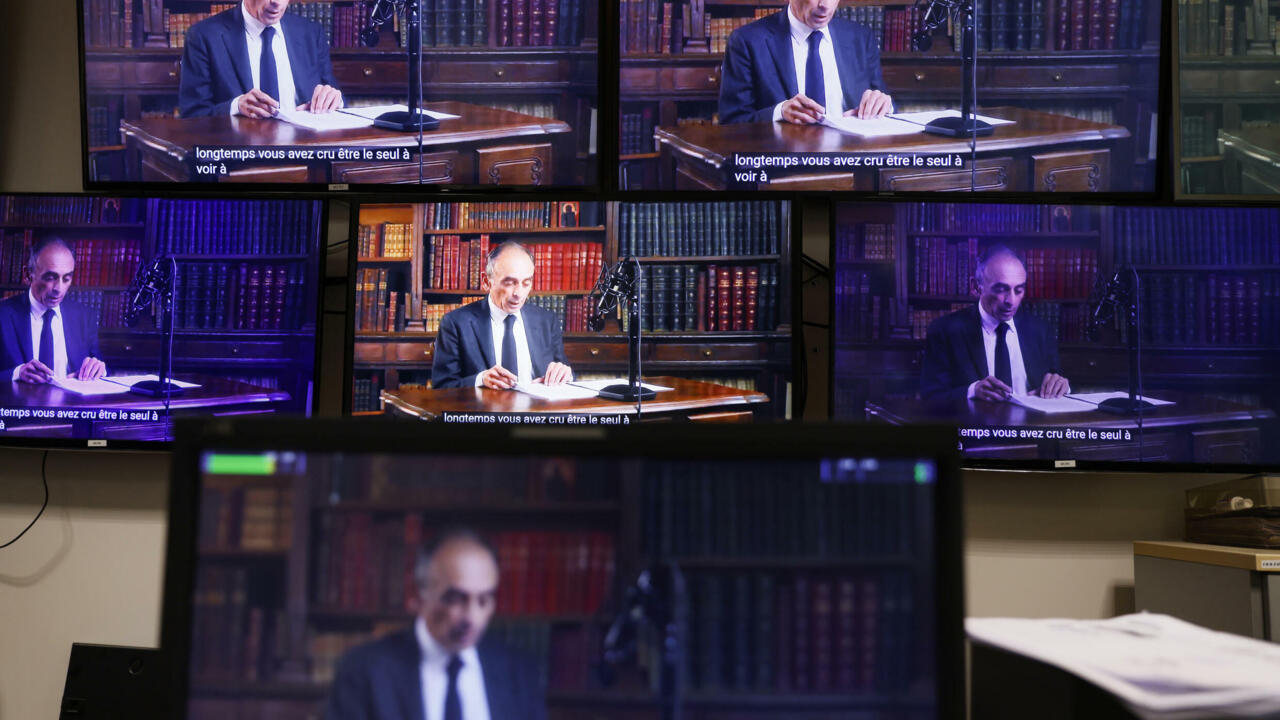 "I have decided to run for the presidential election," he announced, reading a text behind a period microphone, mimicking General de Gaulle's call on June 18, 1940.

Punctuated by the 2nd movement of Beethoven's 7th symphony, the video with nostalgic accents, recorded two weeks ago and broadcast on social networks, mixes scenes of urban violence, archives of the "Pays de Notre-Dame-de-Paris and bell towers ", Concorde, Arc de Triomphe or extracts from films.

The Gaumont cinema distributor and several media immediately denounced the use of images without their consent.

They demand the withdrawal of the extracts and consider prosecution, when the Zemmour camp invokes the "right of short quotation".

The candidate swept away "legal disputes"

In the video which had 1.2 million views in the early evening, the former columnist of CNews and Le Figaro, who appears in front of a library, addresses the French "exiles from the inside", those who "feel foreigners "in their" own country ".

Convicted twice in the past for provoking racial hatred, he presents himself to "save" France "in the process of disappearing" and "so that our daughters are not veiled and that our sons are not submitted".

Four and a half months before the presidential election, the 63-year-old polemicist sends back to back the "well-meaning", the "elites", academics, journalists, trade unionists, as well as the "Islamo-leftists" and supporters of "gender theory".

At the same time, President Emmanuel Macron paid tribute to the "universalism" of Joséphine Baker, who entered the Pantheon on Tuesday.

At 8 p.m. on TF1, Mr. Zemmour rented from her a "French first name", "the very example of an old-fashioned model of assimilation that I want to restore and that our elites, in particular Emmanuel Macron, hate and reject ".

The new candidate appeared tense in front of his interviewer Gilles Bouleau, whom he criticized at the end of the interview for not having questioned him about his project.

When he left the stage, he got angry with Mr. Bouleau, denouncing "an interview with a prosecutor" and "an intellectual swindle".

He will hold his first campaign meeting on Sunday at the Zénith in Paris.

The CGT, Solidaires and anti-fascist activists have already promised to demonstrate to "silence Zemmour".

During questions to the government in the Assembly, the Minister of the Interior Gerald Darmanin denounced the "absolutely despicable video" of Mr. Zemmour.

His speech is "dismal", Judge Sébastien Chenu, RN, embarrassed by this candidacy competing with that of Marine Le Pen on the far right.

Before the announcement of Eric Zemmour's candidacy for the presidential election on a social network on November 30, 2021 in Paris Thomas SAMSON AFP

Left and right have criticized Eric Zemmour for the "sinister staging" (Olivier Faure, PS) of an "obsessive of tradition" (Jean-Luc Mélenchon, LFI), a candidate who wants to "fracture" France (Damien Abad, LR)

The polemicist comes out of a heckled visit to Marseille concluded Saturday with an exchange of fingers of honor with a passerby.

He declared himself at a time when the polls were settling around 13% of voting intentions in the first round, behind outgoing President Emmanuel Macron (23-24%) and Marine Le Pen (19-20%).

And in a turbulent period for his camp, where some criticize an organizational deficit or the omnipresence of his advisor Sarah Knafo.

The author of "French Suicide" wants to interfere with the investiture process of the LRs who decide between their five suitors from Wednesday to Saturday, after a final debate on Tuesday evening.

Zemmour's supporters pride themselves on having already weighed on the themes of the campaign, particularly the fight against immigration and Islam, a "civilization" that he considers "incompatible with the principles of France".

Eric Zemmour defends the conspiracy theory of the "great replacement" of the European population by non-European immigrants.

Its most controversial proposal aims to ban the use of a first name of foreign origin.

The controversies multiplied during his pre-campaign.

In particular when he went to the Bataclan, on the day of the commemoration of November 13, to accuse former President François Hollande of having "not protected the French".

The hardest part begins with the collection of the 500 sponsorships of elected officials necessary for such a candidacy.

His camp ensures to rely on 250 to 300 sponsorship pledges.

He will also have to collect donations for his campaign, when he has already lost the support of the financier Charles Gave, who lent him 300,000 euros.

The polemicist is also accused of sexual assault according to several testimonies of women collected by Mediapart.

But no complaint has been announced against him.