For the well-being of the 2.7 billion people in Central Africa, Xi Jinping announced the joint implementation of "Nine Projects"

Current Affairs News 丨 For the well-being of the 2.7 billion people in China and Africa, Xi Jinping announced the joint implementation of "Nine Projects"   Three years ago, the Beijing Summit of the Forum on China-Africa Cooperation adopted the "Beijing Declaration" and decided to hold the new forum meeting in Senegal in 2021.   Three years later, despite the pandemic of the century, China and A 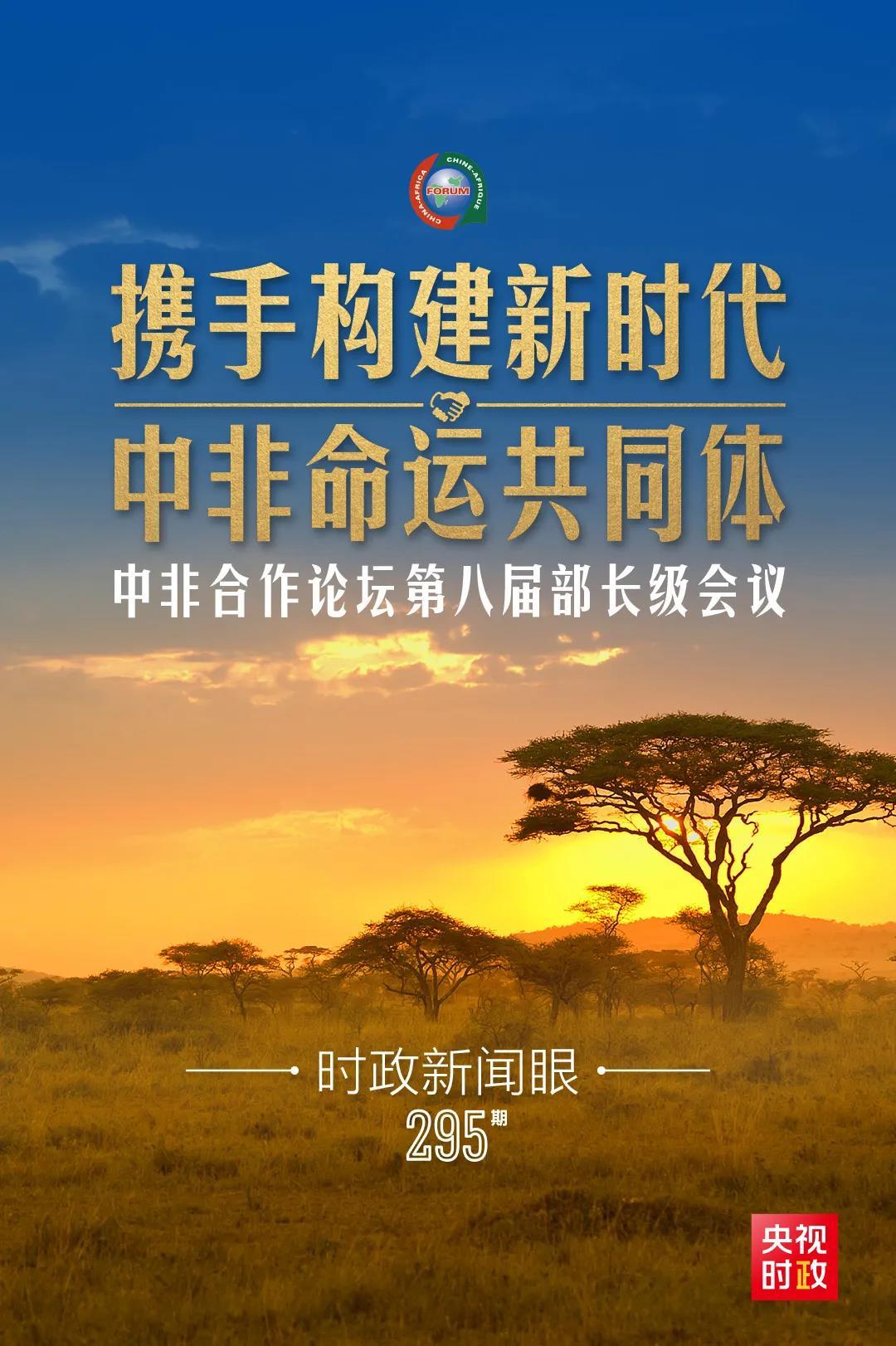 Current Affairs News 丨 For the well-being of the 2.7 billion people in China and Africa, Xi Jinping announced the joint implementation of "Nine Projects"

Three years ago, the Beijing Summit of the Forum on China-Africa Cooperation adopted the "Beijing Declaration" and decided to hold the new forum meeting in Senegal in 2021.

Three years later, despite the pandemic of the century, China and Africa held this grand event as scheduled.

This is also the largest physical diplomacy that China has jointly organized overseas after the outbreak.

On the evening of November 29, President Xi delivered a keynote speech at the opening ceremony.

What major measures has he announced for cooperation with Africa?

What kind of benefits will it bring to the 2.7 billion people in Central Africa?

The Forum on China-Africa Cooperation was established in 2000 and currently has 55 members, including China, 53 African countries that have diplomatic relations with China, and the African Union Committee.

The Ministerial Conference of the Forum is held every three years, alternately in China and African countries.

The opening ceremony of the 8th Ministerial Conference of the Forum on China-Africa Cooperation was held here.

Last year was the 20th anniversary of the establishment of the Forum on China-Africa Cooperation.

At the time of the epidemic, on June 17, China, South Africa, and Senegal jointly initiated a special gathering by video mode-the China-Africa Unity Anti-epidemic Special Summit.

The joint statement of the special summit stated that "China-Africa cooperation is planned in the post-epidemic era, and we will work together to successfully host the new forum meeting in 2021."

△The flag array placed at the opening ceremony that day.

On November 29 this year, the 8th Ministerial Conference of the Forum on China-Africa Cooperation was held in Dakar, the capital of Senegal. Senegalese President Sall attended and presided over the opening ceremony. The presidents of the Democratic Republic of Congo, Egypt, Comoros, South Africa and Africa The Chairman of the League Committee and the Secretary-General of the United Nations attended the meeting via video.

President Xi Jinping attended the opening ceremony in Beijing via video connection and delivered a keynote speech entitled "Together in the same boat, carry forward the past and open the future, and join hands to build a China-Africa community with a shared future in a new era."

The first is the

65th anniversary of the inauguration of diplomatic relations between China and Africa.

On May 30, 1956, China and Egypt established diplomatic relations at the ambassadorial level.

In January 2016, President Xi Jinping talked about this past during his visit to Egypt: "60 years ago, the leaders of the older generations of the two countries had great foresight and opened up contemporary Sino-Egyptian diplomatic relations, as well as the diplomacy between New China and Arab and African countries. The door."

△In the East Hall, a flag array composed of flags of China, 53 African countries and the flag of the African Union.

The second is the

China's restoration of its legal seat in the United Nations.

On October 25, 1971, the 26th United Nations General Assembly passed Resolution 2758 by an overwhelming majority, restoring the legal seat of the People’s Republic of China in the United Nations.

These two important events with far-reaching impact have closely linked the people of China and Africa.

"Why are China-Africa relations good? Why is China-Africa friendship deep?" In the keynote speech on November 29, Xi Jinping replied: The key is that China and Africa have created a long-standing Sino-African spirit of friendship and cooperation, that is,

"sincere friendship. , Treat each other as equals, mutual benefit and win-win, common development, uphold justice, defend justice, adapt to the current situation, and be open and inclusive"

These 32 characters are a true portrayal of China and Africa sharing weal and woe and struggling side by side for decades.

This sentence in the white paper echoes President Xi’s speech, explaining the "secret" of China-Africa friendship:

"China-Africa relations did not develop in a day, let alone a gift from someone. Instead, China and Africa are in the same boat, sharing weal and woe, step by step."

△On November 23, 2021, the University of Dakar, Senegal held a Chinese language professional promotion and press conference at the Confucius Institute, which marked the official entry of Chinese language education into the Senegalese higher education system.

Since the 18th National Congress of the Communist Party of China, President Xi Jinping has visited Africa four times and upgraded the ministerial meeting of the Forum on China-Africa Cooperation to a summit for two consecutive years.

At the 2018 Beijing Summit, President Xi proposed to build a closer China-Africa community with a shared future.

At this year's forum meeting, he proposed to join hands to build a China-Africa community with a shared future in a new era.

In the two previous summits of the Forum on China-Africa Cooperation, President Xi put forward pragmatic cooperation measures for the future.

In December 2015, at the Johannesburg Summit, President Xi announced that China is willing to focus on implementing the "Ten Major Cooperation Plans" with Africa in the next three years.

In September 2018, President Xi announced the implementation of the "Eight Major Actions" at the Beijing Summit, which became the biggest highlight of the summit's practical results.

Promises must be kept and action must be resolute.

Except for the personnel training affected by the epidemic in the "Eight Major Actions", satisfactory answers were all handed in.

On the eve of this year's forum, the relevant person in charge of the Ministry of Commerce revealed that during this meeting, China and Africa will jointly release the "China-Africa Cooperation Vision 2035", laying the main framework for cooperation between the two sides in the next 15 years.

In the keynote speech at the opening ceremony on November 29, President Xi Jinping announced that as the first three-year plan of the "China-Africa Cooperation Vision 2035", China and Africa will jointly implement "nine projects."

From the "Ten Major Cooperation Plans", "Eight Major Actions" to "Nine Projects", each item has quantitative indicators, and each item has an implementation ledger. Each item is based on China's "True, Affinity, and Sincerity" concept and correctness. Vivid embodiment of the concept of justice and benefit.

"Nine Projects" for the benefit of the people

The needs of the people and the direction of cooperation.

The pragmatic measures for China-Africa cooperation are based on the fundamental interests of the people of China and Africa and the real needs of African countries, keeping pace with the times and innovating continuously.

The "Health Project" has

risen to the "Number One Project" among the "Nine Projects".

China actively fulfilled its commitments and took the lead in providing vaccines to African countries.

It is understood that nearly 200 million doses of vaccine have been provided to Africa.

In recent years, the digital economy has become a new highlight of China-Africa cooperation.

△In March 2021, China and Rwanda formally signed a bilateral protocol on the trade of dried peppers.

Rwanda is the first country in which African-origin dried chili products have been allowed to enter the Chinese market.

One of the "nine projects" is the

At the beginning of this century, the leaders of African countries decided to build a "Green Great Wall" spanning the sub-Saharan region with a width of 5 kilometers and a length of 7000 kilometers. This is the largest green project on the African continent.

In the keynote speech at the opening ceremony, President Xi made it clear that he supported the construction of the "Great Green Wall in Africa".

△In December 2019, the 50 MW photovoltaic power station in Garissa, Kenya, contracted by a Chinese company, was officially put into operation.

This is the first power generation project supported by the “Belt and Road” concessional loan in Kenya.

In the "Trade Promotion Project", we strive to achieve a total import volume of US$300 billion from Africa in the next three years.

In the "Investment Driven Project", China will promote enterprises to invest no less than US$10 billion in Africa in the next three years.

In the "Capacity Building Project", non-Chinese companies are encouraged to provide local jobs with no less than 800,000 jobs...

Each of the "nine projects" is a project of

people's will and conscience

△In June 2021, the Nigerian Rye Railway contracted by a Chinese company was officially opened to traffic.

This is the train passing through the local community.

"Anything promised to the African brothers will be done with all our heart." "China-Africa cooperation should bring visible and tangible results and benefits to the people of China and Africa." Turn our common aspirations and common interests into common actions"... President Xi’s words inspire the land of Africa and warm the African people.

Even though they are thousands of miles away, they are always hand in hand.