Anne Applebaum: "Our culture depends on the rational conversation and civilized debate that inspires the best journalism"

Members of the jury, friends and colleagues, ladies and gentlemen, Let me begin by expressing my deepest gratitude to EL MUNDO, the award jury, the authorities of ... 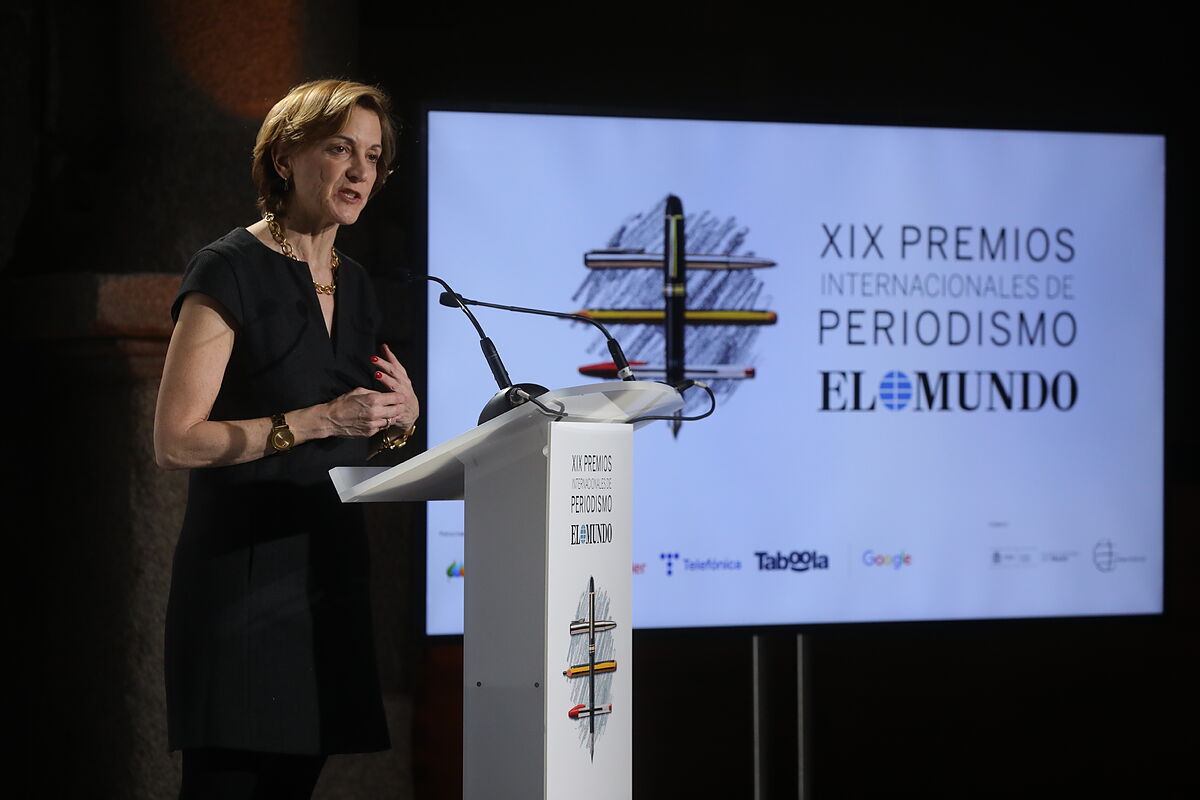 Members of the jury, friends and colleagues, ladies and gentlemen,

Let me begin by expressing my deepest gratitude to EL MUNDO, the award jury, the government authorities who have joined us and all of you who have taken the time to come here tonight to celebrate journalism, the press and the possibility of a civilized debate.

EL MUNDO, as you all know very well, is a newspaper founded in 1989, the year that marked the beginning of an era of optimism, in Europe and around the world: optimism for liberal democracy, and optimism for the possibilities of free media also within democracies.

In the beginning, it seemed that the Internet would be good for both democracy and newspapers.

Above all, it seemed that the Internet would be good for public conversation and debate.

We now live in a different era, one in which the nature of public conversation has changed dramatically. Entertainment, social interaction, education, commerce and politics are moving from the real world to the virtual world, a process recently accelerated by the coronavirus pandemic. In the course of this massive and revolutionary change, a change really only comparable to the invention of the printing press in the 16th century, much has been gained, especially for journalists.

We can all reach more audiences than ever. We can innovate using video and audio to improve our writing. We can do things at a speed unthinkable only a generation ago. New publications and new media entities are much easier to create. People who once felt left out of the national conversation can now participate.

But we have also lost many things. Because not only information has moved online, but civil society. And this has consequences, both for journalism and for democracy. If citizens ever participated in civic organizations or political parties that gave them a sense of community, many now participate in politics by joining Internet mobs, clicking "like" or "share" and then pulling forward. Instead of walking into a real-life public square and openly arguing with our fellow citizens, we anonymously head to digital spaces where we rarely meet people with whom we disagree. Our conversation is governed by algorithms designed to capture attention, collect data, and sell advertising.The voices of the most angry, most emotional, most divisive, and often most misleading participants are amplified.

Reasonable, rational, and nuanced voices are much more difficult to hear; radicalization spreads rapidly. So does polarization. If one half of the country cannot listen to the other, then we can no longer have shared institutions, apolitical courts, a professional civil service, or a bipartisan foreign policy. We cannot compromise. We cannot make collective decisions, we cannot even agree on what we are deciding.

In this new world, some of our politicians have sought to take advantage of the situation by encouraging people to distrust reliable sources of information. National leaders like

make fun of independent journalists and news organizations. They turn press conferences into shams. Sometimes that kind of teasing and assault turns into actual violence, but even when it doesn't, it can be very powerful. They can convince millions of people not to get life-saving vaccines, for example. It can convince them to turn against democratic institutions or against the electoral system itself.

They can also convince the public to ignore the evidence of actual corruption. In fact, it is no coincidence that corruption, autocracy and the weakness of the media go together so often. As the employees of this newspaper well know, it is much easier to get away with it when there is no press, no reporters or journalism to reveal them.

That, of course, is why we are here tonight: because we still believe that it is better to reveal crimes than to hide them. We are also here because we know that in this new world, in communities like this, there are groups of people who still believe that it is important to research, report and publish information, so that we are all better informed, and they are more important than ever. Everyone in this room knows that if we want to fight the cacophony of the online world, we must work together, across the media industry, in society, sometimes across borders. Everyone in this room knows that if we are going to fight autocrats, kleptocrats and the enemies of democracy within our own countries, we may even have to take risks. Remember,the three journalists in whose name this award was created,

, gave their lives to keep the world better informed. But many people here tonight would do the same.

Let me end by expressing my gratitude for this award, but not because it was presented to me.

Without good information, diplomacy, trade and, of course, democracy itself will be impossible.

Our public culture depends on the rational conversation and civil debate that the best journalism inspires.

Organizations like this, nights like this, remind us all of the importance of freelance writing, independent broadcasting, and independent thinking for our civic institutions, including our way of life.

I thank you all for your work and I look forward to reading more in the future.

EditorialNegligence that precipitated the Avila fire

EditorialTurbios ties of Chavismo with the Government

Signatures Times change and harden, the values ​​of journalism are the same