"Inclined to suicide": the court sentenced the former schema-abbot Sergius to 3.5 years in prison

The Izmailovsky Court of Moscow issued a verdict in the case of the former schema-abbot Sergius (Nikolai Romanov), excommunicated from the church in September 2020. He was found guilty under three articles of the Criminal Code of the Russian Federation: "Inclination to commit suicide", "Violation of the right to freedom of conscience and religion" and "Arbitrariness". The court ruled to impose a total sentence on him in the form of imprisonment for a term of 3.5 years with his serving in a general regime colony. Romanov's defense intends to appeal the verdict. 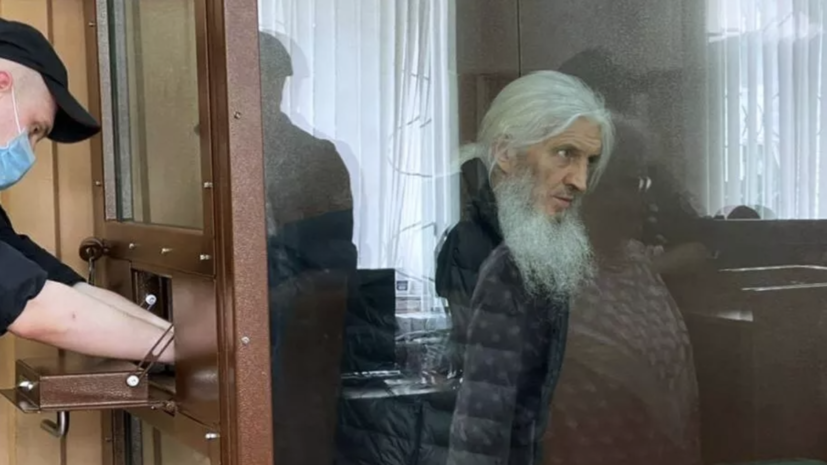 On Tuesday, November 30, the Izmailovsky Court of Moscow announced the verdict to the former schema-abbot Sergius (Nikolai Romanov).

The ex-priest was found guilty under Part 1 of Art.

330 of the Criminal Code of the Russian Federation ("Arbitrariness"), part 3 of Art.

148 of the Criminal Code of the Russian Federation ("Violation of the right to freedom of conscience and religion") and nn.

110.1 of the Criminal Code of the Russian Federation ("Inclination to commit suicide").

According to the verdict, he used "manipulative mass psycho-violence", and being defrocked and excommunicated, he voluntarily lived in a monastery, where he "persuaded two or more persons to commit suicide."

The verdict also notes that Romanov acted deliberately and prevented representatives of the Yekaterinburg diocese from entering the territory of the monastery.

The court ruled, by partial addition of sentences, to sentence the former priest to 3.5 years in prison in a general regime colony.

The defendant did not admit his guilt.

“I did not call for suicide, but for the readiness to sacrifice life, for religious feat ... I myself dream of repeating the path of Christ, I go to this with my whole life,” Romanov said in his last word.

66-year-old Nikolai Romanov can be called one of the most controversial priests in Russia.

In the late 1970s, he worked in the police, but several years after his dismissal from the authorities, he himself became a defendant in several criminal cases.

He was tried for embezzlement of state property, fatal traffic accident, robbery and murder under aggravated circumstances.

For the cumulative crimes, he received 13 years in prison.

After being released from prison in 1997, Romanov decided to devote himself to God.

He entered a novice monastery in the name of the New Martyrs of Russia, built on the site of the murder of members of the royal family in the city of Alapaevsk, Sverdlovsk region.

In 2000, Sergius was appointed the first abbot of the monastery of the Holy Royal Passion-bearers, and in 2002 he became the confessor of the women's monastery in the name of the Icon of the Mother of God "The Contestant of Breads" near Sredneuralsk.

Romanov became famous, in particular, for his ambiguous and shocking statements, as well as for the fact that he practiced exorcism.

Serious disagreements between Sergius and the church began in the spring of 2020 after he began posting videos on the Internet calling to attend church despite the coronavirus restrictions imposed, and also talked about the threat of chipping, which, in his opinion, would be imposed through compulsory vaccination.

The Center for Countering Extremism of the Main Directorate of the Ministry of Internal Affairs for the Sverdlovsk Region saw in its actions signs of administrative offenses under Part 9 of Art.

13.15 of the Code of Administrative Offenses of the Russian Federation ("Dissemination of ... deliberately inaccurate socially significant information under the guise of reliable messages"), as well as under Art.

20.3.1 of the Administrative Code of the Russian Federation (“Incitement to hatred or enmity, as well as humiliation of human dignity”).

In July, he was found guilty and fined a total of 108 thousand rubles.

At the beginning of July 2020, the Yekaterinburg diocese banned the schema-abbot from serving and deprived him of the right to wear the pectoral cross.

The conflict has attracted media attention.

Journalist Ksenia Sobchak came to the monastery, but her film crew was attacked, the camera was smashed and the footage was taken away.

A pre-investigation check carried out after the incident revealed signs of a crime under Art.

144 of the Criminal Code of the Russian Federation (“Obstruction of the legitimate professional activities of journalists”), however, no criminal case was initiated.

By the decision of the church court, Sergius was deprived of the rank of schema-abbot, excommunicated and had to leave the monastery, but despite the demand of the diocese, he continued to perform divine services.

In his sermons, he urged the nuns to "die for Russia."

Moreover, there were children among the parishioners.

The corresponding video appeared on the Internet.

On this fact, a criminal case was opened against Sergius under the article on inducement to suicide.

In addition, he did not allow representatives of the Yekaterinburg diocese of the Russian Orthodox Church to enter the territory of the monastery, thus hindering the conduct of religious rituals, as well as inventory.

For this he was charged with the article "Arbitrariness".

In October 2020, the Investigative Committee opened another criminal case under the articles "Torture" and "Negligence" against unidentified persons who systematically beat children within the walls of the Sredneuralsky nunnery.

On the night of December 29, the Sredneuralsky monastery was taken by storm, Sergius was detained for testifying and convoyed to Moscow.

By the decision of the Basmanny Court, he was arrested on charges of inducement to suicide, violation of the right to freedom of conscience and religion and arbitrariness.

In August 2021, the Romanov case was sent to court.

The state prosecution requested four years in a general regime colony for the former schema-abbot.

His lawyers intend to appeal the verdict.