In conjunction with protests and roadblocks in Lebanon, Aoun calls on Qatar to invest in his country

Angry Lebanese closed roads in large areas of the country in protest against the deteriorating economic conditions and the collapse of the currency, while the Lebanese president said he would invite Qatar to invest in his country and help it rise again. 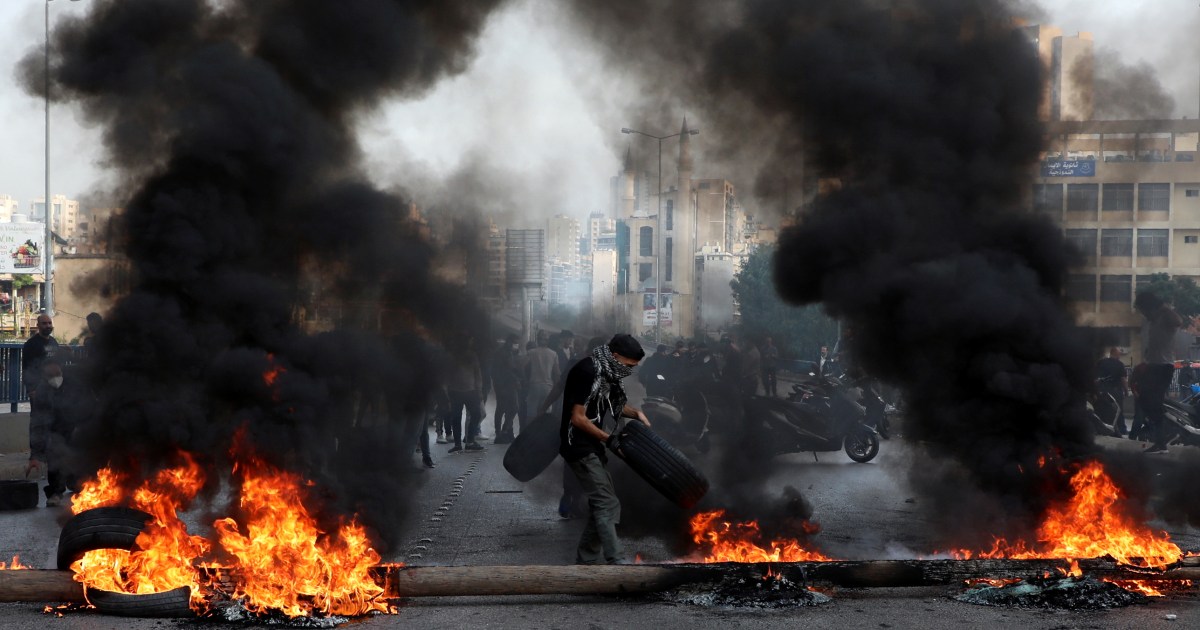 Angry Lebanese closed roads in large areas of the country in protest against the deteriorating economic conditions and the collapse of the currency, while Lebanese President Michel Aoun said he would invite Qatar to invest in his country.

Dozens of protesters closed a number of internal roads and entrances to the capital, Beirut, and areas in the Bekaa Valley in eastern Lebanon, Tripoli in the north, and the city of Sidon in the south.

The protesters placed waste containers, some obstacles and stones in the roads, to prevent citizens from reaching their work.

In the city of Tripoli in the north, protesters blocked some of the city's main and subsidiary streets with burning tires, waste containers and stones, in addition to parking some cars and trucks in the middle of the road.

The streets of Tripoli witnessed a heavy deployment of army elements, at a time when many schools were suspended, in order to preserve the safety of students.

The protesters also blocked main roads in the city of Sidon (south) with burning tires, in protest against the living conditions and the continuous power cuts.

As for the Bekaa (east), the Traffic Control Room reported - in a tweet via Twitter - blocking a number of roads in the city of Zahle and Chtaura, in protest against the price hike.

In the past hours, calls have been sent through social media to close roads, denouncing the deteriorating living conditions in Lebanon.

And the Lebanese pound recorded an additional decline this week, as the exchange rate of one dollar reached 25,000 pounds in the parallel market, while its official price is 1,515 pounds.

More than two years ago, Lebanon was beset by a severe economic crisis, classified by the World Bank as one of the 3 worst economic crises in the world, which led to a financial and living collapse and a rise in poverty and unemployment rates.

In a related context, Lebanese President Michel Aoun said he would call on Qatar to implement multiple investments in his country, in an attempt to inject new liquidity that would be able to help the country rise again.

In statements to the Qatari newspaper, Al-Raya, Aoun added that his country needs Qatari investments in several sectors, such as electricity, infrastructure and the banking sector.

He added that there are no basic Qatari investments in Lebanon, knowing that the land is fertile at the present time, noting that he will invite the Emir of Qatar, Sheikh Tamim bin Hamad Al Thani - during his visit to Doha - to direct investment in the reconstruction of the port of Beirut.

The economic crisis that erupted in 2019 pushed more than 3 quarters of the population into poverty, and the local currency depreciated by more than 90%.

There has been no significant progress since the appointment of Prime Minister Najib Mikati's government last September, after more than a year of political stalemate that exacerbated the crisis.

Mikati's government has been in a state of stalemate since a dispute over the main investigator in the Beirut port explosion last year erupted during a cabinet meeting on October 12.

The cabinet has not met since then.

Subsidies were cut on almost all goods, including fuel and medicine, driving up prices as basic services such as health care collapsed.

The cabinet's main focus has been on reviving talks with the International Monetary Fund, which are essential for foreign aid, but no agreement has been reached on vital financial numbers, a requirement to resume negotiations.