They were placed on the lists of terrorism, despite their death.. Akef and Al-Arian return to the communication sites in Egypt

A wide interaction on the communication platforms in Egypt, following the decision of the Court of Cassation to support the inclusion of a number of Muslim Brotherhood leaders on the lists of terrorism, including the late Muhammad Mahdi Akef and Essam El-Erian. 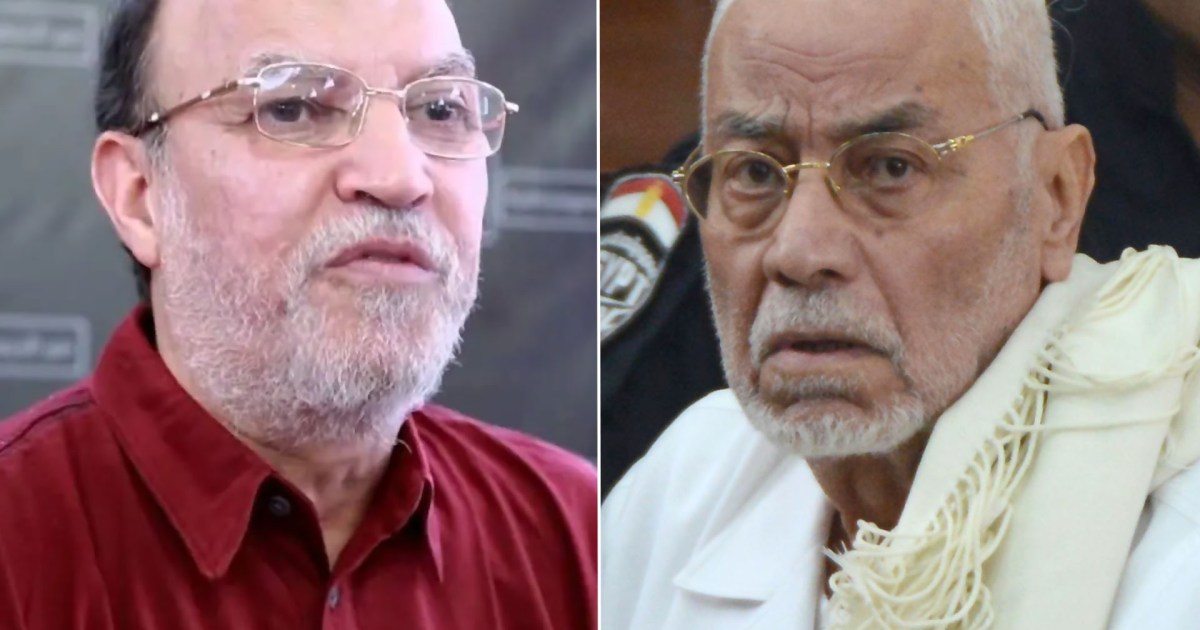 Extensive interaction on social media platforms in Egypt, following the Egyptian Court of Cassation’s decision to support the inclusion of a number of leaders of the Muslim Brotherhood on the lists of terrorism, and it was remarkable that among them were two of whom God has passed away, the former guide Muhammad Mahdi Akef and the prominent leader Essam Al-Erian, who was a deputy The Freedom and Justice Party (the political arm of the group).

The two men died after suffering from illness in harsh conditions inside prisons, according to their testimonies before the court.

Yesterday, Saturday, the Court of Cassation rejected the appeal submitted by Muslim Brotherhood leaders against the decision to include them on the lists of terrorism, and decided to support the decision issued by the Criminal Court to include them all for a period of 5 years on the lists of terrorism, despite the death of Akef and Al-Arian, who included in the list in addition to both the former Speaker of the People’s Assembly Muhammad Saad Al-Katatni, the prominent politician Muhammad Al-Beltagy, in addition to Rashad Bayoumi, Ahmed Shousha, Muhammad Abdul-Azim Shaarawy, and Mahmoud Al-Zanati.

The Cairo Criminal Court had issued a decision to include the accused on the lists of terrorism for a period of 5 years, starting from the date of the decision’s issuance, with the consequences of that in accordance with the text of Article 7 of Law 8 of 2015 amended by Law 11 of 2017, according to the Egyptian newspaper Al-Ahram.

The decision of the Court of Cassation to include the deceased on the list and not to exclude them sparked a wide interaction on social media platforms, as some news sites affiliated with the authority referred to it with some surprise, especially since it was issued years after the death of the first and more than a year after the death of the second.

It is worth noting that Issam El-Erian is a physician and politician, born on April 28, 1954. He was elected as a member of the People's Assembly (Parliament) in the 1987-1990 legislative term from the Imbaba district. He was the youngest member of parliament in that session, which was dissolved before the completion of its constitutional term.

The man died on August 13, 2020, of a heart attack in Al-Aqrab prison at the age of 66, where several sentences of life imprisonment (25 years) were issued against him, in a number of cases, including what was known as the case of storming the eastern borders, the events of Qalyub, and the case of the events of the Great Sea. .

Al-Arian, who was arrested on October 30, 2013, said in previous statements that he had contracted the hepatitis C virus inside prison, and that the National Security Agency had objected to his treatment, and had complained in previous court sessions about being denied treatment and being subjected to medical neglect.

Despite their deaths .. Egyptian authorities continue to

include Mahdi Akef and Essam el -

The Court of Cassation supports the inclusion of the late leaders of the Muslim Brotherhood, Mahdi Akef and Essam El-Erian, on the “terror lists” for a period of 5 years, according to what was published by the Official Gazette,

The dead are on the lists of terrorism..Professor

on the lists of terrorism for 5 years.

What is the point of

state terrorism in its ugliest forms.

Dr. Amr Darrag called me to tell me an appointment that he and Dr. Essam El-Erian (the party head at the time) would attend with the ASEAN ambassadors and asked me to join the meeting in a Cairo hotel;

After the meeting and all the ambassadors riding in their luxury cars, I found d.

I don't know whether Alzheimer's worked with me, or what is the story... Huh, Issam Al-Arian is dead or alive, and if he was dead, why was his name not crossed out of the list for his death pic.twitter.com/94wrEPzlhF

As for the former General Guide of the Muslim Brotherhood, Muhammad Mahdi Akef, he died on September 22, 2017, at the age of 89, in a hospital west of Cairo, after his health deteriorated in prison.

Akef is the seventh guide in the history of the group, and he was elected general guide of the Muslim Brotherhood in 2004 after the death of his predecessor, Mamoun al-Hudaybi, and his presidency of the Guidance Office ended in 2010, so he refused requests for an extension to elect Muhammad Badi as his successor (also imprisoned).

The court acquitted Akef of the charge of insulting the judiciary, but he remained in prison pending another case, the events of the Guidance Office (which took place in the summer of 2013 following clashes between supporters and opponents of the Brotherhood), and a life sentence (25 years) was issued against him, which was overturned by the Court of Cassation (highest). A nationwide appeals court) in January 2017.