Referendum in Switzerland: vote on the "Covid certificate"

The Green pass is mandatory from 13 September to go to the restaurant, the gym, the cinema or participate in major cultural or sporting events. It should be reconfirmed 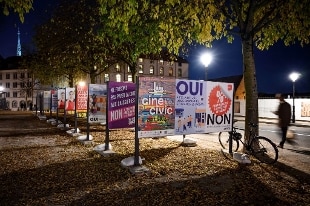 November 28, 2021 The only country in the world, Switzerland is voting today for a referendum on the green pass, which here is called the 'covid certificate' and is mandatory from 13 September to go to a restaurant, gym, cinema or participate in major cultural or sporting events . Despite the aggressive electoral campaign of the opponents, forecasts are that the green passport will be confirmed.

The polls indicate a stable percentage of 61% in favor of this measure and a base of 38% against, with only 1% undecided. Also because the law includes financial aid that otherwise would not be extended.

The vote takes place while the infections have resumed running in Switzerland with a very high incidence, now reaching 870.82 infections per 100 thousand inhabitants over two weeks. Added to this is the concern over the Omicron variant, which led to the ban on flights from southern Africa. Not to mention the fact of the boom in infections in the two neighboring countries, Germany and Austria, which is in full lockdown.

The Swiss federal government has not enacted new restrictions in the face of the surge in infections, leaving the task to the cantons, which in many cases have tightened the rules, especially as regards the obligation to wear a mask.

The green pass, on the other hand, is widespread throughout the Confederation. The No to certificate front considers it a violation of individual freedoms and has conducted a massive campaign, with large posters in railway stations, protests and a strong presence on social networks.

However, the majority of Swiss people remain in favor of the green pass. And he already said this in another referendum in June, when 60.2% approved the previous version of the law on containment measures. Less than a month later, enough signatures had been collected to submit the latest changes to the provision to a referendum. The scenario therefore appears to be that of a significant part of public opinion very decided against the covid certificate, which however remains a minority. However, the split seems to be reflected in the vaccination rate, which is 65% of the population.

Today there is also a vote on a provision to re-evaluate the profession of nurses in terms of training, wages and working hours.

Government and parliament believe that the popular initiative put to the vote is excessive and have launched a less onerous counter-proposal, which will come into force if it is rejected.

However, the polls predict a success, with 67% of votes in favor.

Finally, the rejection of the third question seems practically certain, which proposes to designate federal judges by drawing lots, in order to guarantee their independence from political parties.